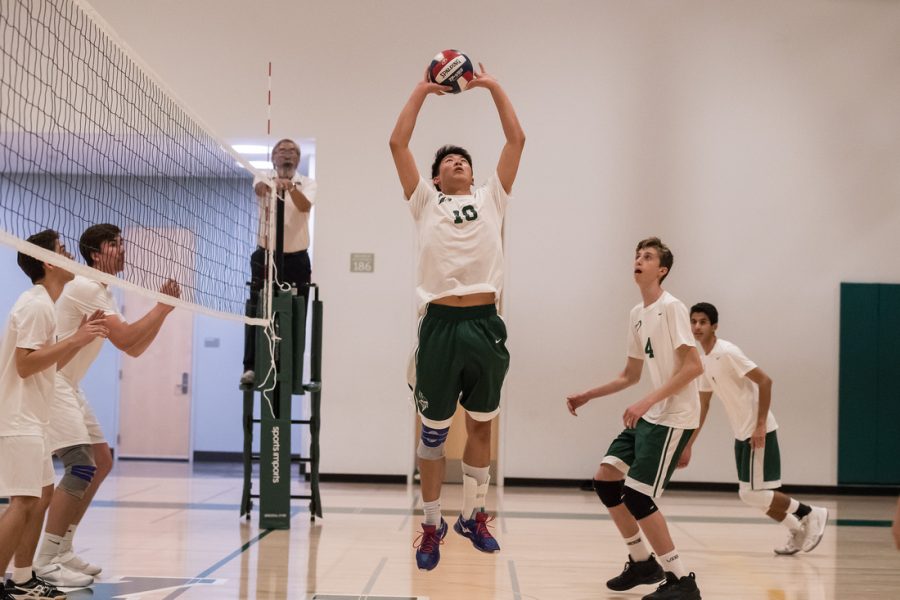 Raymond Chen (’19) sets the ball for his teammate.

The first set started out tight, each team trading points early on. After some lengthy rallies and missed serves by ECP, Paly took the lead eight to five. With consistent serves from Miles Schulman (‘19) and Raymond Chen (‘19), the Vikes continued to pull head, taking the first set 25-15.

Majors kills from Chen and Tyler Yen (‘20) put Paly up seven to three at the start of the second set. Consecutive aces from Finn Hadley put the team up 12-5 midway through the set. Multiple hits and serves out of bounds from Eastside helped Paly clinch the end of the set 25-11.

The Vikings headed into the third set up 2-0, needing only one more set to finish the game. Paly lagged at the start of the set, down 4-8 a one point. After some hard fought rallies the Vikes bounced back with some aggressive hits, putting them up 14-11. Paly went on to win the set 25-14, consequently winning the game 3-0.

“A lot of people stepped up today” Chen said, “we overall played pretty well and I got more serves in that usual which was good”.

With this win the Vikings now have a 5-5 record in league. The Palo Alto boys volleyball team faces off against Kings Academy on Friday night, they will be playing away at 6:45.