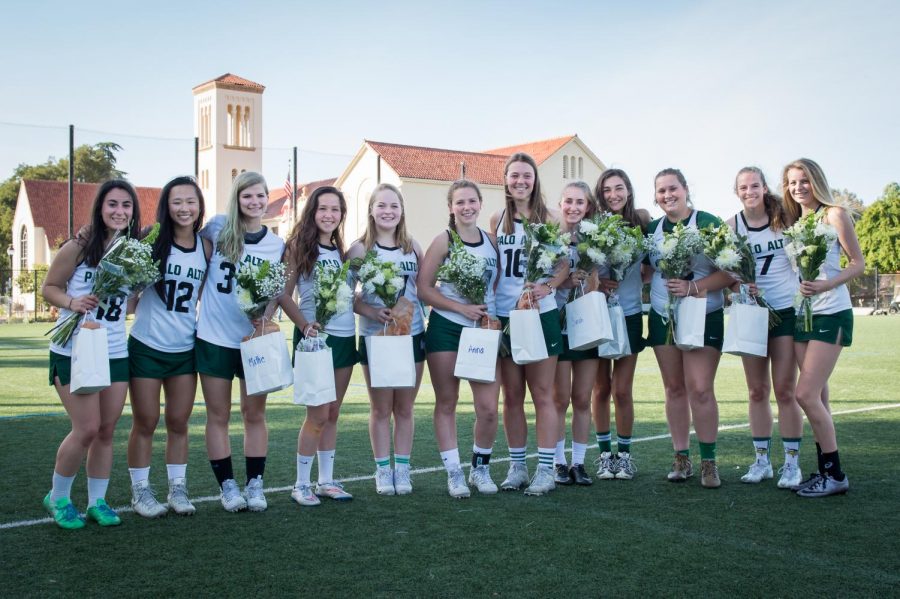 The girls lacrosse team closed their regular season play with a decisive victory over Wilcox Friday night. The win was extra special, as it was senior night for the team.

The goal gap widened early on, with the Vikes leading 5-0 only seven minutes into the first half and the team went into the half already leading 11-0.

Because it was senior night, the goal was to get all of the 12 seniors to score and the team ended up accomplishing this. The highlight of the game came when goalie Mattie Orloff (‘18) played in the field in the second half and scored as her team erupted with cheer and surrounded her.

Coach Jamie Nesbitt used this game as a way to honor the seniors.

“We have 12 [seniors] which conveniently is the same number of people on the field so luckily all the seniors got a chance to start and end the game too,” Nesbitt said.

The win over Wilcox closed regular league play for the Vikes and now they look to prepare for playoffs.

“Our next game is a playoff game against Los Gatos, who we’ve lost to twice now, but we were really close in the last game so we know that we can beat them,” Emma Staiger (‘18) said. “It’ll be an intense game so we’re gonna keep taking care of business as usual and work hard in practice and just get ready mentally for the game.”

Nesbitt believes that 50-50 possessions are the key to securing the playoff victory.

“We definitely have to work on the 50-50 possessions because those are going to be super important,” Nesbitt said. “The goal is to just possess the ball more than the other team. All the teams left in the playoffs are teams that you don’t want to be on defense against.”

The girls lacrosse team faces Los Gatos away Wednesday at 7pm in their first playoff game.