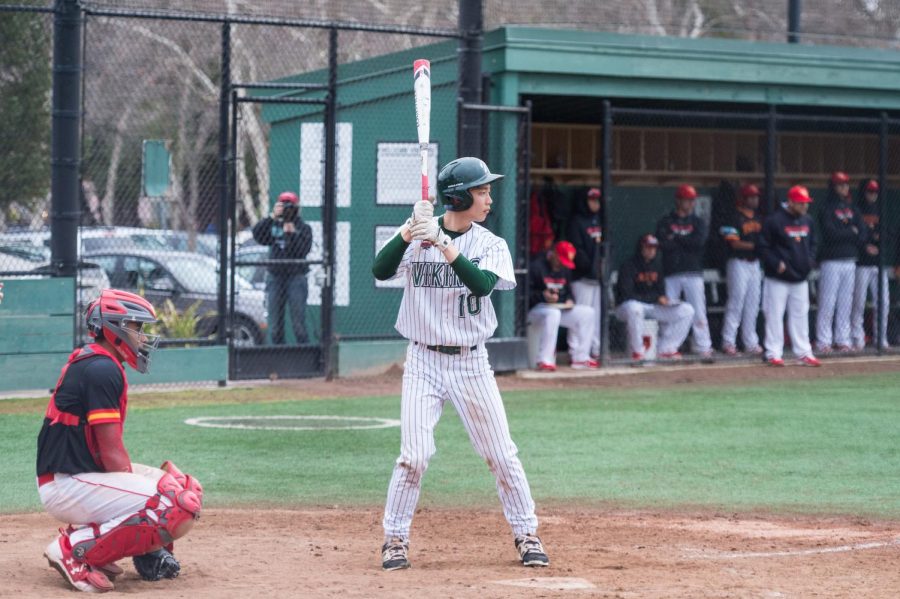 Hyunwoo Roh bats in an earlier game in the season against Willow Glen.

The Vikings routed Cupertino for the second straight time in three days, with a final score of 16-1 led by Hyunwoo Roh’s (’19) outstanding performance in pitching a complete game.

Cupertino didn’t have much to look forward to arriving at the Paly fields; just two days before, they’d lost handily to Paly, with the game ending 0-11 for the Pioneers. Despite a chance to show they could come back from a tough loss, it seemed that Paly was just the better team: the result was much of the same, with a resounding victory for the Vikings that manifested as early as the first inning. Within 20 minutes of the game’s start, Paly was up 5-0, with Cupertino having already committed an error.

With the game, Paly extended their win streak to six games, bringing their record to a competitive 6-2 – their only two losses were suffered at the beginning of the season, and the team seems to have taken notice since. Cupertino, however, dropped to 4-4, with half of their losses sourced from Palo Alto.

“I feel like we definitely have Cupertino’s number,” Josh Kasevich (’19) said. “In my four years playing, I don’t think we’ve lost to them once, and we’ve beaten them pretty easily every game.”

Kasevich himself was responsible for four runs, with two runs batted in, and batted an impressive average of .800. However, he’s not concerning himself too much with averages just yet, although on the season to date, his batting average is .455 – a number which, if he could sustain a figure close to it throughout the season, would represent a hallmark season. Even if such a high average doesn’t continue for the entire season – baseball’s season is long, and elite figures are hard to keep up – he’s shown consistent improvement throughout his three seasons on varsity, going from .230 to .398 to .455 now.

“It’s pretty early in the season, so average doesn’t mean that much, but in the offseason, just a lot of hard work and hitting every day [has helped],” Kasevich said with respect to his steady climb.

Matthew Coren (’21) also shined, with 4 runs batted in and a perfect five-for-five at-bat.

But the most notable performance of the night came from Roh: he pitched all seven innings, and still contributed an RBI. For Roh, tonight’s performance isn’t an anomaly; he’s shown a consistent ability to shine both in the batter’s box and on the pitching mound. Although again, it’s early in the season, throughout his career he’s batted at an average that hovers right around .300 – this season, he’s at .333. It’s rare to find a player with a strong ability in both pitching and batting, but Roh never claimed to be a common player.

“I was always both a pitcher and an outfielder, but I was stuck with pretty big injuries the past two years,” Roh said. “This year, I feel healthy and without any body parts bothering me I feel like I can hit, pitch, and field well. It feels good knowing that you can contribute to the team in multiple ways.”

And despite the normal exhaustion that would accompany pitching a complete game, Roh has managed to find a sweet spot between concentrating on technique and not thinking too hard about his pitching. This, he said, is the key to performing through all seven innings, not just the first couple.

“Usually it’s pretty tiring throwing seven full innings, but today I focused on command of my pitches which helped me lower my pitch count,” Roh said. “I think hitting kind of helps me out with pitching sometimes, because the hitting/running aspect gets my legs going which keeps my body from getting cold. For me, trying not to think about a lot of things helps me stay focused throughout the game. Pitching in the game is really based on feel, so clearing my head helps me stay in it.”

Ultimately, no matter who’s having a highlight-reel performance, the team camaraderie proves to be the most important.

The Vikings (6-2) look to extend their win streak to seven against the undefeated Sacred Heart Cathedral Preparatory (4-0) at Palo Alto High School tomorrow at 2:00 pm.