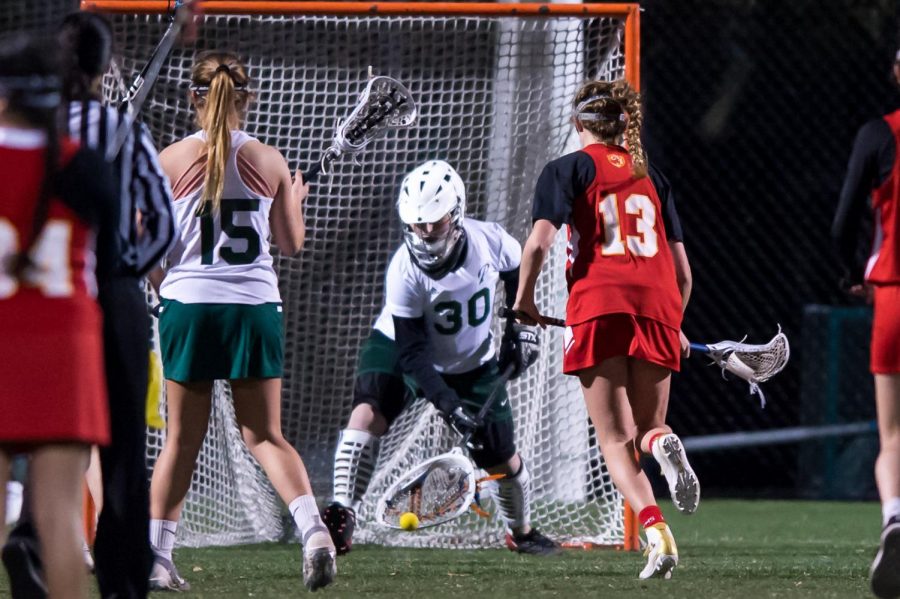 Ten seconds into the game, Phoebe Kim (22’) put the Girls Varsity Lacrosse team up 1-0 over Willow Glen. The game already looked like it would be a quick blowout win. Paly’s defense shut down Willow Glen’s attack gave the ball back to Paly’s offense who quickly scored again. Two goals from Abby Ramsey (19’) another from Kim. Lucy Nemerov (20’) chipped in, scoring her sole goal of the game.

In just over four minutes, Paly built a 5-0 lead. The lead vanished just as quickly as it appeared.

Suddenly the defense stumbled and over the next six minutes, Willow Glen caught up to Paly, scoring the next five goals of the game.

“I think that’s where we messed up because after the first five goals and it was 5-1, we kind of thought we had it in the back and could relax and they got the draw fright after our fifth goal and kind of fast break the next four goals. I think we kind of panicked a little” said defender Teagan Felt (19). “We really struggled with communication and crashing early as well as moving around fast”

Despite the early struggles, the defense found their footing again with fifteen minutes left. The momentum then swung back to Paly’s side. Ramsey completed her first of two hat tricks to put the Vikings back on top before scoring again four minutes later to extend Paly’s lead to two.

“I think the team played pretty well and there is still a lot we can work on especially when it comes to Gatos and Gunn, our more competitive teams” said Abby Ramsey (19’).
Going into the half, Paly rebuilt its earlier lead and was up 12-6. The 2nd half was all Vikings. Five different players scored in the 2nd half while the defense finally shut down Willow Glen’s offense. As the game ended, the Vikings walked off the field after completing a 20-8 blowout.

At the end of the game, Ramsey scored a season high seven goals, five of which were scored in the first half. Not to be out done, Kim scored five goals, with four coming in the 1st half. Laney Henry (21’) also contributed to the blowout win with four goals, splitting them evenly among the halfs.

Moving on to the future, the Vikings are look forward to improve on their defense for league play.
“I think we need to work a lot on communication, especially on defense, we’re not a team yet on defense and we don’t talk, we don’t send things together. On attack just settling the ball and just having the ball in our stick” said Ramsey.