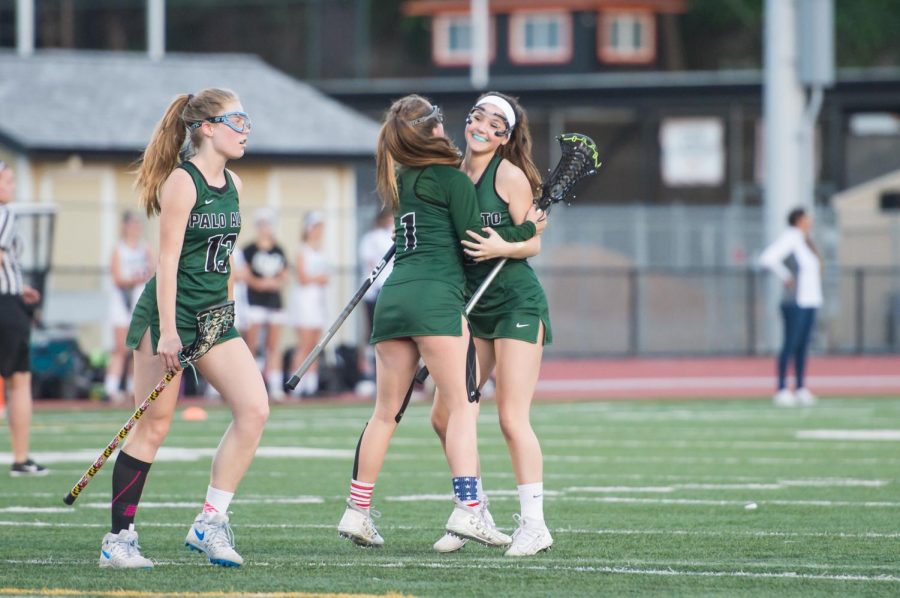 After a tough start to their season, losing their first three games to St. Francis, Castilleja, and Mitty respectively, the girls lacrosse team is now on a tear. Two consecutive blowouts to Willow Glen (20-8) and Wilcox (16-0) have the girls rejuvenated on the field.

Some team chemistry the girls seemed to be lacking early on the season made itself apparent on the field Wednesday night. From the opening minutes it was clear Paly was in total control of the game; unbeaten on draws and outpacing the opposition, the ball almost never left the Paly offensive side of the field.

“We were playing more relaxed then in previous games, the team was more spirited, lifting each other up with every little accomplishment” said midfielder Laney Henry (‘21). “We felt more like a team this game and were able to just have fun.”

Paly came out firing, scoring 7 goals before Wilcox even got the ball onto their side of the field.

Five minutes into the game, victory was inevitable and Coach Jamie Nesbitt decided to let her team switch up their positions. For example, Elyssa Holman (‘19), typically a Paly defender, got her shot on offense, an opportunity she took advantage of. Set up by a play called “Pop”, Holman was isolated 1v1 against her opponent, and despite her lack of game experience on the offensive side of the ball, she scored with ease.

“It’s always great to see everyone get a chance to score” said Henry. “The defenders never really get the chance to get the same attention as the offense, even though they put in the same amount work.”

Henry contributed to the 16-0 blowout effort herself with a hat trick and a barrage of assists. With their spirits high and heads high, the girls team looks favorable heading into a tough game against Menlo this Thursday.

“We need to work on bouncing back from adversity, rather than putting our heads down we need to bond together and play with real love… if you know you know” said Henry.