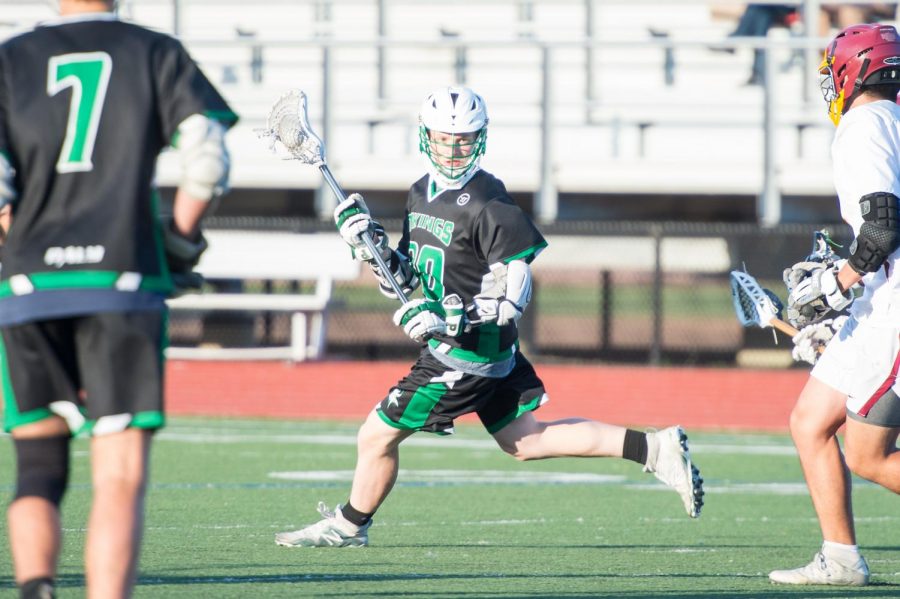 Dwight dominating on the lacrosse field.

A bead of sweat falls from his cheek as he runs to pick up the ball. Quintin Dwight (‘20) scoops through and lets it rip. The ball slides right past the goalie’s right shoulder and hits the back of the net. Goal. The sideline explodes. They lead Saint Francis by 2 goals with 30 seconds to go in the game. A game that Paly entered as underdogs, they were able to win 7-5 thanks to Dwight’s stellar performance, netting a total of two goals and getting an assist in the contest.

Dwight is a prominent member of both the Varsity Lacrosse and captain of the Robotics team that he and a couple of friends started called Garage Robotics. After participating with the Paly robotics teams last year, he chose to start his own team. “Starting my own team allowed me to have more flexibility and fulfill commitments that I have for both teams” Dwight said. Garage Robotics is a team of ten members who meet every day during the season to build robots that perform tasks and then participate in regional competitions. They were 7-14 in official play this year according to The Blue Alliance. Outside of robotics, he’s been on the Varsity lacrosse squad since his sophomore year and has been a key member of the team’s recent successes. Starting as the X attackman alongside Cole Sotnick (‘19) and Macguire Ferrell (‘20), Quintin was the highest scorer of the bunch, finishing the season with an astounding 56 goals. He led the team to a 15-4 record and another SCVAL championship. Dwight is a certified Viking alpha.

All these commitments are extremely time-consuming, and Dwight oftentimes found himself overwhelmed with everything he had to do. “Time was definitely something that got tight in the heat of both seasons, it was difficult to find time to do my schoolwork since most of the time I was either at PALY or the garage. I would have loved to have an extra hour or so in the day” Dwight said. “After school, I would head over to the garage and check up on the team, go to practice, and sometimes come back working into the night. It was hard to do homework at the same time and also maintain a healthy sleep schedule, which in my opinion is one of the most important things you can do.” Although it can be difficult at times, Dwight has displayed his talent for both activities, and he hopes to continue next year.