Brief: Baseball drops third in a row with loss to Serra – The Viking Magazine
MENU

Brief: Baseball drops third in a row with loss to Serra 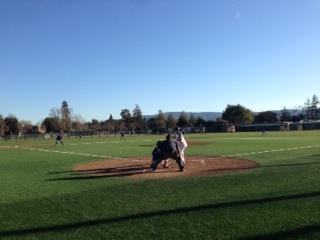 In a game filled with errors, three relief pitchers and only two runs, the Vikings were unable to find much consistency throughout the game.

The Vikings found themselves in a hole, trailing to the Padres 4-0 at the top of the fourth. Though down, the game didn’t seem to be too out of reach for the Vikings as, despite producing zero runs, the Vikes were able to drill some major hits. However, the thought of a Viking comeback slipped away, when in the fourth inning, a Padre hit a grand slam to far left field, doubling their score to 8-0 as the Vikings headed into the bottom of the fourth.

The Vikings could only match one of Serra’s four runs scored in the fourth, when Michael Strong (’13) managed to steal home base as the Padres catcher mishandled an incoming pitch.

As the last three innings ran on, both the Padres and Vikings managed to add on only one run.

With a final score of 9-2, the Vikings take on their third loss of the season.

Palo Alto will look to snap the three game drag as they travel to the San Jose Municipal to take on Evergreen Valley, Thursday night at 6 p.m.

Brief: Baseball drops third in a row with loss to Serra