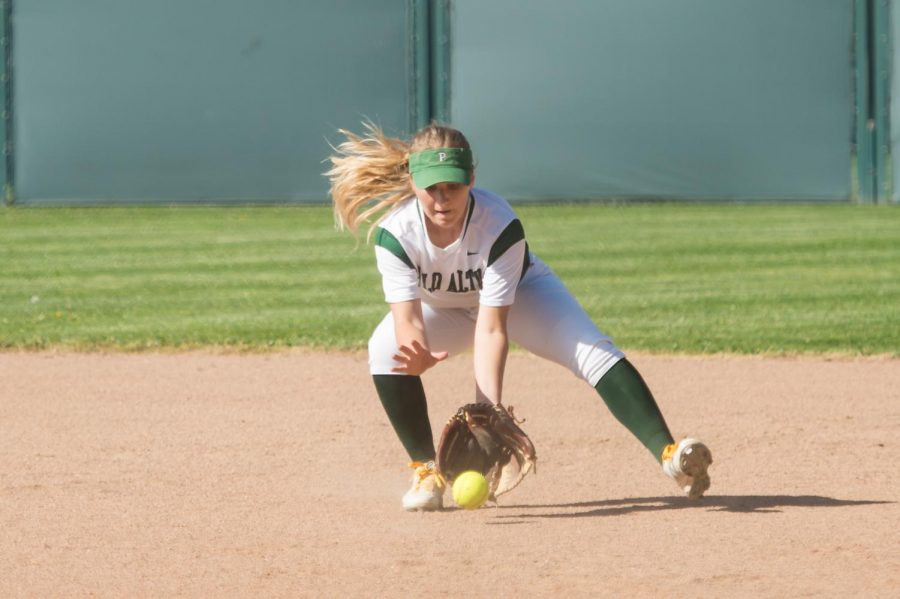 After a slow start and a few back-and-forth innings, the Los Altos Eagles came out on top with a 7-5 victory over Palo Alto this Friday on Senior Night.

The game began differently from the ones that came before it this season, as Coach Brooke Binkley lead the team in celebrating the efforts of Paly softball’s class of 2018. Seniors Sophie Frick, Emilee Guzman, Sam McBride, and Elizabeth Schnaubelt were honored with speeches and posters made lovingly by their teammates before the first pitch was thrown.

The game began with strong defensive showings by both teams, leaving the Eagles and Vikings alike unable to score. This trend continued into the second inning, with Los Altos’ batters getting shut down with a quick three outs, but firing right back and preventing Paly from ending the inning on top.

The bottom of the third displayed some of the Vikes’ offensive prowess with some strong hits, but Los Altos was able to catch a few important pop flies and the score remained 0-0.

During the fourth inning, the tone changed; Los Altos kicked it off with an especially strong single and continued hitting well for the rest of their at-bats. Four runs were scored in quick succession, forcing the Lady Vikes to come from behind when it was their turn to step up to the plate. Two strong RBIs by Guzman and Ella Jones (‘20) gave the team some confidence, and the inning ended with a powerful double by McBride bringing two runners home and evening the score.

Both teams seemed inflated by their successes, and both scored a run each in the fifth inning, causing fans to remain on the edge of their seats as each batter stepped up to the plate. This back-and-forth nature continued in the sixth, but each team’s defensive play managed to make it impossible for runs to be scored. Frick had a strong showing at shortstop, tagging out a runner at second as well as catching a difficult fly ball, accounting for two of the three outs.

Los Altos began the seventh inning fired up and ready to score and proceeded to do just that. With a string of strong hits, the Eagles managed to score two runs and dared the Vikings to come back. Palo Alto attempted to fire back but got their three requisite outs soon after the bottom of the sixth began. The game ended with a score of 7-5.

Palo Alto softball plays again against Wilcox at 4:00 on May 8 in Santa Clara.

About the Contributors
Sabrina Hall, Editor-in-Chief