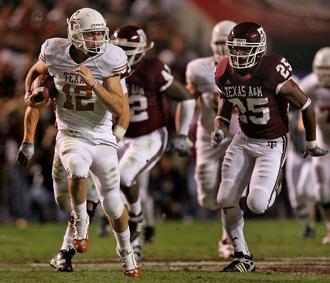 The Texas A&M game was a heated instate rivalry match. If Texas A&M joins the SEC, the two teams will likely not square off in the near future.

Colorado did it, Nebraska did it, and now Texas A&M is trying to follow suit.  After watching former conference members exit the Big 12 Conference to join the now Pacific 12 and Big 10 conferences, Texas A&M has made up its mind to leave as well.

The proposed move is just another step in the new era of the ‘super conference’, in which football programs are leaving one conference to join a new one that schools may perceive as more lucrative.

These switches in the past have brought a lot of controversy, and the possible Texas A&M exodus would be no different.  With the threat of Big 12 schools suing, Texas A&M will still try to enter the Southeastern Conference (SEC), but to what avail?

The Texas A&M Aggies football team, currently ranked seventh in the nation, has long lived in the shadow of rivals Oklahoma and the University of Texas.  The Aggies, who have only finished over .500 (winning percentage) four times since 2002, have never been able to climb atop the competitive Big 12.

Knowing these facts, entering the SEC, arguably the best conference in football, may not be the best idea.

All but one SEC West team finished above .500 last season, including the national title winning Auburn team.  The Big 12 was a strong conference, but the SEC has unmatched depth, top to bottom.  Having found little recent success in the Big 12, I cannot see the Aggies finding any future breakout seasons in the SEC.  For a team that has not won a bowl game since the 2001 Galleyfurniture.com bowl versus Texas Christian University, this move could kill any momentum the team has gained in recent years.

On top of the fact that this move may represent a step back in Texas A&M football, it will also kill tradition.  The instate rivalry between the University of Texas and Texas A&M was always exciting to watch, but with the proposed switch the two teams will rarely face each other.  This would be a crushing blow to Big 12 tradition, after loosing Nebraska, a former powerhouse, to the Big 10 Conference.

Long story short, this conference change benefits no one.  Texas A&M fans will have to suffer through losing season after season, and the Big 12 loses a long time member.  And what does the SEC gain?  Just more depth, but nothing spectacular.

Texas A&M may end up in the SEC, but how much with college football benefit from this?