The Viking Magazine • May 12, 2013 • https://vikingsportsmag.com/top-stories/2013/05/12/girls-lacrosse-loses-early-lead-drops-league-championship-in-triple-overtime/ 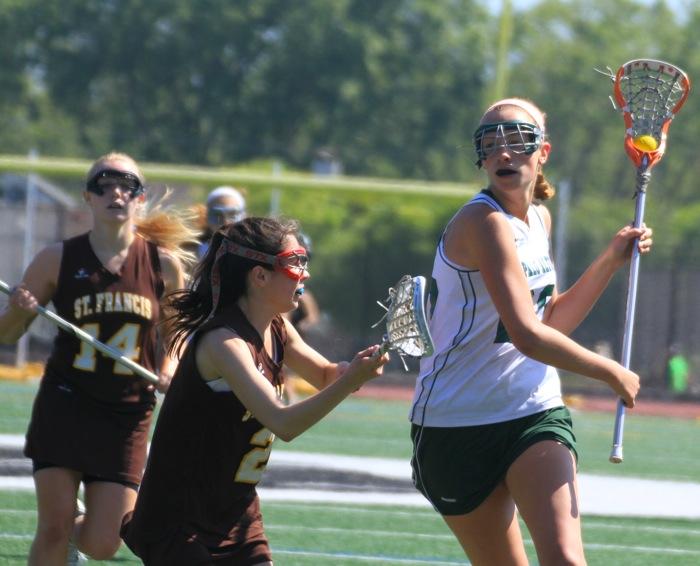 Simone Buteau ('13) cradles the ball as she dodges the St. Francis defense. Paly defeated the Lancers twice in the regular season before falling to St. Francis in the league championship.

In sudden death triple overtime, the Paly girls’ lacrosse team dropped a heartbreaker to the St. Francis Lancers in the Santa Clara Valley Athletic League (SCVAL) championship Saturday at Burlingame High School. The Vikings led the game 9-3 at halftime before the Lancers responded in the second half, outscoring Paly 10-4 and tying the game at 13-13 in the final minute of regulation.

“When we ended half time we were up by a lot and we were all really excited about it,” team member Kristen DeStefano (‘14) said. “We kind of thought, ‘If we keep up the intensity, we got this. There’s no way we aren’t going to win.’”

Unfortunately for the Vikings, St. Francis, whom Paly had defeated twice in the regular season, completed their comeback with the overtime win to become league champions.

The Vikings struck first in the game with a goal from Julia Farino (‘13) in the first minute of play. St. Francis responded to tie the game at 1-1, but Paly dominated the field for the remainder of the period. Five Vikings contributed to Paly’s lopsided 9-3 lead over the Lancers going into the half.

St. Francis came out with a vengeance after halftime, scoring first 2:32 into the period. Nina Kelty (‘13) struck less than 30 seconds later for the Vikings to maintain Paly’s 6-goal lead, and more back-and-forth scoring put Paly up 13-7 with 8:39 to play.

Momentum then swung to St. Francis as they went on to net 6 unanswered goals, typing up the game in the final seconds of regulation. With the score at 13-13, the Vikings and Lancers headed into overtime.

Neither team was able to secure the win in the first 3:00 overtime period, as both St. Francis and Paly scored to keep the game tied and force a second overtime period. In double overtime the Lancers again struck first to go up 15-14, but a penalty drawn by Anna Dairaghi (‘13) forced the St. Francis goalie out of the net, leading to a Paly goal and tying the game as time expired.

The Vikings and the Lancers entered sudden-death triple overtime period with the score at 15-15. St. Francis was able to score before the Vikings, securing the league champion title.

Though the loss was heartbreaking, the Paly team was able to hold their heads high and celebrate the positives.

“The thing that was brought up a lot [after the game] was that all of us knew we should have won,” DeStefano said. “But we actually did kind of win. Our team is like family and we have the strongest bond and throughout the season we’ve become a family and that is the whole thing. It’s better than winning.”