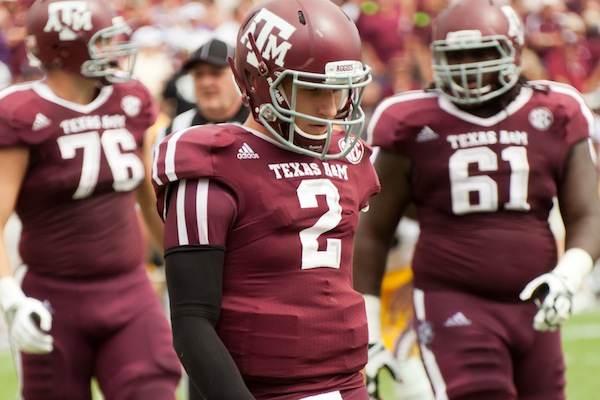 Johnny Manziel, winner of the 2013 Heisman trophy, is facing controversy and suspension from the NCAA after allegedly selling signed memorabilia to fans.

We’ve all heard the nicknames for last year’s Heisman trophy winner. But when was the last time you heard someone acknowledge the young phenomenon simply as a college student?

It’s hard to acknowledge Manziel as a college student; something that the public, and even he, seems to forget.

Despite college football not kicking off for another week, Johnny Manziel – the college student – has managed to keep his name around and not in a good light.

It was just after Texas A&M’s victory at the Cotton Bowl that Johnny Football’s offseason shenanigans began.

Manziel’s inappropriate actions included shoving a graduate assistant after throwing an interception, tweeting (later deleting) his thoughts about leaving College Station and taking time off to attend Game 2 of the NBA Finals. Later, Manziel dropped out of the Manning Passing Academy and plead guilty to a bar fight charge.

After his first series of inappropriate actions, Manziel decided to attend a fraternity party at the University of Texas at Austin. Manziel, an archrival of the Longhorns, was well aware that the folks over in Austin genuinely disliked him; what prompted him to go down to a fraternity party there?

Labeled a preseason All-American and widely held as a star on the Aggie roster, going to the frat party was not only an ignorant choice, but a dangerous one. Naturally, the frat members got territorial and challenged Manziel, reportedly throwing beer cans at the Aggie quarterback.

While attending the fraternity party was a mistake, Manziel is now facing legal trouble with the NCAA, being accused of signing memorabilia in return for a “five-figure flat fee,” according to USA Today. A total violation of NCAA code, collegiate athletes are not allowed to profit off their own name.

Manziel’s situation is somewhat understandable; after all, he’s technically a college kid. He’s trying to have fun, and it’s unfortunate that the media is on to his every move. But as a Heisman winner and profound athlete, it’s inevitable that all eyes will be on him. And when you are awarded the greatest prize in college football there’s an code of conduct that awardees should follow.

It’s one thing to have a good time, but it’s completely different when Manziel represents his team and school. After putting so much effort into getting A&M in the national spotlight, why would he want to diminish his popularity?

Furthermore, Manziel comes from a wealthy Texan family, and although it may be hypocritical for the NCAA to not allow its players to profit off their own name, the man doesn’t even need this money to begin with. MAYBE it would be more justifiable if Johnny came from nothing and needed money to help his loved ones, but if he’s already rich, why go for even more?

Manziel’s irresponsible actions have put his eligibility and his team’s potential season in serious jeopardy.

The A&M team has a whole 2013 ahead of it, coated with colossal expectations. Without Johnny Football behind center, hopes for a national title, let alone a bowl appearance, are slim.

Let’s not put the reigning Heisman down completely though; Johnny Manziel has demonstrated great character before. It’s unfortunate that Jonny ‘college kid’ has found himself in such a situation, but hopefully, he’ll find a way to dig himself out of his legal issues. Manziel needs time to set his priorities and to realize what’s most important for his football future, however, if he does end up getting suspended, the Aggies will surely have a hard time replacing QB1.

8/28/13 UPDATE: The NCAA penalized Manziel with a single half-game suspension against Rice University in Texas A&M’s season opener. Manziel will stay a member of the Aggies for the 2013-2014 season with no other ensuing penalties.