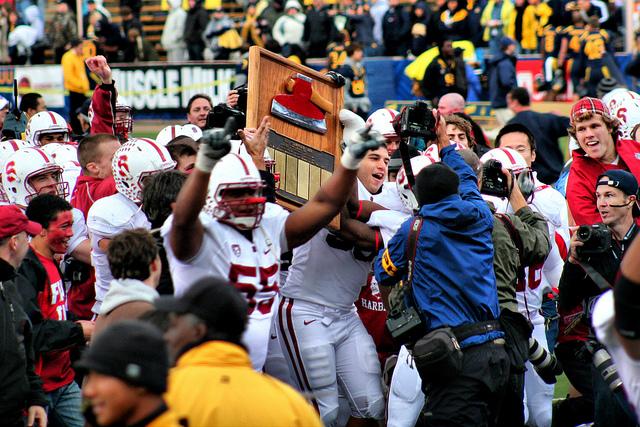 There really aren’t many things that I love as much as college football. Questionably better than my prized Chick-Fil-A, it’s easy for me to acknowledge the month of September, of college football, as the most wonderful time of year.

This year, it didn’t take long for the action to get rolling. With shocking outcomes, huge upsets, and several teams left disappointed, this hectic time of football madness has left me craving Saturday game days the second Sunday morning comes around.

Although several teams asserted their dominance this weekend with some impressive performances, it’s a long season and anything can happen. Now here’s my spiel about the college football season kick-off.

Eight FCS teams took down their FBS opponent in week one’s exhibitions. Most notably, Oregon State’s three point loss to Eastern Washington and Kansas State’s loss to the defending FCS Champion, North Dakota State. I though that Oregon State, a team that finished No. 20 in the country came off their best season in the last decade, and its dynamic receivers in Markus Wheaton and Brandin Cooks would give a team like my Stanford Cardinal a run for their money. Never would I have believed that one of my Pac-12 powerhouses would start off with a loss to an FCS team. And Kansas State? Weren’t they briefly ranked No. 1 and just in a BCS bowl game last year? Disappointing.

Five forced turnovers? Check. Beating your in-state rival? Check. Knocking off the #12 ranked team in the nation? Got heem! Hats off to “The U” for grinding out a defensive battle with The Gators. The Miami Hurricanes’ exceptional effort propelled them into the AP Top 25 for the first time since 2010, boosting them ahead as the No. 15 squad. As for The Gators? Head coach Will Muschamp has got to give us a reason to believe that The Gators are on the rise again. After Louisville humiliated the Gators in the 2013 Sugar Bowl, this loss sends Florida back to the drawing board.

The Ohio State University sure took care of business hauling in a dominant 42-7 win over San Diego State. Now 2-0, they look to be unstoppable, right? Well, they’re also without their QB1, Braxton Miller. Early in the matchup the Heisman hopeful took came off the field after a bone chilling sack with what was reported to be a knee injury. Now, before any Buckeye fans get too flustered, Ohio State showed that the loss of Miller would not slow their offensive juggernaut as backup quarterback Ken Guiton threw for 152 yards and a pair of TD’s to secure the win. Miller, expected to return next week, will surely want to help lead his team back to another undefeated season.

How bout’ that ACC? In week one we saw Virginia Tech give the mighty Alabama squad a little more trouble than the Tide, and most of us, expected. Unranked Miami took down the highly regarded Gators squad, and soon after, the No. 8 Clemson Tigers knocked down the No. 5 Georgia Bulldogs, 38-35,  in what was one of my favorite exhibitions in college football. In what has been an SEC dominated decade, maybe it’ll be the Atlantic Coast that will come away will a National Championship.

Week one’s matchup with Vanderbilt showed us that the Rebels of Ole Miss are going to be a force to be reckoned with. One for the ages, Mississippi’s extremely young and talented squad bested Vandy, led by quarterback and Silicon Valley native Austin Carta-Samuels. Making headlines across the nation for the game they played and recognized by drawing their first top 25 ranking in a number of years, watch out for the Rebels this year.

Hail to the Victors

Notre Dame at Michigan. One of the great college rivalries. Always a great game I look forward to. This year’s match up was reminiscent of the last time Michigan hosted the Fighting Irish in the Big House; a game that looked like it was over until a late Notre Dame attempted comeback. Shout out to Wolverines quarterback Devin Gardner; I was wildly entertained. Wasn’t he a wide receiver last year? This guy can do it all. I couldn’t imagine a better ending to such a rivalry.