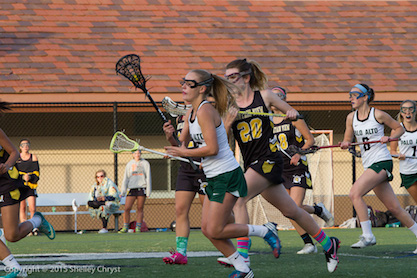 On its senior night, girls’ lacrosse trounced Mountain View with a final score of 16-2. “I think we did a really good job with transitions, moving the ball around and not forcing it, and waiting for the open shot,” Lauren Gargiulo (‘15) said.

The game started off strong for Paly, with fast hits down the field to Mountain View’s goal. A pass by Paige Bara (‘15) allowed for Allie Peery (‘15) to score the first goal of the game. In the face-off, Bara maneuvered the ball to the Vikings’ offense, where the team was then able to thunder past the Spartan’s line of defense. A pass from Maya Benatar (‘16) to Claire Chevalier (‘15), then back to Benatar, allowed for the Vikings to bring their lead up by making the score 2-0 with 23:15 left on the clock.

Following several calls made against Paly, Benatar took the ball down the field and passed to Bara, who scored. An intercepted pass from Paly brought the ball down to Paly’s goal, but Mountain View dropped the ball in the middle of the field before making it. After defensive moves by Paly players failed to keep back the team, a check made by Paly gave Mountain View the opportunity to get ahead. However, the team was unsuccessful and Lisa Rogge (‘15) took the ball back down the field.

As the game continued, so did Paly’s offensive power over their opponents. After making her way through Mountain View’s line of defenders, Bara got checked and had a clear shot at the goal; successful in the shot, she made the score 4-0. Bara and Chevalier followed with two more goals. The Vikings were able to quickly recover from shots on goal with passes by Paige Anderson (‘15), Sarah McDonnell (‘15) and Reid Walters (‘16). In addition, Peery took several shots on goal before scoring twice for the Vikings, making the score 8-0.

Nearing the end of the half, Rogge and Chevalier were successful in their attempts on goal. As the first half drew to a close, the score was 10-0 with the Vikings in the lead. Within the first 40 seconds of the second half, Gargiulo made the score 11-0, with a continuingly strong lead for Paly. Even with a check called against the Vikings, the team was able to keep the ball off its side of the field for the first 5 minutes of the second half. A minor moment of weak defense allowed for Mountain View to press on Paly’s goal, but Peery quickly sprinted across the field. Gargiulo scored the twelfth goal for the Vikings. After receiving a pass from behind the goal, Peery scored for the Vikes to make the score 13-0. Amalia Roth (‘15) scored the fifteenth goal of the game after a foul was called, giving her a clear shot at the goal. The Spartans put pressure on the Vikings three-quarters of the way through the second half, and had an opportunity to score when a player was checked by a Paly player.

Roth notes that the team’s undefeated record can be partially attributed to the high level of communication between the players.

“We communicated really well on both defense and offense and kept our spacing, which allowed us to have good offensive plays,” Roth said. “We have really good team chemistry in general, and that has allowed us to play really well together.”

As the team continues on, Roth hopes that the team’s record can remain untarnished. “I hope that we can stay number one and keep winning,” Roth said. “We have an undefeated season right now, so we’re just trying to keep that up.”

Girls’ lacrosse will next play in SCVAL championships.