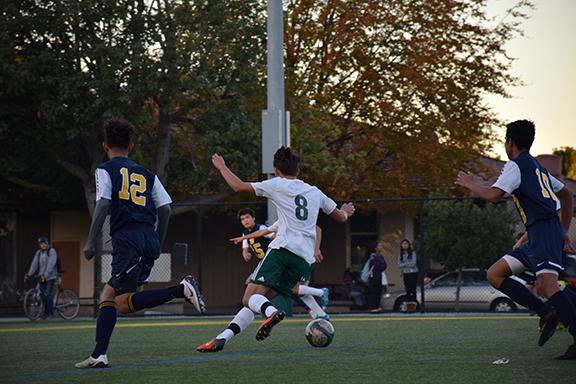 Paly boys’ soccer triumphed over Milpitas High School with a final score of 9-0. Within the first three minutes of the first half of the game, Jason Shorin (‘19) scored the first of the nine goals. Shortly after, Neil Verwillow (‘17) made two goals, both from free kicks off of penalties from Milpitas which brought the score to 3-0. The third free kick by Verwillow, however, did not make it in the goal.

Paly’s defense fought strong, preventing Milpitas to reach the goalie box until the last seven minutes of the first half. After a goal from Jack Stoksik (‘17), Marco Tan (‘19) secured their lead with two more goals. This ended the first half with a score of 6-0.

Only four minutes into the second half of the game, Stoksik makes his second goal of the game, expanding the gap between the scores. Yahli Malchin (‘17) kicks the ball in the far right corner of the goal, bringing the score to 8-0.

Defense keeps up their strong efforts with Isaiah Schoenberger (‘19) falling on the ground to save the ball and Derek Schoenberger (‘17) charging after Milpitas. Offense continues to fight with Ethan Ho (‘17) scoring the ninth goal of the game.

Milpitas received a yellow card for tripping Marcel Sano Colchen (‘17), having to be walked off the field. Malchin’s leg cramped up in the final minute of the game, resulting in the ref ending the game early. The final score of the game was 9-0 with the Vikings dominating over Milpitas.

Malchin commented on how he think the game went.

“It was a hard fought battle, a great start to the season and we scored some bangers so that’s always good,” Malchin said.

Stoksik commented on how his team could improve for upcoming games.

The team will play again today at 3:30 against Carlmont.