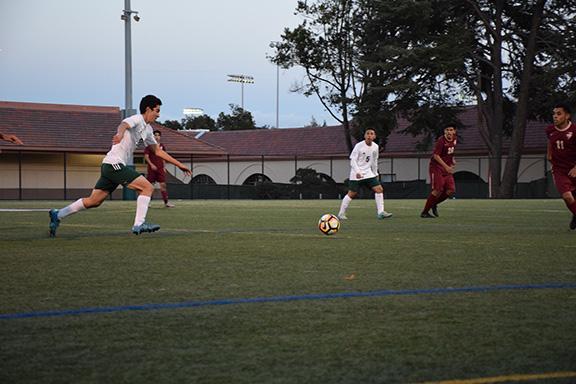 Paly started off with the ball and Michel-Ange Siaba (‘17) quickly took hold of the ball. Siaba was the goalie for the entire game with multiple saves from Menlo-Atherton’s strong shots at the goal.

With two minutes left in the first half of the game, Verwillow was hit in the throat by an MA player’s shoulder. He was down on the turf for a couple of minutes.

“I heard a pop and then the back of my neck started having muscle spasms… I couldn’t breathe for a bit,” Verwillow said. “The trainer and the rest of the people were super cautions and professional, glad they were there.”

Verwillow was able to recover to be subbed back in the second half. During this half of the game, offense and defense continue to work hard to prevent Menlo-Atherton from scoring. They made multiple attempts, however, Siaba was able to catch the ball before going into the goal.

Verwillow commented on the team’s performance.

“I thought [in] the second half we were very focused and we managed to effectively stick to the game plan, which was obviously defensively oriented as we now had to defend the lead of the game,” Verwillow said. “That was a tough team, a team that makes it to CCS every year, so it’s a good check to see how we will be able to compete come the end of the season.”

The boys’ soccer team will play again tomorrow at home at 6 pm against Burlingame.