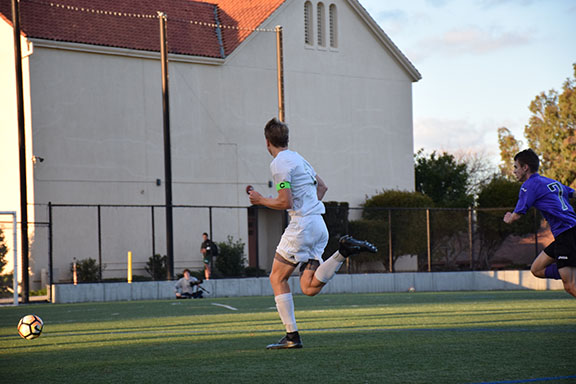 Paly won the coin toss, giving them the ball at the start of the first half. As Monta Vista gets closer to scoring, Paly defender Nathan Seto (‘19) gets the ball to the other side of the field. Yahli Malchin (‘17) takes a shot at goal, however, the Monta Vista goalie was able to stop the ball from going in the goal.

Half way through the first half, Neil Verwillow (‘17) scores the first goal of the game, putting Paly in the lead 1-0. Thomas Crouch (‘17) tries to set up Malchin for a goal when making a free kick, but the Monta Vista goalie was able to catch the ball. Isaiah Schoenberger (‘19), Nicholas Camerena (‘17) and Ethan Ho (‘17) were subbed in with 15 min left in the first half.

In the last ten minutes, Verwillow makes a second goal, bringing the score to 2-0. Crouch makes another attempt at scoring off a free kick, however, the Monta Vista goalie was able to jump up and catch the ball. With three minutes left in the first half, Schoenberger scored to put the Vikings far ahead of Monta Vista with a score of 3-0.

In the start of the second half, Crouch makes another free kick. Monta Vista made a shot at goal, however, Paly goalie Patrick McIntosh (‘19) was able to catch the ball before going in.

Verwillow was going one on one against a Monta Vista player who ended up falling giving Verwillow a chance to score. However, the ball bounced off of Monta Vista’s goalie’s legs.

Camerena scored a minute after he was subbed back in, bringing the score to 4-0. With ten minutes left in the second half, Malchin also scored, securing Paly’s lead on Monta Vista. Ho received a yellow card for being too aggressive and was taken out of the game.

After making multiple shots at goal in the second half, Michel Ange Siaba (‘17) was able to score the final goal of the game with two minutes left, making the final score 6-0.

Siaba commented on his team’s performance during the game.

“We we aggressive and clinical. This is a trend we need to keep up if we hope to make CCS,” Siaba said.

“It [the game] was solid and our offense finally started clicking again. We’ve had a real problem scoring lately so that was nice to see,” Briggs said.
Come out to the boys’ next soccer game this Thursday at 3:30pm against Los Altos.