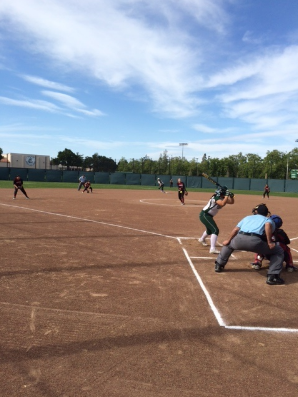 No runs were scored in the second, third, fourth, or fifth innings, but in the fourth inning Maggie Renteria (‘17) made all three outs.

The seventh inning ended with Santa Clara trying to comeback. They scored one run, but it wasn’t enough to win the game, as Paly won 3-1.

After the team’s great game, Renteria commented on the team’s performance.

“I think that we killed it today. The only thing I think we really need to work on is getting over the nervousness that we had at the beginning, because after that we were on point,” Renteria said.

“For their first game they played exceptionally well. They just need to be a little more aggressive in the batter’s box, but other than that I think it’s going to be a great season,” Binkley said.
Paly plays again on Thursday and will look to continue winning as they play against Mercy High School at 3:30 at Paly.