Off the Beaten Path

In the world of sports today, athletes are not limited to classic ball games. These unheard-of sports have yet to become as popular as their vintage counterparts. Today, there are many obscure sports that have not been discovered by the majority of the world. Here is a closer look at a few of them.

Everybody has heard of canoeing down a river, and possibly even white-water kayaking, but very few know about canoe polo. It’s an aqueous fuse of water polo, kayaking, and a bit of basketball where teams go head to head in the water. Most people recognize canoe polo from the hilariously dangerous accidents that are filmed and posted on YouTube.

Canoe polo is played in the World Games, which is basically the Olympics for the sports that do not make it into the actual Olympics. Every four years, one year after the Summer Olympics, national teams from around the world gather to compete for the chance to play in the World Championship of Canoe Polo. Other than the World Games, there are many other competitions for Canoe Polo as well.

Canoe polo players ride in a lighter and faster kayak that has better maneuverability than a regular kayak. They are equipped with a double-sided paddle for boosting themselves through the water and for blocking the ball.

The object of the game is to throw the   ball into a goal suspended two meters above the surface of the water, much like basketball. The difference is that a goal is used instead of the basket, and goaltending is legal. The goalie is the player closest to the center of the goal and they use their paddle to block the ball from going into the goal.

Benjamin Rapperport (‘19), a varsity Water Polo player from Palo Alto High School, has actually played canoe polo. He and some friends went out to Shoreline Lake to attempt the sport.

“I really like waterpolo and I love to kayak, so it seemed like a lot of fun,” Rapperport said.

The experience did not disappoint. Rapperport described the game as “super fun” and “really competitive and intense.”

Something key that he mentioned when reviewing the game was teamwork.

“Teamwork was super important because you couldn’t advance without passing, so you really relied on your team,” Rapperport said.

Much like the games of water polo and basketball, teamwork is vital in the game of passing and shooting. Teams pass the ball around, looking for openings and hoping to catch the goalie off guard.

Although it doesn’t seem like a physical sport, it is considered a contact sport because of the violent tackles and capsizing of opponents kayaks. Canoe polo is one of the entertaining and fascinating sports that many do not know about. 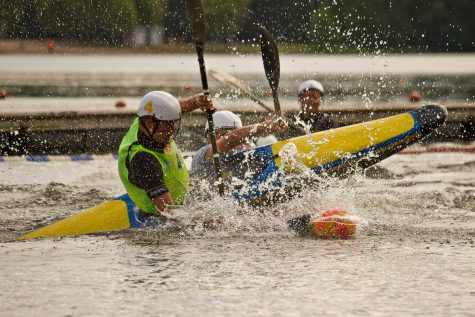 Ice hockey is one of the most played and most watched sports in the world. In the summer when there is no ice to play on people will grab their roller skates and play out in the streets. There is a new evolving variation off of the original game that has taken off in Singapore, it’s called Octopush. Many people will recognize it as underwater hockey.

Imagine playing hockey with a snorkel and a tiny little stick. You are submerged under 6-8 feet of water, but there are a few differences in the rules. It is non-contact, so a player who touches someone else gets a penalty. Many may think that you can’t get hurt  because it is underwater and non-contact. Many people suffer your typical sports injuries, but recently players have begun to get concussions which could be potentially life threatening.

Underwater hockeywas created in the United Kingdom in 1954 and has been played ever since. The first Underwater Hockey World Championship was held in Canada in 1980. It has been played pretty much every other year since then. In 1998 it was held right in our backyard in San Jose, California.

Although it has been played for over half a century, underwater hockey is one of the least known and most interesting  sports on the planet. We hope that it becomes a more mainstream sport and begins to be covered by the media.

One of the least explored sports in the world is chess-boxing, a hybrid of mental and physical strength. It blends two traditional pastimes together: chess and boxing, despite being close opposites. Chess is a mental and strategic board game in which one player attempts to checkmate their opponent, whereas boxing is a bodily fight in which the two boxers win by knocking out their opponent or by a judge decision. The two are combined into chess-boxing, in which the athletes compete in 11 alternating rounds of chess and boxing. Participants may win by checkmate, knockout in the ring, a judge’s decision, or if someone runs out of time in the chess game.

The intensity of the sport is as high as it gets. Complete focus is necessary during both the chess and boxing rounds for a successful chess boxer. The contestants must worry about winning the boxing match as well as the chess game because they can lose either way.

Different chessboxing strategies are used to play to the competitor’s strength, either the boxing or the chess. Some may use the chess rounds as time to rest before putting all their mental and physical strength in the boxing match. Others may use the boxing rounds to think about the chess game while attempting to avoid their opponent’s gloves.

Ashley Wang (‘19), a former judoka and competitive chess player, and current wrestler at Palo Alto High School, has her own thoughts on chess-boxing. As a former competitive chess player and current contact sport athlete, Wang views the combining of chess and boxing as “really cool and obviously unique,” although she also claimed it would be impossible to perfect, as “the two disciplines are too far away from each other.”

“You can obviously be good at both chess and boxing, but you need to invest 100 percent of time and effort into one thing to be even near the top,” Wang said.

Wang herself is immensely intrigued by the idea of chess-boxing, and “would totally do it.”

The beauty of the game is that it is not enough to be an amazing chess player or an incredible boxer. The athletes must be respectable in both features. If they lack in one area, it can be completely exposed and they may lose the whole match.

Chess-boxing is not a very well known sport due to its recent creation, although it is becoming more popular. Many find Chess Boxing as the ultimate sport because it features both the body and the mind. Hopefully in the future it will be covered by the media and be more well known throughout the world.