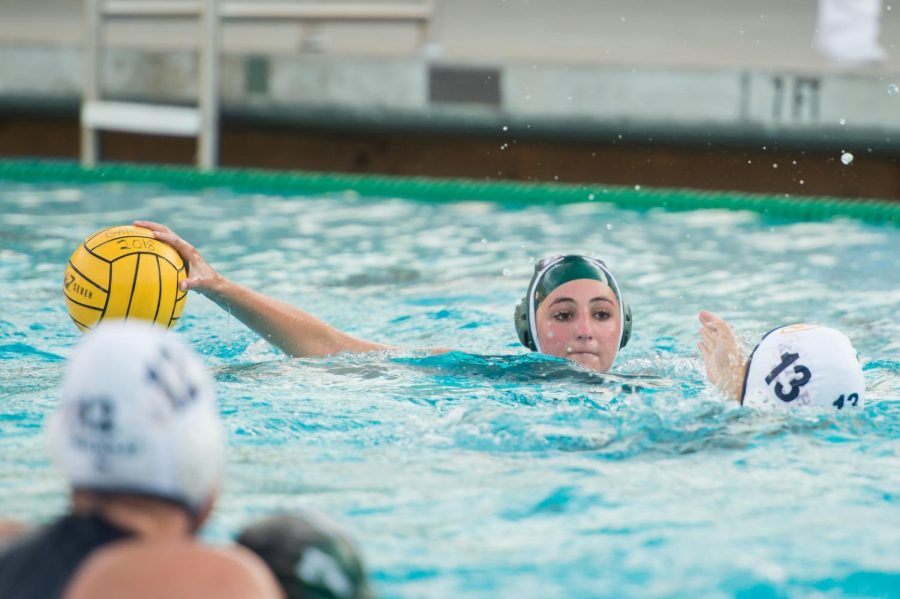 Sophie Kadifa winds up to pass

Paly’s girls water polo team faced off against rival Los Gatos at home on Thursday, resulting in an unfortunate loss 9-6.
The game started off rocky as Los Gatos pushed the pace and set the bar high with two goals right off the bat. Viking Chesnie Cheung (‘20) soon retaliated by stealing the ball from her opponent and shooting a powerful shot into the lower corner of the net. The Los Gatos goalie was unable to make the block, and Paly earned their first goal making the score 2-1.
“[We] came together to play a competitive game against a tough team,” Cheung said.
Despite their best effort, the odds were against Paly for this game. Goalie Esme Stotland (‘19) was able to make some great saves, however several turnovers due to Los Gatos’ tough defense resulted in some shots that could not be blocked. The first half ended with a score of 5-2 with Los Gatos in the lead.
“Most of their players are big threats once they get their hands on the ball,” Maya Rathore (’20) said.
In the second half, the Vikings picked up the pace. Cheung and Sophie Khadifa (‘21) were able to score a couple goals, and their teammates made several beautiful assists.
“We wanted to prove ourselves accurately as proud Vikings,” Cheung said.
Although Paly was able to step up in the second half, Los Gatos did the same. Gatos played aggressively from the start, and their toughness only increased throughout the game on both offense and defense. As a result they took the win and the Vikings lost 9-6.
“They’re really strong… and can really put the pressure on us when we’re trying to… get action going on the offensive, so that was tough,” Rathore said.
Hopefully Paly will be able to recover from this loss in their next home game against Gunn on Thursday.