Will Moragne: Straight Out of the Blind 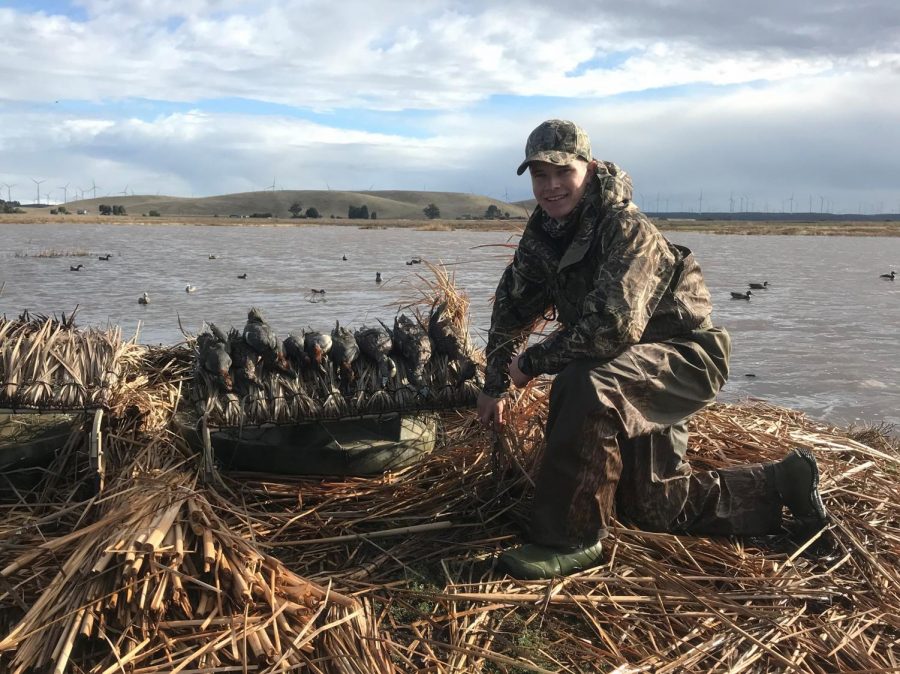 Will Moragne (’20) walks out of the Grizzly Hilton duck club with his gun slung over his shoulder, ammo in one hand and 12 rigged decoys in the other at five thirty in the morning. He steps into a jon boat, starts the 9.9 horsepower two-stroke motor, and glides away into the fog.

Moragne has had a love of hunting every since he shot his first duck four years ago. Hunting has become increasingly rarer in the Bay Area as hunting land decreases and has been developed for recreational and industrial purposes. Albeit the decrease in land for hunters over the years, Moragne has found positivity in his hunting experience.

“Hunting has definitely impacted my life for the better,” He said. “I’ve learned a lot of life skills through the hunts I have been on that help me outside of hunting.”

The gentle hum of the motor pulses through the dark as he navigates the waterways to the blind, guided by a beaming light at the front of the boat. Once he is in the pond, he stashes his boat in the cattails and gently wades to the blind. It’s now six in the morning, and he has well over a half hour to get set up before shoot time.

Moragne wakes up early in the morning, sometimes as early as four thirty, to get up and hunt, but he is motivated by the uncertainty that each hunt offers.

“What drives me is I know it is going to be different every time I go out,” he said. “There is always a first for something on each hunt and I learn something every time.”

As shoot time nears and the light begins to shine brighter in the sky, it becomes apparent that today will be a good day of hunting, as flocks can be seen flying  in the near distance. Moragne loads his twelve gauge shotgun with three shells, and closes the chamber.

“Those couple minutes [leading up to shoot time] are something similar to being on a kickoff of a football game,” he said. “Words can’t really describe it, but it feels like my heart is gonna beat out of my chest. It’s pretty cool.”

Meanwhile, he reflects on the rolling hills beyond the pond, the bay on the other side, and the lone clubhouse situated on the levee.

“I’ve learned to respect the outdoors a lot more now, since I’ve been hunting,” Moragne said. “I like to give back in different ways which allows me better opportunities for hunting success.”

Hunters do give back to the outdoors. According to the Fish and Wildlife Service, $200 million from hunting licensing fees go directly back into nature in the form of wildlife management and hunter education classes.

There is also the Federal Duck Stamp, a $25 stamp that is required for hunters to hunt all migratory birds, including waterfowl. This stamp alone has contributed to more than five million acres for the refuge system. The refuge system ensures that future birds can be present not only for hunters, but also for the good of the environment.

“People who see hunting in a negative aspect don’t understand what hunters do for the environment,” Moragne said. “I can’t speak for every hunter, but the ones I know care about the game they harvest more than anyone who says they are against hunting. Even the little task of buying a hunting license goes towards preserving habitat for wildlife.”

“Get down,” Moragne says.

A flock of ducks begins to circle the blind, lured in by the decoys and calls that Moragne has set up. They are circling the blind, getting lower with every revolution, and time seems to last forever in anticipation. Then the moment comes, the ducks are in range.

Moragne turns off the safety and flashes out of the blind.

Bang. One duck drops from the sky. Bang. Bang. Another one drops.

Moragne hops out of the blind in excitement, wades over, and with beaming pride, shows me his prize: two drake wigeon. He spreads out the wings and admires the feathering of the ducks and blue bill of the wigeon.

He shoots four more ducks before his hunt comes to a close. He is one shy of the daily limit, but still calls today the most successful hunt of the season so far.

“My limits will eventually come later in the season,” he said.

Then he carefully plucks and breasts the ducks, saving the meat to eat later on.

This is just one of the numerous trips that Moragne hunts every season. The season generally lasts from the middle of October to late January

“I hunt on average about 3 times a week between the SF bay and at Grizzly Island, sometimes more,” he said. “If I put all the time together it would probably scare me and make me aware to do more school work, buts that’s no fun.”

As Moragne has progressed through his hunting career, he has gained connections with other hunters that will be lifelong.

“When I first got into hunting it felt like my dad and I were the only ones who hunted in Palo Alto,” Moragne said. “As time went on, I was super surprised to see how many people actually went out to go hunting. It was pretty cool and showed me how much I didn’t know about hunting and the people that really enjoy it.

Will Moragne Shoots a Duck: