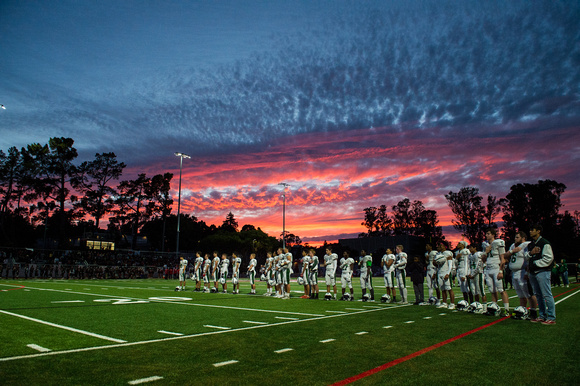 The Paly football team looks on during the national anthem prior to their win over Aragon.

Throughout Paly’s 100 years, the school’s athletes have seen triumphs and loses, championships and defeats, broken records and made lifelong memories along the way. The 2018-19 school year was no exception. With many spectacular athletes graduating last year, the fate of some teams was left up in the air. However, the class of 2019 did not disappoint, filling vacancies, old shoes, and leadership roles, and propelling many Paly teams to success.

To start with some of the years highs, let’s go back to when the air was crisper, freshmen still couldn’t find the training room, and there wasn’t a spot in the parking lot to be found Friday night. Football, a team that has had limited success in past years, came out hot. They beat McClymonds in the preseason, rolled past most of their league, and advanced to the CCS semifinals. That same season, Paly’s volleyball team clinched a place in the open division. We even had some firsts this season too! Field hockey took the field for their first season ever, and boys water polo won their first ever D1 championship. However, for all our highs, we have our lows too. It was in the fall that girls water polo unfortunately fell to Gunn on their senior night. Smoke also played a big part in this season. Football was robbed of their final home game and boys water polo missed out on states when they were cancelled. While we mourn those bottoms moments, it’s safe to say Paly came out on top of the fall sports season.

As the air chills, finals approach and Christmas decorations start to line stores shelves, we venture into the winter sports season. As a basketball player, I can safely say (with an unbiased opinion) this is the best season. Nothing quite beats the electricity that fills the Peery Center on Friday quad nights. Boys and girls basketball both had exceptional seasons, the latter even breaking a record. Girls basketball went undefeated in league and both teams made it to the CCS championship. Playing back-to-back, the girls fell in a heartbreaking loss first, but the boys came out strong winning with a score of 42-33. Both teams forged ahead, girls winning their first-ever NorCal game and boys making it all the way to NorCal quarterfinals. Perhaps the most exciting aspect of basketball season was the complete sweep of Los Gatos by all Paly basketball teams. Looking over to soccer, despite many injuries, the boys team would secure a spot in open division. Girls soccer did not have such luck, finishing 3-10-6 overall.

Senioritis is tangible in the air, quad life is booming and summer seems so close yet so far: spring season has arrived. Lacrosse, baseball, softball, swim and dive, and boys golf and tennis were kicking off. Baseball logged back to back no hitters, a sought-after accomplishment for one game alone, let alone two. On a less exciting note, boys lacrosse saw vast diminishing participation, with only five bench players – a huge downturn from the last few years. Despite that, they were able to advance to the league championship along with the girls lacrosse team. Boys triumphed over Los Gatos to clinch the De Anza league title. Swim and dive also made it to the CCS championships. Boys diving had huge success this year, becoming CCS champs. There was one low this season that was more devastating than the rest put together: the student ban on Gatos-Paly sporting events. Boys lacrosse senior night and both boys and girls lacrosse league championships were spectator-free. The Los Gatos-Paly rivalry was something integral to my athletic career. It brought about the most passionate, exciting, fan-packed games that I will never forget. Robbing students of this experience is nothing short of a crime and is not the solution to the tumultuous turn the rivalry has taken. I can only hope in the upcoming years that the ban is removed and students again experience the extra bright, extra exciting environment that Gatos games bring forth.

Reflecting on this past year, I could not be more proud to have called myself a Paly athlete. Beyond the highs and lows of every athletic year, the Paly athletic community is unwavering and I have been so lucky to be a part of it. Moving forward, I wish the best to the juniors stepping up their senior year, and all the freshman starting their journey as Paly athletes. Like this year, I have a feeling that next year will be nothing short of exceptional.