Inside the Mind of Jamir Shepard

An examination of Jamir Shepard's Paly career, as well as his goals next year and his hopes to play in college 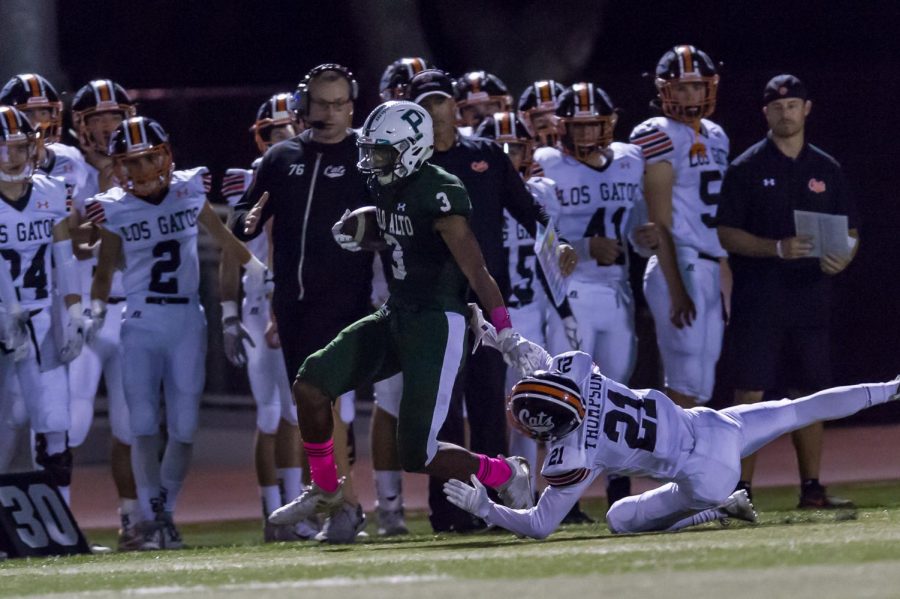 Wide Receiver Jamir Shepard (‘20) catches a screen pass at the line of scrimmage and takes off, breaking a tackle and then sprinting along sideline and dusting the Los Gatos defensive back. As the crowd cheers on, Shepard scores and is greeted by his teammates in celebration.

This 88 yard reception was one of three touchdowns scored by Jamir this game, and was part of a junior season that consisted of 48 receptions for a total of 1074 yards. Shepard, the top-ranked wide receiver in the Santa Clara Valley Athletic League (SCVAL), has started on the varsity team since being pulled up to play his freshman year.

Shepard has not always been able to dominate the field like he did his junior year. His sophomore year, he only had 21 receptions for 365 yards. However, with new coach Nelson Gifford and offseason work leading up to that season, he was able to excel.

“Practicing, catching the ball everyday and working on my footwork [helped me],” Shepard said. “Also just having the confidence on beating [my] man every single play.”

The new coach also changed the offense, turning an the old-school power run team into a pass heavy spread team. Not only did Shepard have a turn around season, so did the team as a whole. While Shepard tripled his yards that season, the team went from three wins in the 2017 season, to ten wins in the 2018 season.

However, the team still failed to win a league championship, losing to Wilcox 35 to 21. Wilcox ended up having a perfect 10 win regular season while Paly went nine and one in the regular season, coming in second.

“My biggest challenge this year was playing Wilcox,” Shepard said. “That’s probably the best rival we play. I feel I can [work] even harder next time we play so we can beat the hell out of them.”

Shepard’s next focus has been to make the team better, putting in grueling hours on and off the field, and becoming a leader.

“I have worked this [offseason] by being in the weight room lifting and getting some field work done with my Quarterback, Kevin Cullen,” Shepard said.

With his offseason work, he hopes to achieve what the 2018 team failed to do.

“What I really hope to accomplish this year is winning a CCS title and state title,” Shepard said.

Like any top tier football player, Shepard has been heavily recruited. According to 247 Sports, Shepard is a three star recruit and the 196th ranked receiver in the nation. He is frequently visited by Division I colleges and has full-ride scholarship offers from schools such as Oregon State, Arizona State and Fresno State, all schools that have sent notable players to the NFL.

“Arizona State is my top choice and I really it like there,” Shepard said. “It felt great to take my first college visit [there]. I would like Ohio State to offer, maybe USC and Colorado.”

Shepard does not just want to be able to play football at the next level, but to shine and stand out.

“I want to play at a Division I college in the next level and be that true freshman that shows out,” Shepard said.

Although college football is on the horizon for him, he still has a focus on this upcoming season, with motivation along the way to help bring results.

“All my coaches have been on me all the time about being in the weight room,” Shepard said. “Once you finally understand that, it will show on the field.”