After narrowing down to four schools, Shepard chooses to follow paths of Davante Adams and Keesean Johnson 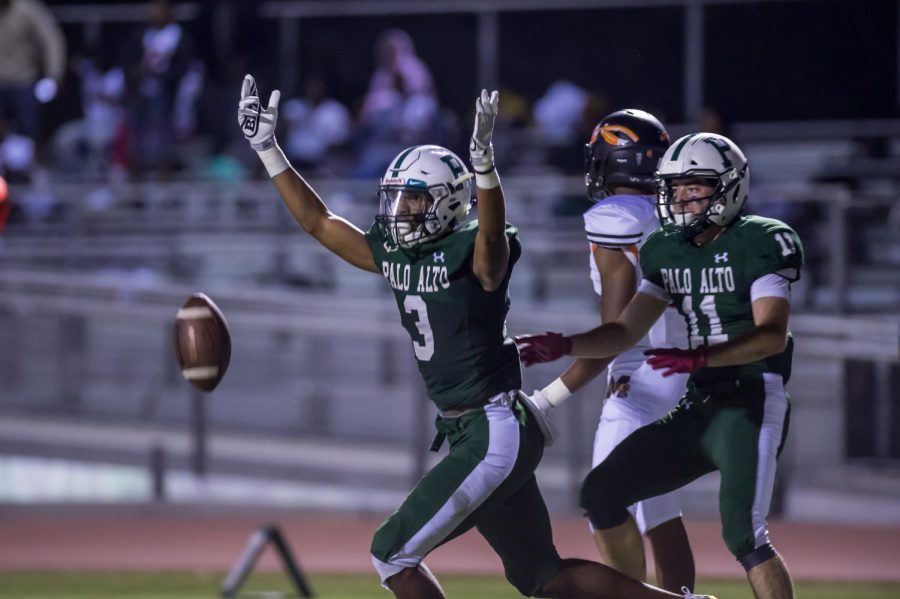 After three seasons on Varsity and an outstanding junior year, wideout Jamir Shepard (‘20) has committed to Fresno State, following the path of Paly grads Davante Adams and Keesean Johnson.

Shepard committed on a live instagram video during lunch on Friday in the football film room, while being surrounded by teammates and friends.

“I think that the commitment went well,” Shepard said. “It was a great time [to commit]. It was right before the season and I had the offers. I won’t have to think about committing to other schools.”

Shepard gained his offers after his stellar Junior season, having 1074 receiving yards and 19 receiving touchdowns. He also had one kickoff return. The team had a 10-2 season, largely attributed to Shepard’s play.

“Junior year had a big impact for [my commitment],” Shepard said. “I went from 3 touchdowns to twenty touchdowns my junior to sophomore year.”

Fresno State has become a familiar place for previous Palo Alto receivers who were top recruits. Davante Adams (‘11), the top receiver of Paly’s state team, went to Fresno State and was eventually drafted in the second round by the Green Bay Packers. He is now an elite NFL player. Similarly, Keesean Johnson (‘14) went to Fresno State and has just been drafted by the Arizona Cardinals in the 6th round.

“Keesean kind of swayed me,” Shepard said. “He wanted me to continue the pipeline.”

“At Fresno State there are not a lot of distractions,” Shepard said. “That was a big deal.”

Although Fresno State is not in a Power Five conference, in 2018, they still beat Pac 12 teams, including UCLA in the regular season and Arizona State in the Las Vegas Bowl. On top of that, they won the Mountain West Conference after their 12-2 season. Next season, they will play University of Southern California, a historically strong Pac 12 team, as well as Minnesota, a Big 10 team.

Although he has committed, this will be for when he plays in 2020. The Vikings will start their season Saturday, August 31st at Saint Ignatius High School.