Stellar performances from Ryan Purpur and Matthew Marzano, along with key contributions off the bench, help the Vikings overcome an early deficit and injuries to key players to get the win. 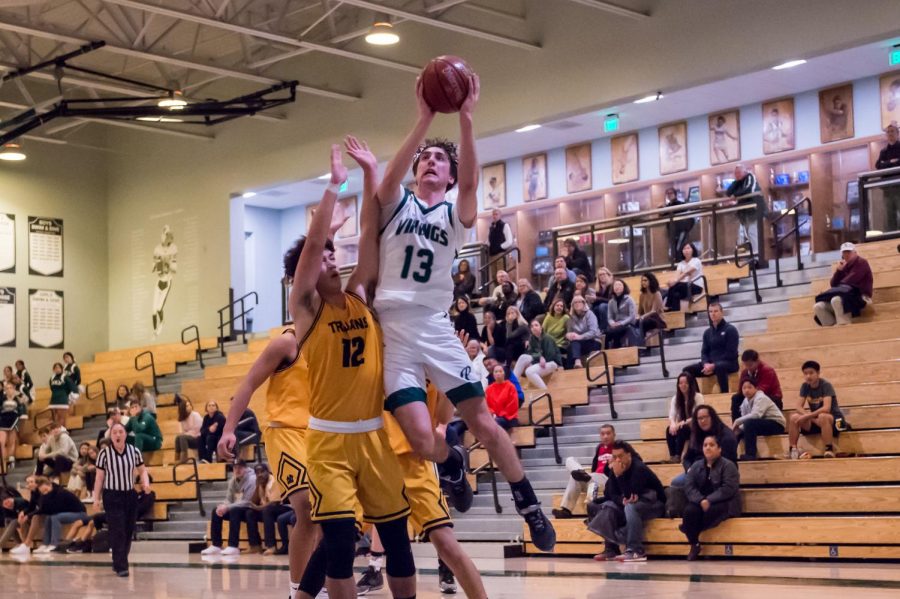 The Palo Alto Vikings men’s varsity basketball team defeated the Milpitas Trojans by a score of 59-47 on Wednesday night. Despite missing key players due to injury and illness, the Vikings were able to pull out the win behind stellar performances from Matt Marzano (20’) and Ryan Purpur (20’) as well strong play from key contributors off the bench.

The teams traded punches early in the game, and after the first quarter the score was tied at 8. However, Milpitas was able to build a first half lead after starting the second quarter on a 9-2 run.

“We gave that team a lot of confidence, and all of a sudden you saw their shots going in, their bench is clapping, they’re getting up in us, they’re causing us to take tough drives,” said Vikings head coach Jeff Lamere in regards to Milpitas’s strong start.

However, the Vikes were able to cut the lead to three points before the half and headed to the locker rooms trailing 24-21.

Paly came out strong in the second half and started the third quarter on a 6-0 run. From that point forward Paly controlled the flow of the game, took control of the momentum, and finished strong.

“At haltime we talked about we needed to play Viking basketball, which is being poised, playing good defense, not feeling their pressure, and we came out in the second half and we relaxed a little bit,” LaMere said.

Paly’s attack was led by Matthew Marzano and Ryan Purpur. Ryan Purpur led the scoring effort, finishing with 19 points on 7/10 shooting. He also added 6 rebounds and had multiple big finishes on fast breaks that helped swing the momentum of the game in the Vikes favor.

Ryan Purpur had a massive impact scoring and rebounding, and was able to take advantage of the opponent because of the extensive preparation he does before games.

“Well you know we do a lot of scouting, we always prepare a lot in practice, watch a lot of film, and know what the opponent’s gonna do during the game,” Purpur said. “So we just try to capitalize on that and play the best we can against them.”

Marzano had an excellent all-around performance, as he put up 15 points, shooting 5/11 from the field. He also added 12 rebounds and 8 assists, finishing with a double-double and coming just shy of a triple-double. His strong performance was key to the success of the team.

In addition to strong performances from Marzano and Purpur, the team received key contributions from players off the bench.

“…I think the one thing that we got from this game is…we had a lot of guys from the bench step up and really really help us,” LaMere said.

Coach LaMere specifically pointed to the performances of Simon Minami (21’)  and Elijah Steiner (20’).

LaMere was extremely happy with Maniami’s performance off the bench, as he was a strong scorer, defender, and ball handler throughout the game. Minami finished with 9 points, adding an assist and a rebound.

“You feel Elijah when he’s out there, man….because he’s getting rebounds, he’s blocking shots, he’s hustling and diving, you know he’s doing everything out there,” LaMere said. “And then, he’s scoring the basketball opportunistically”

Steiner finished the game 6 points on a perfect 3/3 from the field and added 2 rebounds.

These bench performances were key, since the Vikings were missing a few key players to injury and illness.

“Aidan didn’t play—Aidan Rausch—and normally he’s a starter. Conner Lusk is out with an arm injury he sustained in the Homestead game, and then Martin Segura has been out” said LaMere. “…one time or another, all those guys have started games, so those guys are key players for us, and hopefully we’ll get them back soon.”

Overall, LaMere was happy with the team’s performance, as they were able to get a home win in a strong team effort.

The Vikings take on Los Altos on Friday at Los Altos. Tip-off is at 7:45 p.m.