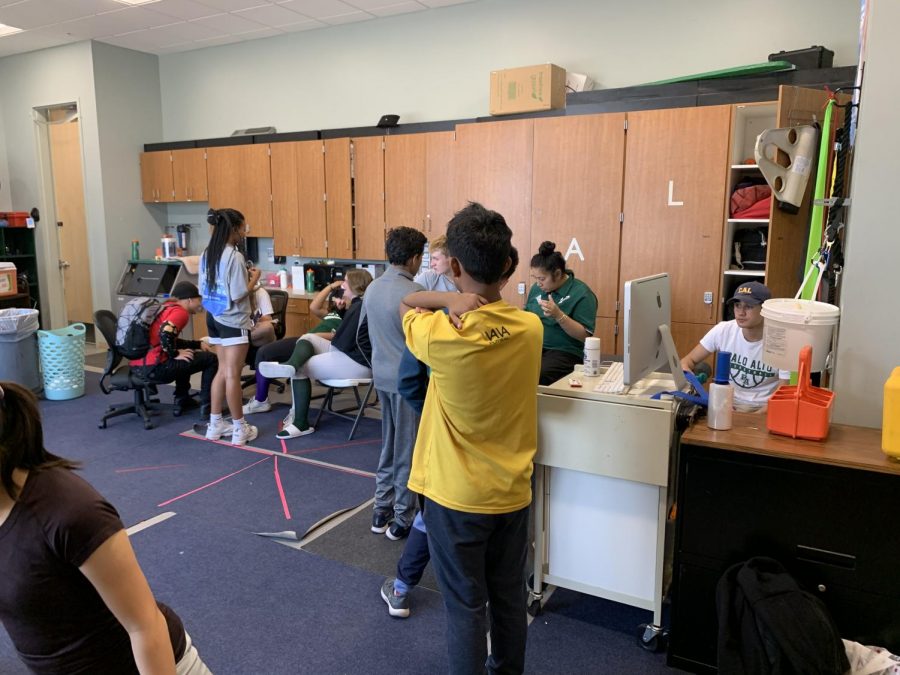 Injuries are by far the worst part of sports; for the most part they’re unavoidable, and can even be season-ending. Most athletes will need to visit the trainer for injuries at some point throughout their season. In 2017, Paly was gifted the beautiful Peery Center. In it resides a state-of-the-art training room filled with new equipment and tech. Unfortunately, this space is not being used to its full potential. As athletes file in one by one to get treatment, they are met with waiting times that can range anywhere from 10 to 30 minutes. Why? These long wait times are because only one paid trainer has been tasked with helping multiple teams all at once. The current trainer Justine Iongi, or Ms. E for short, says the overlap from winter sports currently in the playoffs and spring sports starting has caused her to be overloaded with hundreds of kids. Spring sports already have the most athletes, so when multiple winter sports are in the playoffs simultaneously, the number of kids Iongi must treat increases greatly. With the influx of kids, Iongi’s job becomes much harder.

“Unfortunately I am working a lot of hours because I do not have any help,” Iongi said.

Due to the large amounts of athletes that come to the trainer’s room for help on a daily basis, it is nearly impossible for Iongi to evaluate and treat everyone who walks through that door. During the fall Iongi had the assistance of others, but now most of her full-time assistants have been fired. It has been months since Iongi had help–she went from having two people on deck to zero.

“I could easily see 30 kids a day,” Iongi said. “I could see 20 or 30 track kids alone, and that does not include the multiple different sports.”

As athletes from various sports file in to Iongi’s room, she is forced to spend less and less time with each kid. This limited time affects the treatment that the kids receive while also forcing long wait times.

The effect this has on individual players is clear, but coaches and whole teams are also impacted by the short supply in training.

Louis Passarello (‘20) is one athlete who’s felt the strain caused by limited training – and whose entire team has suffered as a consequence. Passarello played varsity football, basketball, and track from freshman to junior year. Passarello, who suffered a grade 5 shoulder separation with torn ligaments in his final football game, has spent extensive time in the trainers’ office.

“With only one trainer, it means that there is a lot of stress on Ms. E,” Passarello said. “It is also hard to get treatment because [the trainers’ office] is extremely understaffed.”

The understaffed trainers’ room leads to long lines for treatment that at times cannot be sufficient. Now coaches are tasked with difficult decisions: either have their players miss valuable practice time to seek effective treatment, or have them not get treatment and risk further injury. This puts undue stress into the lives of coaches that could be avoided with another trainer.

It’s important that the school does something about the short supply in the trainer room. In order to get more help, the district needs to step in and hire at least two more trainers. But Anne Le, a director of human resources at the district office, says this may not be possible,

“Currently the hourly athletic trainer position is vacant,” Le said. “It is challenging though; we have had openings with both Gunn and Paly.”

While the district, along with Iongi, are searching for someone to fill the vacant spot, this search has taken months. The effects of having only one trainer have already set in and hundreds of athletes have been disadvantaged.

Iongi and the trainers’ room are in major need of help. As we wait for the district to take action, here are some things you can do to ease the strain on Iongi. First, communicate in advance with Iongi about when you want to see her so that she isn’t overloaded with unexpected kids at once. By doing this, she will be able to put together a schedule that works for her while not having to make other students wait. Second, be patient with Iongi while you’re waiting to be treated. It’s not fair to her when people act pushy and impatient when she’s working alone.

It is the responsibility of many to assist student-athletes, and the best way to support them is to hire another trainer. Additional trainers aren’t a luxury – they’re a necessity.