Problems on the Pool Deck – The Viking Magazine

Problems on the Pool Deck

At the highest levels of swimming, races are decided by milliseconds. From intense workouts to expensive and suffocatingly skin-tight tech suits, both male and female swimmers go to great lengths to squeeze that extra bit of performance out of their bodies, and athletes at Palo Alto High School are no different.

But for female swimmers like Elizabeth Fetter (‘23), these vital racing suits, which reach from just above the knee up to the shoulders, can be the source of much discomfort.

“I often do feel uncomfortable [in my tech suit] because the straps dig into my shoulders,” Fetter said.

Female athletes have developed a solution to this problem so they can focus on their races rather than on shoulder pain. Between events, they relieve the tension by peeling off the top halves of their tech suits, keeping just the bottom portion on, and opt for bikinis on top. This adaptation mirrors the more comfortable tech suits of their male counterparts, which just cover their lower bodies.

At any club swim meet, swimmers can be seen quickly changing between the comfortable two-piece for waiting between events and the more restrictive tech suit for racing. 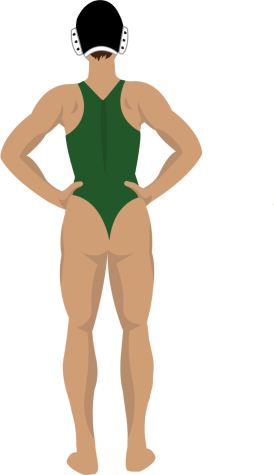 But at high school meets, the current National Federation of Swimming and Diving rules — cited by California’s Central Coast Section swimming and diving bylaws — prohibit two-piece suits for females. Furthermore, deck-changing is not allowed at swim meets, meaning that swimmers can be disqualified for changing in and out of their bikini tops on deck.

So while swimmers need to deck-change in order to stay comfortable while still complying with the one-piece swimsuit rule, deck-changing is prohibited.

In order to circumnavigate these rules, some female swimmers have taken to wearing shirts over their bikini tops. Although functional as a temporary work-around, the need for female swimmers to wear shirts on the pool deck makes athletes question the unequal treatment of male and female swimmers by the rulebook.

“I think it’s kind of a stupid rule because guys can wear their tech suits and not have to wear a t-shirt and girls can’t even wear a bikini top [or else] get disqualified,” senior Erykah Dorigatti said. “I don’t think it is being used fairly because if it was, the guys should also wear t-shirts.”

It creates an environment where I have to think about something besides simply racing … It makes me feel objectified, and like I’m not valued for the work I put in.”

Other swimmers have expressed their discontent around the sacrifice of their comfort and the disruption of their headspace on race days due to this high school guideline.

“It creates an environment where I have to think about something besides simply racing, and it can be in the back of my head,” Eden Ball (‘22) said. “It makes me feel objectified, and like I’m not valued for the work I put in.”

These rules mandating proper suit coverage and prohibiting deck changing are essential in maintaining an appropriate competition environment for high school swimmers. But as long as swimmers stay covered, which is a function that bikini tops provide, and wear the appropriate one-piece during competition, it’s not clear why a change of uniform to serve a practical need is prohibited. Especially if the change occurs in the locker room, there is no reason that an athlete’s opportunity to compete should be jeopardized by a choice to alleviate discomfort. And when the enforcement of these rules comes at the cost of athletes’ comfort, focus, and ultimately performance, it’s a disruption that must be addressed.

Swimmers aren’t the only ones dissatisfied by restrictions on their attire. Alexandra Lee (‘20), captain of the girls varsity water polo team, said she was frustrated by a confrontation about the team’s suits at a CCS quarterfinal game in 2017.

“Before the game, a CCS volunteer called the team out of the pool and called us over,” Lee said. “She then told us that when we got out of the pool, we needed to immediately put on a towel or a parka to, in her words, ‘cover our buns’, because there might be some old men in the stands who would get overly excited and have a heart attack from seeing ‘our buns.’”

Lee said that the volunteer’s offhand comment struck her as inappropriate and said, “The fact that her logic for it was to protect the old men, and not the players, really sat wrong.”

She told us that … there might be some old men in the stands who would get overly excited and have a heart attack from seeing ‘our buns.’”

The coverage and shape of a water polo suit is closely tied to its functionality. Suits that are considered full coverage tend to be very baggy and “give a lot of room for the opposing team to grab,” which is something that is problematic in water polo, according to Lee. And in a sport with this level of physicality and aggression, every inch of fabric makes a difference.

To this end, many players prefer higher-cut suits that may be more revealing, but ensure that opponents can’t get a grip and gain a positioning advantage.

“It’s natural for water polo players especially to have a little more exposure because it is more comfortable and works better with our skills,” water polo player Chesnie Cheung (‘20) said. “Having extra fabric showing leads to you being dragged around the pool, especially with such a contact sport.”

For school-issued suits, it’s nearly impossible to ensure that one suit will fit every player identically, since the same suit can fit different body types in a multitude of ways. For taller players, for example, suits that are meant to be full coverage can easily ride up unintentionally.

Cheung said that in her four years playing water polo at Paly, “Every water polo CCS or leagues [game] I’ve been to, there has been at least one precaution from a parent or official telling us to cover ourselves and pull our suits out of our butts when we got out of the pool.”

No one can dispute that the rules that exist are in place for a reason, which is to maintain an appropriate competition environment and ensure the safety of all athletes. But female players say they’re tired of being told time and time again to “cover up,” while their male counterparts compete without having to worry about anything but the game.

“If you look at the guys’ suits, that’s not completely covering their butt either and they aren’t getting in trouble the same way we are,” Lee said. “I certainly don’t think it’s fair to be holding girls and guys athletics to a different standard, especially when it comes to something like clothing that can also affect our self image and perception. When the messaging comes from as far up as CCS that they care more about the men in the stands than the protection of their athletes, I think that is a problem.”

Problems on the Pool Deck