In the sports world, we are always hearing certain players being dubbed as the "greatest of all time." What factors should be considered when debating the G.O.A.T.s of sports? 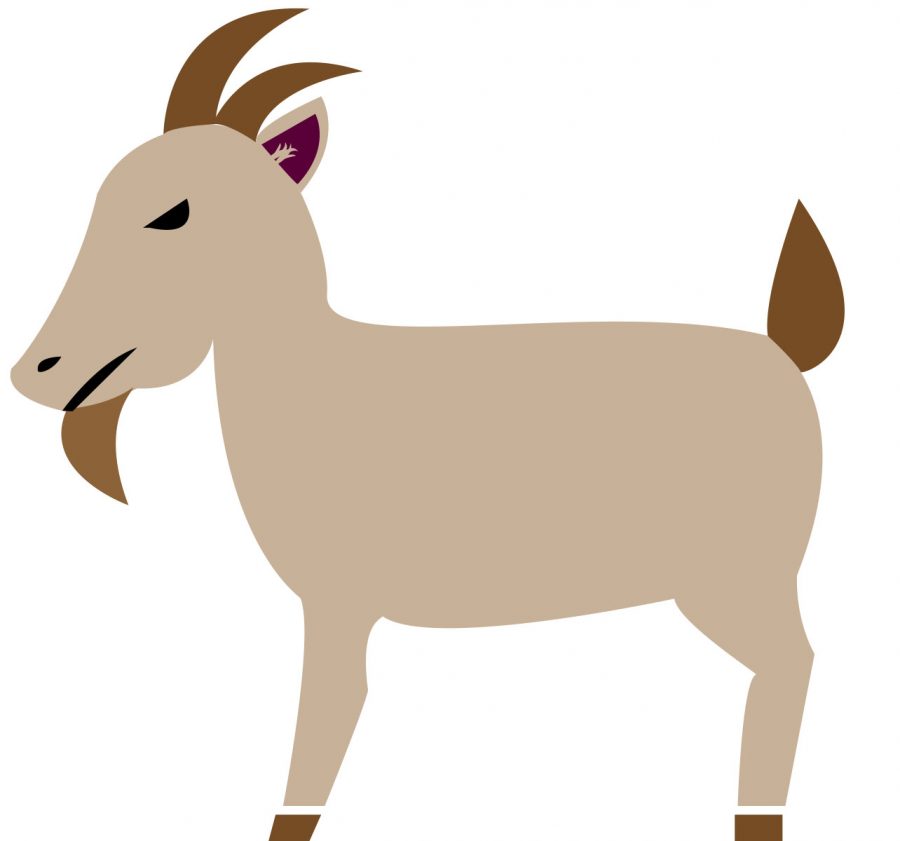 GOAT— Greatest of All Time. It is a term that we constantly hear in all aspects of society. No place is this term more widely used than in the world of sports, where fans spend days, months, or even years discussing who is the “greatest of all time.” The ongoing conversations regarding the GOATs of sports beg the question: What makes a player the GOAT? People argue that their favorite athletes are the greatest in the history of their sport, but on what grounds do they, and should they, make their claims? In response to these questions, we have compiled a list of criteria that we feel should be greatly considered when debating the GOAT: team accomplishments, individual accomplishments, impact on their sport, personal statistics, longevity of success, and their effect outside of their sport. Rarely will an athlete meet all six of these categories, but the few who do can certainly be considered as one of the greatest of all time. 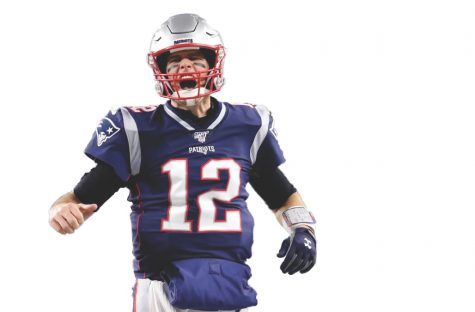 The first GOAT criteria is team accomplishments, which can range from championships to team records to unprecedented success over a single, or multiple, seasons. Perhaps no player has had the same dominance with one team as quarterback Tom Brady with the New England Patriots. After being drafted in the sixth round of the 2000 NFL draft, Brady led a 20-year career as the team’s offensive leader, proving to be a true NFL great and a beloved member of the Patriots organization.

“He was the heart of the team,” Dante Black (‘22) said. “He made fans feel like the Patriots were capable of doing anything.”

Throughout his career with the Patriots, Brady led the team to nine Super Bowl appearances and a 16-0 undefeated record in 2007. In the nine Super Bowls he played in, Brady won six, the NFL record for most Super Bowl wins by a single player.

“He held himself to pretty high standards and enforced [those standards] well,” Black said. “That combined with his skill kept the team alive.”

Brady’s skill and leadership both on and off the field were key reasons for the Patriots’ nearly two decade-long era of dominance. When analyzing the impact of a player on a team’s successes, one must understand how and why that player affected the team in the way that they did. Physical performance is only part of the equation, as character, hard work, preparation, and being a good teammate all contribute to the effect a player has on their team. All of this is to say that the greatest athletes of all time possess the necessary qualities and desire to win that in turn help their team reach success. In team sports, the success of the individual nearly always comes second to the success of the team. Look at Brady, a football titan with piles on piles of awards and winnings. Even at 43 years old in his first season with a new team, he continues to elevate the players around him, solidifying himself as one of the greatest of all time. 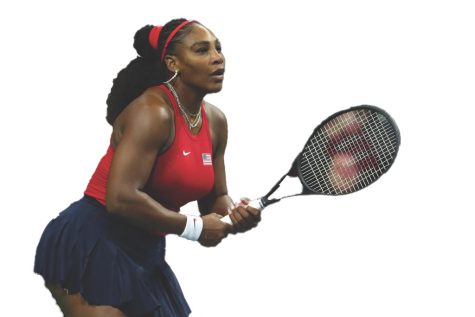 Establishing a certain player’s ability to perform extremely well compared to their peers is an important part of being considered the GOAT in a certain sport. This can be measured by the personal accomplishment. Serena Williams started playing professional tennis at the age of fourteen, and only three years later she won her first Grand Slam at the Australian Open. Ever since this first win, she has dominated the entirety of Women’s tennis, from Grand Slams, Olympics, and even winning a Grand Slam while pregnant—Williams career is rivaled by no one. She is second in Grand Slam singles and is tied for the record for the most consecutive weeks ranked number one. Williams has also won 14 Grand Slam doubles. To go along with her Grand Slam wins she also has 4 Olympic gold medals. Rachael Owens (‘21) is a varsity tennis player and one of the many that believe Williams is the GOAT of women’s tennis.

“She has basically changed the way that people view female athletes, she ushered a new era of powerful and insanely athletic female players,” Owens said.

Throughout her career, Williams redefined what it means to be a female athlete. She has broken the barrier of having male and female sports be considered two separate entities. Through her dominant career, she has made an argument to not only be the greatest female tennis player, but the greatest tennis player ever.

Impact On Their Sport

In the history of sports, many players have possessed the proper abilities to propel themselves and their teams to be considered as among the greatest. However, few players have had the extremely rare ability to change the way their game is played, followed, or viewed in society. One of these few players is Golden State Warriors guard Stephen Curry. He is not yet widely considered as an NBA GOAT, but his playstyle and approach to the game have had a profound and revolutionary impact on basketball nonetheless. Curry changed the game largely by way of the 3-pointer, a longer distance shot worth more points. Before Curry and his barrage of 3’s, the NBA was ruled by big men who dominated by scoring inside, and by mid-range killers who could knock down shots from anywhere inside the perimeter. When Curry came into the league, that all changed.

“[Curry] is very important,” said Lucus Sung (‘22) a Paly basketball player and fan. “His shooting has set the tone for NBA teams to start building around the motive of shooting more 3’s.”

The 3-point revolution that Curry brought about has changed the way that basketball is played, as teams organize around shooting more 3’s to score points more efficiently, causing defenses to drastically alter their gameplans. Curry’s influence transcends just the NBA, though, as he has influenced millions of players, young and old, around the world.

“He played a big role in who I wanted to be as a basketball player,” Sung said. “I started shooting and practicing more 3’s because of him.”

Through the explosion of the 3-pointer that he helped bring about through his incredible shooting, Curry changed the NBA, and basketball in general, forever.

Kayla Treanor has taken over the women’s lacrosse scene ever since the eighth grade, when she gained national attention for receiving an offer to play D1 lacrosse at Syracuse University. Leading The Orange as well as Team USA to win ACC titles, Final Four appearances, and gold medals in the World Cup, Treanor is arguably one of the best players in the game.

”Kayla Treanor is definitely my favorite player. Her exceptional stats reflect how dynamic she is and how she can not only take her defenders 1v1 but also have her head up to feed the open player,” Rachel Ellisen (‘22) said.

These statistics include setting the NCAA D1 record for single-season draw controls with 217 in 2016, becoming Syracuse’s all-time leading goal scorer and second in career points, being one of the most consistent leading scorers for Team USA and leading her team as well as the nation during her senior year with 90 points and a whopping 40 assists.

”I play attack for both Paly and club and Kayla Treanor’s creativity and extraordinary vision have inspired me as well,” Ellisen added. “I’m a huge fan of the women’s USA lacrosse team and I always look forward to watching Kayla Treanor break her defender’s ankles and fake out the goalie.”

Treanor’s ability to dominate on the draw circle and precisely place the ball in her teammate’s sticks as well as in the back of the goal cage makes Treanor one of the GOATs of lacrosse. 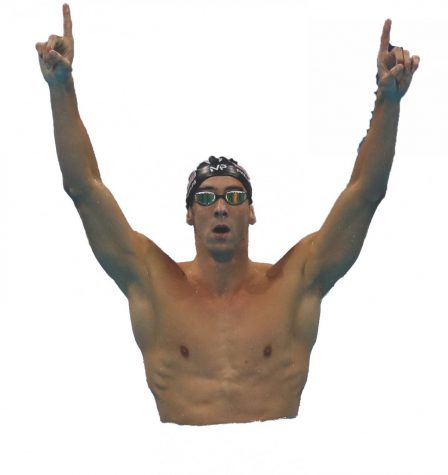 It’s no secret that Michael Phelps has dominated not only swimming but the Olympics as a whole for a while. Throughout his sixteen-year career, Phelps dominated the field, taking home twenty-three gold medals over the course of four Olympics. Through these four Olympic games, Phelps only failed to qualify for a medal once throughout the twenty-nine races that he participated in. In the 2008 Olympics, Phelps participated in eight different events. He managed to place first in all eight races, and broke the world record for each individual event except for one. This dominance lasted throughout his entire career, as he owns 28 Olympic medals,10 more than any other Olympian.

“Michael Phelps is definitely someone who won the genetic lottery, but his technique and dedication have played a huge role in getting him to where he is”, says 21’ swimmer Audrey Teo. “As a kid, I would rewatch his Olympic swims over and over again because he made swimming look so graceful”.

Phelps dominated the Summer Olympics for longer than any student here at Paly. His first Olympics, while not his most dominant, was the 2000 Sydney Olympics. His last Olympic games was the 2016 Rio Games. Competing among the best for 16 years is no easy feat, and Phelps not only competed in but dominated the Olympics. While there are some athletes who have played for longer than Phelps, in order to be considered a GOAT you must be able to dominate your sport for an extended period of time rather than just being along for the ride. This is what makes Phelps the GOAT of swimming and possibly the Olympics as well. He not only dominated the Olympics, but dominated the worldwide competition for an extremely long time.

Effect Outside of Their Sport

Muhammad Ali is probably best known for his instrumental role in the revolutionizing of the sport of boxing. However, he helped inspire millions of people as well, not only for his astounding performances in the ring, but also as a prominent activist in the Civil Rights movement.

“Not only was he a great fighter, but he was a very highly looked upon activist in the Civil Rights movement. This is why I respect him the most,” Lykken said. “He gave all those kids with different skin colors a role model to look up to and showed them that they can be great no matter the color of their skin.”

Ali was and still is an incredible role model for athletes of all racial backgrounds. Ali is not only known for being the first fighter to win the World Heavyweight Championship on three separate occasions, but also for joing the Nation of Islam, where he changed his name from Cassius Clay to Muhammad Ali. After citing his religious beliefs, Ali refused to be entered into the U.S. Army during the Vietnam War and was banned from boxing for three years at the height of his career. Ali’s heavyweight championship was also stripped from him. Despite this, Ali continued to relentlessly train and fight through the hate that he received. After being diagnosed with Parkinson’s disease in 1984, Ali helped raise millions of dollars for his treatment and research. Despite his severely impaired motor skills and speech, Ali was recognized as a United Nations Messenger of Peace and received the Presidential Medal of Freedom for his humanitarian work in developing countries before his diagnosis.