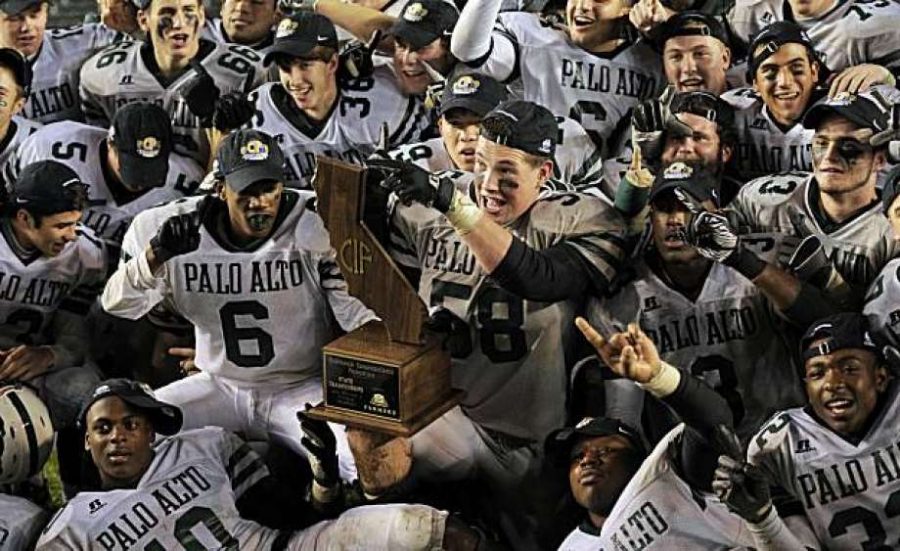 After connecting with several coaches and players from the 2010 State Championship Football team during the process of writing a story in our first issue, we discovered a video that represents the Palo Alto High School sports community perfectly.

We felt it was necessary to share this video and dig a little bit deeper into the team dynamics within the Paly sports programs. As former and current athletes, we understand the importance of connection, teamwork, and respect in sports, and strive to build strong teams at our school.

The 2010 football team is an outstanding example of a team that took their talents and used them for the greater good to bring the Vikings to a historic victory. Yet, not only was their season about winning, it was about building connections and enjoying something that all the players had in common: playing football.

As the team began to win game after game, they built a tradition that would turn into a viral YouTube video streamed on Paly InFocus. After every victory, the players would celebrate by belting the song “Teenage Dream” by Katy Perry, dancing under a disco ball in the locker room, all the while developing a strong team bond. But quite ironically, the Vikes truly accomplished a “Teenage Dream” after becoming state champions.

The song brought them so much joy, that they decided to film a music video on a bus trip as a team. The video is quite funny, although it has a deeper meaning. Our athletes are able to put aside their differences, accept others, and are not embarrassed to let loose and make memories with their teammates. Football players singing “Teenage Dream” is just too good.

We would now like to share our personal experiences as athletes to help you better understand the importance of sports in our lives.

Personal experience (Eve DeGeronimo, Senior): After playing JV basketball for two years at Paly, I have made long-lasting friendships, inside jokes, memories engraved in my mind, and I’ve grown as a person. Sports at school has given me the opportunity to meet new people, try something new without judgment, and work hard to be better. I’ve witnessed my teammates’ amazing journeys, starting with no basketball experience whatsoever, to hitting a game-winning three-pointer. Not only did I grow as a leader, but I grew as a person because I helped the people around me while still improving my own basketball skills. Both of the years I played, my team grew comfortable around each other within days. We all showed each other kindness and respect throughout the season and I was lucky enough to meet and play with all the people that I did. Although there have been lows in everyone’s sports seasons, without Paly sports, many athletes would not be the people they are today.

Personal experience (Zach Hayward, Junior): Having been a member of the baseball program at Paly these past few years, I have witnessed first hand how players of different ages and skill levels can bond together and help each other reach their goals. Despite there being a JV and a Varsity team, an interconnectedness within the program as a whole sees everyone striving for the same things. Time and time again I have witnessed seniors helping out new freshmen, juniors giving tips to sophomores, and sometimes the other way around as well. The Paly baseball coaches have worked hard to develop strong chemistry and morale within their program, as regardless of the team they start on, many players are given the opportunity to move their way up and play with new people throughout the course of their career. This chemistry can be seen across the board, from supporting each other during hard practices to having fun on team bus trips, to spending time with teammates through team meals and get-togethers. The creation of strong bonds that are fostered through these experiences is crucial to on-field performance, as the teams with stronger relationships tend to perform significantly better than those who lack them. Baseball is an extremely difficult sport filled with countless opportunities to fail, but team chemistry and positive bonds between players and coaches allow for one to overcome obstacles and do their part for the good of their team. Playing baseball at Paly has given me great insight into what it means to be a good teammate and what it takes to be a hardworking player, and I have learned lessons that will surely last a lifetime.

Personal Experience (Jake Foster, Junior): An experience of mine similar to that of the 2010 State Champs would certainly be during my time in the Palo Alto Babe Ruth League. I played on the same team for all three of my years and every year our season was very successful. Throughout my first year on the team as one of the youngest players, I along with my fellow 13-year-olds always looked up towards the older players on the teams, the 15-year-olds. These were the team captains and it was our job as the rookies on the team to learn the ropes of these players and adopt their traditions for when we become the team captains someday. One tradition of ours that stuck throughout the three years I was on the team was slightly unconventional to common baseball standards. Most other teams take warm-up time very seriously, this is the time players usually get in the game time mindset, where players prepare their bodies mentally and physically for the big game ahead. However, my team took this time a little less seriously. We found that we played the game at our best when we were simply having a good time, which is why we decided to goof off a little every time we stretched together as a team. It was in these few minutes before every game that brought everyone on the team closer together and led us on to win two championships two years in a row.