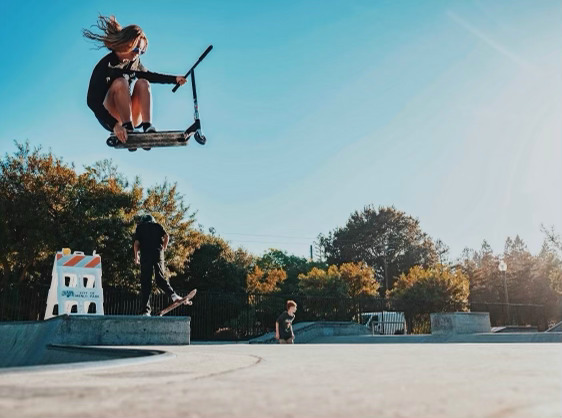 On a typical Saturday afternoon, kids pile into the skate park on the outskirts of Greer Park in Palo Alto. Young men and women in baggy cargo pants, jeans and graphic t-shirts whiz by on wheels, dropping confidently into the bowl. Gliding around the park’s smooth and graffiti concrete, they execute elaborate tricks with ease and certainty. Despite the differences that may separate them outside the park, they come together for hours at a time for their shared love of skating.

It has long been known that the attention of mainstream sports is dominated by the popularity of basketball and football. As a result, several other sports are left out of the spotlight, operating in a niche corner of athletic competition.  Though these sports often remain out of the public eye, the technical skill required to excel in them undeniably matches up with that of football and basketball. One such sport is skateboarding, and it’s beginning to break out of its niche and into the mainstream. Not just through national and Olympic competition, but through modern pop culture as well. It can be as extremely casual or as fiercely competitive as it wants.  The negative stereotypes attached to it are beginning to fade away, and millions of people are gleefully participating and watching it.

Since its inception in the 1950s, skateboarding has evolved significantly in the last seventy years.  Until 1959, early en 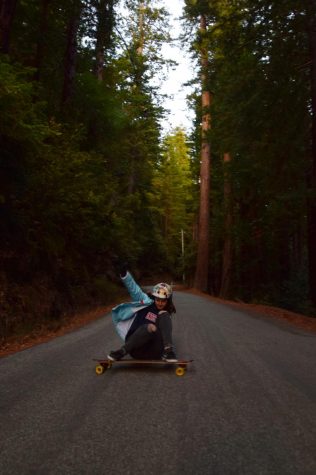 thusiasts of the sport were forced to make their own skateboards due to the lack of commercial products. Though this might be seen as a step back, it spurred the creativity and freedom that exists at the core of skateboarding. Some made their skateboards with homemade crates of wood with roller derby skates attached at the bottom, while others opted to use wooden pallets with clay wheels.

There were no boundaries and no limits to what one could do with their board. This carefree attitude, integral to the identity of skating, has continued on to this day most notably in the tricks that only talented skateboarders can pull off.

Skateboarders have even adopted their own language over time to describe the various tricks and moves one can perform. Words like kick flip, heel flip, front side 180, and power sliding may not come as common knowledge to most, but are considered second nature to the kids at the local skate park. One of the most commonly known tricks is referred to as the “Ollie”.  From the outside looking in, it looks exceedingly simple. You push down on the back end of the board and use your other foot to slide up on the board, causing you to hop into the air for a brief moment and land to the sound of a satisfying pop. But once you step onto the board and feel the grip tape securing your feet, the simple trick becomes a lot more daunting. You need coordination, timing, and finesse to pull it off smoothly.

Anyone can push the board and ride it down their driveway, but the skill ceiling of skating requires another level of dedication and practice that rivals that of the most intensive sports. However, despite the high level of skill and creativity present within skating, there remains push back from the mainstream audience. For the longest time, skateboarders were looked at as nothing more than groups of lazy, uneducated, punk kids, who had the wrong priorities in life. Paly senior and avid skateboarder Sam Mutz, describes his view and experience of these stereotypes.

“There definitely is a stereotype about skateboarders that can be easily broken, but it definitely exists because of people that aren’t very familiar with the culture,” Mutz said.

And while negative stereotypes about skateboarding still exist today, people have begun to appreciate and change their preconceived notions of skateboarding. Skateboarding icons like Tony Hawk have helped progress skateboarding and move past old stereotypes. Fast forward to present day, and skating has seen unprecedented levels of mainstream media attention with more and more people being exposed to the raw beauty of skating.

“Skateboarding as a whole could be described as an art, but there are art forms within every aspect of skateboarding,” Mutz said.

Katherine Thomsen (’22)  also finds the beauty in skateboarding and is intrigued by different styles of skating.

“I definitely see skating as an art form, everybody skater has a different style, that’s what I love about it,” Thomsen said.

“It’s a custom fit to who you are and what kind of skater you want to be. What you wear is a reflection of your personality and even how you skateboard,” Mutz said. 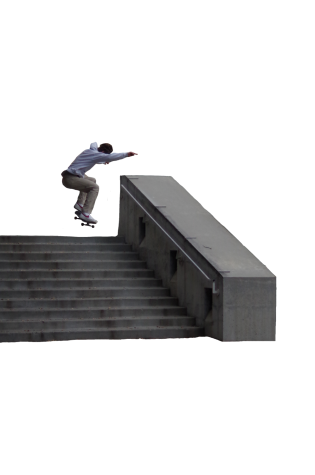 Similar to Mutz, sophomore Delaney Ball has taken up an adjacent sport, scootering, and was intrigued by the different aspects of this unique sport. Ball started scootering when she was around 13 years old and first started off learning tricks from youtube. In her experience, scooter culture and skate culture have similarities.

“Skating and scootering has influenced fashion, music, and even how we talk. There are no rules in skating or scootering so we can be as creative as we want and do basically whatever we want,” Ball said.

Ball influences her style around skate culture and finds creativity in all aspects of skate and scooter culture. Since there aren’t any rules or any ways that skateboarders have to specifically do something, the world is their playground. Skateboarders can now create videos to post online that showcase their creativity.

“Scootering is a work of art because there are no rules. You have to be creative and do things that other people would never think about,” Ball said.

Junior Owen Rice, an avid skateboarder like Mutz, shares similar ideas about the creativity of skating.

“Skateboarding is so many things, so many people, and so complex that it is very hard to define,” Rice said.  “Most importantly to many including myself, it’s an escape, it makes us all happy, and has the power to distract us from whatever we have going on.”

While the clothing and board choice of skaters might seem as obvious forms of artistic expression, many skaters will tell you that because of how much time and effort skateboarders put into their craft, the biggest artistic expressions are the things that you don’t see at first glance. In skateboarding, while the tricks that do the most flips and spins seem the coolest, the ones that are done with the best style are the ones that amaze skateboarders around the world.

“Specifically your style, is something that you control,” Mutz said. “It’s very specific and if you watch skateboarding for a long time, you can really notice differences in people’s style and that becomes what people notice. Not necessarily disregarding what tricks you are doing, but on top of that, how you are doing them and the creativity within them.”

can’t seem to get enough of, and is why he, alongside other skaters, continue to work on their craft every single day.

“There are just so many ways to express who you are and that really is what art is to me,” Mutz said.

Skateboarders of this generation are constantly redefining the narrative that has been surrounding them ever since it became popular decades ago. What used to evoke a negative stereotype is changing profusely as more and more young kids are becoming interested in skating as a creative outlet. The recent upsurge is being recognized by the public eye and is undoubtedly resulting in a positive response that has never been seen before. Skating is not easy and requires practice as any pro-sport does. Encouraging kids to hop on a skateboard is just as beneficial to their mental and physical state as picking up a basketball or jumping in the pool. As the pandemic continues and sports are kept under strict regulations, skating can be a perfect way to stay safe and enjoy the outdoors. Don’t get discouraged if you can’t “Ollie” on your first day, practice makes perfect and success lies between you and your board.