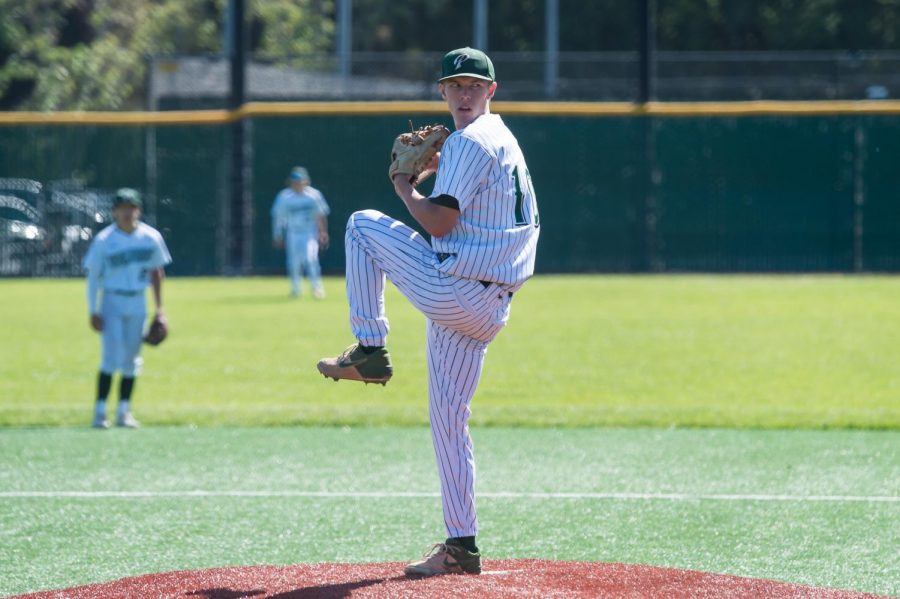 You can often find Ritter Amsbaugh (‘21) in the trainer’s office emptying or filling huge jugs of gatorade and water for his baseball teammates. A job you mostly see underclassmen doing, Amsbaugh has been the honorary “waterboy” for his team since his sophomore year and has voluntarily continued to be the “waterboy” even as a senior.

Amsbaugh has been a varsity starter for the Viking’s since his sophomore year, playing third base and pitching. Pete Fukuhara is Paly’s varsity head coach and has coached Amsbaugh since he got pulled up to varsity at the end of his freshman year.

Along with his ability to perform well at his sport, Amsbaugh’s teammates appreciate how encouraging and kind Amsbaugh is. Zander Darby (‘21) has played baseball with Amsbaugh since they were ten years old. They played together throughout the Little League, travel ball, and now high school baseball. Darby notes his sportsmanship skills even in tough situations.

“He’s a very gracious winner and loser. And he has a lot of respect for whatever we’re playing. When things go bad, he stays composed,” Darby said. “He’s still going to pick someone up and talk to someone to try to make them feel better and he’s one of the best teammates you can have.”

Amsbaugh acts as a leader for the team and has a great character fit to support the team dynamic of baseball. This can be shown in action, when the team played Los Gatos for the first time this year. The team lost badly and left the Viking’s discouraged when they came to practice the next day. Even with the tough loss, Amsbaugh was able to support his teammates.

“He brought the team together, and he said some stuff that kind of just lifted us up in a way, which was a very good moment,” Darby said.

Amsbaugh has the ability to motivate his teammates and keep a positive attitude in times of difficulty. His coach, Fukuhara, sees something special in Amsbaugh as more than just an athlete.

“If I could nominate one of my players for the last eight years to get the sportsman award, it would be Ritter. He’s overqualified for this award. He’s got some of the best character on the team,” Fukuhara said.

A Bit of Darby’s Interview for Amsbaugh

Leo Malchin (‘21) is a member of Paly’s boys soccer team and has left his mark on Paly athletics.

During practices, Malchin cheers up his teammates when they do something well and gives them constructive criticism when they have something they should work on. This past season did not go well for the team, with multiple losses and only one win. However, even through the unsuccess, the team continued to play with the same strategy and worked hard.

“I think that also helped us remain a tightly-knit and fun group throughout the season, which isn’t always trivial given the results we got,” Malchin said.

From leading Paly girls lacrosse as a captain to dominating as Paly’s starting water polo goalie, Andie Tetzlaff (‘21) has left her mark on Paly athletics, but most importantly, on her teammates.

Tetzlaff has been playing sports since she was around four, but just recently picked up water polo her freshman year of high school. In water polo, the defensive side of the game mainly revolves around the goalie and her ability to communicate with her teammates. Tetzlaff filled that role well and became the Viking’s starting varsity goalie during her junior year of high school.

Tetzlaff is known for encouraging her teammates and being positive even in difficult situations during games. Grace Lindstrom (‘21) has been playing water polo with Tetzlaff since 2017 and appreciates her commitment to being a role model on the team.

“Whether we win or lose, she is supporting her teammates and respecting girls in the pool,” Lindstrom said.

Similar her beginnings in the pool, Tetzlaff only began playing lacrosse during eighth grade. After being one of four girls to make the varsity team as a freshman, Tetzlaff was pressured to compete at a higher level than what she was used to. She is now a co-captain of the girls lacrosse team.

Tetzlaff’s leadership has helped her team over the years, notably qualifying for the S.C.V.A.L. league finals in 2019. The team fell to Los Gatos in a heartbreaker, but redeemed themselves this season, defeating the Cats recently.

Tetzlaff’s enthusiasm during practices and games has contributed to her own individual and team  success. Lulu Gaither (‘21) plays lacrosse and water polo with Tetzlaff and they have grown close over the past four years.

“Whenever I need her, she’s always there to hype me up or get me excited to play,” Gaither said.

“This year in particular, Andie has really stepped up for us. Playing two sports at once is crazy, but she’s making it work for us,” Lindstrom said.

Although playing two sports at once can take a toll on an athlete’s enthusiasm and attitude, Tetzlaff is able to balance her time and is always supportive of her teammates.

“Andie never comes out of a game upset or frustrated with her teammates and is always one of the most optimistic people in the pool or on the field,” Gaither said.

Noelle Burwell (‘21) has been a member of two sports teams at Paly, tennis and softball. Although Burwell has been playing sports for many years, the social aspect of Paly sports was an experience that Burwell enjoyed.

Myra Xu (‘21) plays tennis with Burwell for the Vikings and got to know her through being her doubles partner.

“There was a time when we finished our match a bit early, and a teammate who plays exhibition needed a doubles partner. Noelle and I were both so tired, but she stepped up and decided to play a whole other match so our teammate could play, which was really nice of her,” Xu said.