Male Upperclassman Athlete of the Year 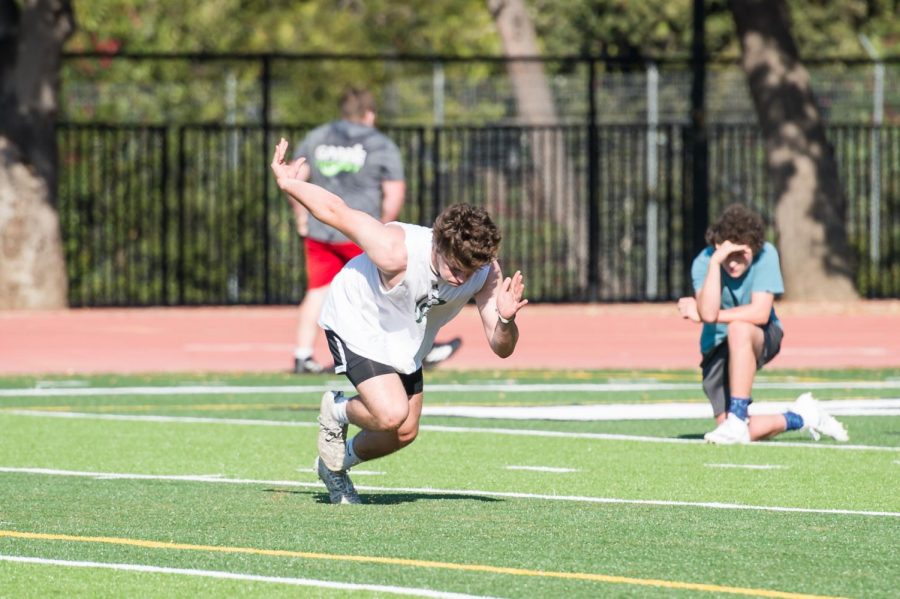 In a year marred by the coronavirus and lots of uncertainty over restrictions and guidelines, it was unclear if there was even going to be a 2021 football season. But as vaccines were developed and case rates slowly went down, the SCVAL approved a shortened, five game season for football. For junior running back Josh Butler, this opportunity meant everything.

Butler is being recognized as Viking’s upperclassmen male athlete of the year for his impact on the football field and the value he brings to the team. The viking offense revolved around Butler, who finished with 11 touchdowns and over 750 yards in only five games. This translates to more than 2 touchdowns and 150 yards per game, a remarkable stat line.

“What makes Josh so dominant is the way he takes sports so serious in and off the field,” junior quarterback Danny Peters said. “That kid is the hardest worker I’ve ever seen and he never turns down the chance to help out another teammate. That mindset goes into the game as confidence and makes him the dominant RB we need.”

Despite being the driving force of the Viking offense, Butler also takes pride in his teammates’ achievements. This selflessness is part of why Butler is such a valuable part of the team.

“After seeing all my senior friends the last game, it really teaches you to appreciate all that this game is,” Butler said. “Every game played is one less to be played, so you really learn to appreciate all of the moments of the season. Getting hyped with my teammates for the first time that year was something I’ll cherish forever.”

Butler’s achievements can be traced to the 2019 football season, where he had a breakout year as a sophomore. After emerging as a star, Butler felt inspired to take his game to the next level. Over quarantine Butler bulked up in an effort to make himself a bigger threat on the field.

“Between the 2019 season and the one that ended a couple months ago I tried to add on as much mass as I could,” Butler said. “It was an effort that began after football ended last fall and lasted an entire year. I went from around 160 pounds to 195 pounds in preparation for the season.”

This added mass allowed Butler to plow through defenders, and combined with his speed and agility, Butler became a force on the football field. But despite Butler’s remarkable season, the Vikings as a team were not as dominant as in past years, finishing with two wins and three losses. This included a 45-7 defeat at the hands of league rival Los Gatos in their final game of the season. Although the season wasn’t perfect for Paly, Butler was just happy to be outside playing football again with his teammates.

“The best part about being able to play football this year was finally getting a break from doing nothing all day,” Butler said. “Throughout quarantine we have all been so bored – football was a great escape from all the craziness of the last year.”

Butler will return next year in his senior campaign to build on his success from this year, hopefully in a regular season unaffected by COVID.

“We were a super young team this year, ” Butler said. “I am excited to see what we can do when we are all seniors next year.”

It was extremely hard to narrow down all the incredible athletes that performed at such high levels during a challenging, shortened season. An athlete that very well could have won this award is senior Aaron Kim, a standout athlete on Paly’s Track and Field Team.

Kim is one of the best high jumpers in the state. He proved that this season with incredible performances at meets, where he shined among a crowd of other incredible athletes. Undoubtedly, his best performance came in a meet in mid May, where he would jump 6’7”, which is his personal best, and ranks third in the state. Kim knew from the beginning that he would not take his senior season for granted.

“Knowing that there was uncertainty with the season meant I couldn’t waste my time,” Kim said. “Seeing how far I’ve come despite those challenges has been extremely rewarding.”

The hard work that Kim put in at a time when nobody really knew if there was even going to be a season separated him from the rest of the field. He is the real life example of how hard work really does pay off.