“Hidden Gems” are outstanding athletes that don’t necessarily receive the recognition they deserve in comparison to better known sports. 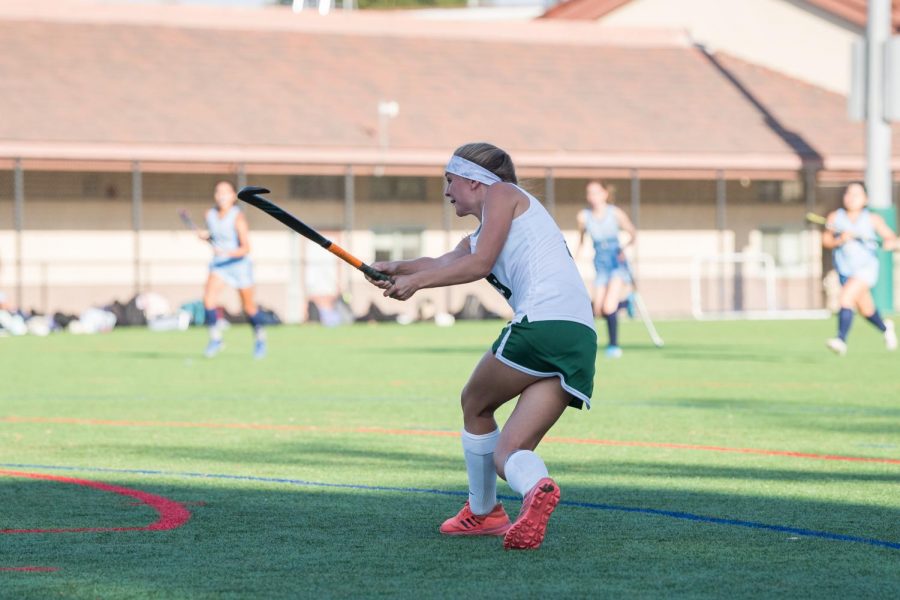 Pushing the ball downfield, with her eyes locked into the goal, she fires. The ball hits the back of the field hockey net, junior captain Kellyn Scheel celebrates with her teammates as she runs back towards midfield. Scheel’s goal is met with enthusiasm from a handful of parents and students, but not nearly reaching the level of excitement that the goal seemed to merit.

This raises the question: are star athletes in smaller sports gaining the recognition that they deserve?

It is often easy to overlook the effort that these talented athletes put into their sport because they are not in the spotlight. However, athletes in these niche sports need to be recognized.

Field hockey is a relatively new sport at Paly, debuting in the fall of 2018. Despite its many successes in a short time period, the novelty of the sport may be one reason why it is not getting its deserved attention in the Paly community. As a result, even the brightest stars, like Scheel, aren’t nearly as well known as their counterparts in more popular sports like football and basketball. Viking Magazine hopes to change this narrative by profiling some of Paly’s best athletes in lesser known sports.

During the 2021 season, Scheel scored an impressive 11 goals in the shortened season, tied for the team lead. Her success is unsurprising given that Scheel is not new to field hockey, unlike the vast majority of her teammates.

“Both of my dad’s sisters played field hockey at UC Berkeley,” Scheel said. “I got to know the game really well, and was inspired to keep playing, no matter if others were or not.”

Scheel grew up playing numerous sports, including more popular ones like soccer and basketball, but her passion has always been rooted in field hockey. Some of her earliest memories of sports come from playing field hockey in the backyard with her aunts and cousins. When she got word that Paly was starting a field hockey team, she was ecstatic.

“Something clicked in a way it hadn’t with other sports,” Scheel said.

With the Viking’s successes, including an undefeated season, Scheel noticed an increase in attention surrounding the team among several publications. However, the praise has not come from the broader Paly student community.

“We need more support all around just because it makes everyone excited to play knowing you have a community backing you,” Scheel said.

Scheel is hopeful that the sport will continue to grow and become a big part of the Paly sports world. She continues to motivate herself through her pure love of the game, though she is optimistic that the future of Paly field hockey will be backed by more support from student fans.

“My motivation all comes from wanting to get the sport out there so that eventually it will get the attention it deserves from the Paly community,” Scheel said.

Max Felter, a Paly senior wrestler, has had lots of experience with overcoming adversity, despite the smaller recognition he receives.

“It’s just something I like to spend my time on,” Felter said.

Wrestling: a physical sport between two athletes, using strength and grappling techniques. The sport takes an excruciating amount of hard work and dedication to master.

Wrestlers must stay focused throughout their season and push through many difficulties, including weight cuts, hard drilling, and dealing with injuries. Regardless of your natural ability, it is intense practice and commitment that separates the “good” from the “great” in this sport.

Felter trains for hours each practice going through warm-ups, hard drilling, and then goes 100% against one other player to finish the practice off. But when taken into the game, it is only in the brightest moments that there is a little more than a smattering of applause to greet his achievements.

“I’ve been fortunate enough to have very supportive teammates and real partners,” Felter said. “My teammates and coaches are the primary source of my motivation.”

Wrestling also teaches its athletes important life lessons, such as setting goals, and putting in the work to achieve them. Goals help to keep athletes focused on a single task in their never-ending search for success.

Wrestling at Paly may not draw thousands of fans, but that is not what drives Felter. Felter puts aside the lack of support wrestling receives compared to other sports such as football and basketball and lets his determination drive him towards success.

“I can’t act like wrestling deserves the limelight,” Felter said. “We get a good amount of support from the school, and parents especially, so I would say wrestling is just where it needs to be.”

It could also just be a misunderstanding and lack of knowledge for the sport resulting in underwhelming support.

“I think it’s just culture and location, wrestling isn’t a big deal to most people here,” Felter said. “It’s complicated and takes a lot of effort to learn how to understand what’s going on in a match.”

Junior Hillary Studdert, a Paly track athlete, trains almost every day to achieve her goals of getting the attention they deserve from the Paly community.

Track and Field, unlike traditional team sports, requires athletes to compete against oneself and other athletes. It is a sport that demands sheer determination and grit in order to pass the finish line ahead of your opponents.

Studdert knows this grind all too well and knows how her hard work would eventually pay off.

“When I was younger and we would do running activities in PE, I noticed I was pretty fast compared to the other kids in my class,” Studdert said.

Despite her dominance, Studdert has noticed that track and field doesn’t quite get the same recognition as some other high-profile sports.

“The issue is certainly not talent and success,” Studdert said. “Myself and others have been or are ranked high in the state in our respective events and produce great results in championship races.”

Studdert rarely hears anything about the team’s successes whether it’s her peers or over announcements at school.

“It would be nice to get more recognition around the Paly community and publications,” Studdert said. “It can be really frustrating to see the lack of equality between football and a sport like track.”

Although Studdert feels like her sport doesn’t get the attention it deserves, she still finds a way to motivate herself and her teammates to continue and get better.

“My teammates are always pushing me to be my best during hard workouts and I try to think about how the work I put in will positively affect the outcome of my upcoming races.”

Paly sophomore tennis player Mihir Menon, wakes up almost every day and gets ready for both school and tennis practice afterward.

Just as important as the physical aspect of the sport, the mental aspect of tennis plays a key role in victory and handling adversity alike.

“I fell in love with the competitive aspect,” Menon said. “In tennis, it is just you and your opponent; there are no coaches on the court. It’s just as much mental as it is physical, that is what has kept me playing.” Menon’s past with tennis have created great opportunities for him on and off the court.

“I have learned a lot of life lessons and how to deal with different situations,” Menon said. “More than actually my tennis skills, I cherish the different experiences that I have gone through.” Tennis is a sport that tends to be neglected at times, not receiving as much attention as some other larger sports at Paly.

“I feel like tennis is not respected for how physically difficult it really is,” Menon said. “Matches can last up to 3 hours and the weather is extremely warm during the tennis season.”

With the hard work that Menon and his teammates put into tennis, the recognition that they deserve should surge.

Menon hopes that tennis will soon receive the recognition that the sport deserves at Paly.