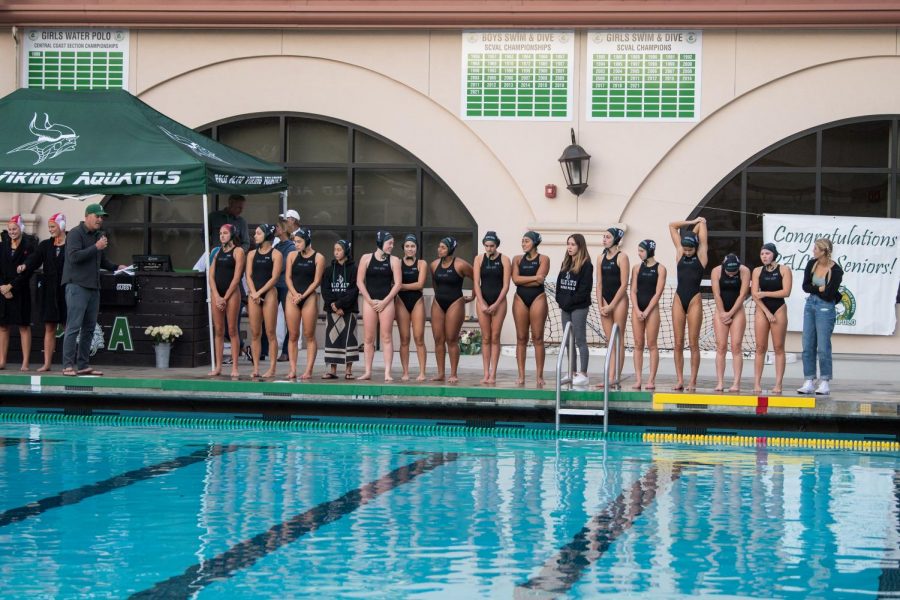 Paly Girls varsity water polo had a season full of ups and downs. After graduating many of their starting players last year, the team consisted of mostly younger athletes, providing a unique challenge to the team mentality and tenacity. With only one player who had started the year prior, it was unknown the amount of success the team would have.

“I went into it thinking not much due to the fact that we are so young, but we all came together and made something out of what we had,” Senior Julia Ragno said.

Despite the team being made of younger players, everyone worked hard to keep an upbeat attitude and work together. This was key to the girls success both in and out of league games.

“The biggest thing we learned was how to adapt to the large variety of levels of experience and to work as a group to utilize all of our different strengths,” Sophomore Anne Threlkheld said.

The offense was composed of mostly returners: Ragno, Paige Henry (‘23), Yasmin Friedrichowitz (‘23), and Sami Lee (‘23). Their starting goalie was a sophomore, Mary Henderson, who had an excellent season full of strong defensive showings.

Even though the team lost 7-6 to Valley Christian in the first round of CCS in a nail biting finish, they were able to benefit from the experience.

“It was a hard loss, considering we had beat them before.” Henry said. “It was frustrating, but it was great to see the team work together and push through to keep it a close game.”

The team finished their season with an 11-13 overall record but in spite of these numbers, the girls have definitely taken away positive moments and small successes. With such a young team consisting mostly of juniors and sophomores, the team looks forward to continue to improve both individually and as a whole.

“Finally beating Mitty the third time we played them showed how much we grew as a team,” Threlkheld said.

In addition to this growth in terms of team cohesiveness, Ragno notes that positive team energy also contributed to victories throughout the season.

“I’m most proud that we beat Los Altos,” Ragno said. “I remember going into that game wanting to win, and I think everyone else brought the energy as well.”

There was so much growth shown by the entire team through countless hours of effort from every single player and coach. The girls absolutely demolished the expectations for this season after losing 6 of 7 starters the year prior, and ended up with a strong impact in the league placing fifth of eight.

Stats show more than 75% of total minutes played were by players who can still play next year and 2/3 of goals were scored by non-seniors.

The girls on the team were happy with their performance but wish they could have had more time to develop the team as a whole. Overall, they are excited for the potential of the team next year. With a young and talented team, as well as strong players coming up from JV, girls varsity water polo will have the potential to be a strong contender in SCVAL and CCS competition.

“We all came together and made something out of what we had…I wish we could have had a longer season but overall, it was really fun,” Ragno said.