While most of the focus is on talent and physical ability, team chemistry is the aspect of sports that never seems to get enough recognition for its influence.

Sports, though they often seem so simple, are extremely complex. If they were as easy as, “have a good team with good players and you’ll win a championship,” then the Kansas City Chiefs would win the Super Bowl every year, the United States Women’s National Team would never lose a game, and pretty much every Golden State Warriors team in the past five years should have swept every series in the playoffs. In reality, it is obvious that sports run deeper than talent — and team chemistry might just be the most unheralded component of the equation.

When a star player joins an already established and successful team, such as when Russell Westbrook joined the Los Angeles Lakers this last summer, teaming up with All-Stars LeBron James and Anthony Davis to form a “Big 3”, there is always the expectation that the team will win a championship. But what many don’t take into consideration is everything apart from the playing itself that the team has to deal with. At the end of the day, professional athletes are people. They have conflicts, fights, and egos, so in many cases, pure talent simply isn’t enough to win.

The 2021-22 Lakers are a perfect example of a team with all talent and no team chemistry. Despite having two MVP’s and another top five player in the entire league, the Lakers are set to miss the playoffs, a situation nobody saw them in before the season started. At first, many people thought it was a performance slump, but upon closer inspection, it is apparent that what is lacking in the Los Angeles locker room is team chemistry. With reports from the NBA’s most trustworthy insiders, the players speak badly about each other behind their backs, and have constant and significant altercations in the locker room. It is fairly normal for teams to have issues in the locker room behind closed doors, but what is especially extraordinary about this Lakers team is that they project this lack of chemistry to anybody watching their games. When an incredible play happens, nobody is excited for their teammates, and there is little to no interaction between the players at all, almost as if they don’t want to be there.

But team chemistry doesn’t have to be the downfall of sports teams. In fact, it can be the exact opposite. An example of a team that takes pride in the connection and bonds between the players is not in the WNBA, MLB, professional soccer, or any professional sports team for a matter of fact. To find an example of a team that shows what it means to have amazing chemistry, look no further than the Paly Baseball team.

“Our team feels like a big family,” senior Dominic Defeo said. “We’re all friends outside of baseball so it’s a lot of fun getting to spend time with some of my best friends on the field.”

Despite having an incredible amount of talent on the baseball team, what really stands out about them is the bond between all of the players. In the halls, at lunch, and even in the classroom, it doesn’t take much time at Paly to understand that the baseball players just love being around each other. It has inevitably led to the success of the team in recent years and the development of many of the players. According to Defeo, it comes down to the feeling of belonging for the players.

“Having the type of bond that our team has allows us to really trust each other,” Defeo said. “We can always count on someone to pick us up.” 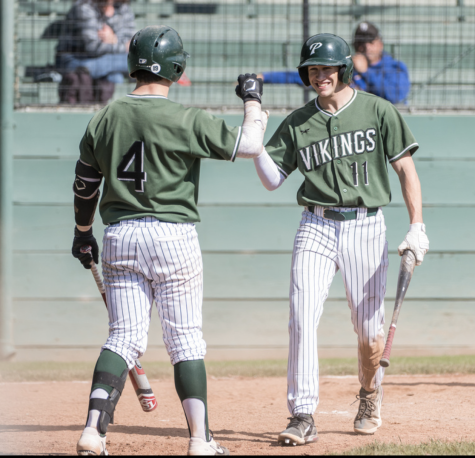 Over the years, we as sports fans have learned how valuable and special that quality is to have in a team. Players have bad games; that is normal. But when they have their teammates to offer them support when they’re down only makes the bounce-back that much quicker and significant.

It is anything but easy to develop this type of team chemistry. Doing so requires a lot of commitment to the cause and time invested into the team and the relationships that are built.

“We try to spend a lot of time together off the field,” Defeo said. “We have team dinners every week and hang out together all the time.”
Despite this inspiring case of team chemistry right here on campus, Paly teams are not immune to toxicity within their locker room. The girls water polo team is an example of what it means to not prioritize bonds between teammates, and ultimately see it as their downfall.

Although they may have not had the best seasons in the past, one of the teams that was pointed out to be one to look out for before this school year was the girls water polo team. With a strong core group of seniors that have been playing all four years at Paly, and an influx of fresh talent from the lower grades, the team was primed for a great season. Yet despite all of this, the team never reached its full potential. This, at least in part, can be attributed to the lacking team chemistry in the team, according to senior Aanya Kumar.

Every team has their challenges, but what matters most is how they deal with them. But according to Kumar, there was little problem solving being done.

“I don’t think we actually really dealt with [the problems that arose] that much,” she said. “I think that’s why we’d have some problems as a team and I think that kind of affected us playing as well.”

Her team captain, senior Julia Ragno, agrees with this assessment of the team.

“I think there were a lot of bonds between teammates but I think there was also a lot of tension as well,” Ragno said. “It can be hard to deal with conflicts in a healthy manner due to the fact that everyone has their own opinions, but overall I think conflicts were able to be resolved in a healthy manner as long as everyone saw their mistakes and learned from them.”

The reason why so many people overlook team chemistry is because they think it might not affect what happens on the court or field or in this case, in the pool.

“It just seemed like everyone was kind of competing against each other, instead of against the other schools,” Kumar said.

Ragno continued to build on this reflection of the girls water polo team. “)i think the main factor that stopped us from exceeding our potential during games was again the lack of cohesion between players in the water,” she said.  I think a lot of the time girls will dwell on a mistake that just happened instead of pushing that aside and continuing to play hard.”

An added dimension to playing sports within times of COVID is that there are less team-building opportunities. This played a key role in the lack of team chemistry, according to Ragno and Kumar.

“We honestly didn’t have many team bonding events as I would have liked, and I honestly really regret that,” Ragno said. “There were a lot more sophomores than in previous years which made it a bit harder to create a super tight knit team due to the fact that a lot of us didn’t know each other coming into the season”

In addition, Kumar explains, “We didn’t seem to have many team parties/bonding like we did [in past years],” she said. “Getting to know each other outside of that competitive atmosphere would have helped us a lot.”

Not every team has to be made up of a group of people that really enjoy each other as human beings, but the general idea is that a sense of respect between teammates is crucial. A perfect example of this is Kobe Bryant and Shaquille O’Neal, who despised each other, but had a mutual respect for one another at the same time, and ended up winning a championship.

At the end of the day, it comes down to which team wants to win more. That team is usually made up of players that are willing to sacrifice personal benefit for the greater good of the team. Kumar points out the lack of this type of attitude within her former team.

Regardless of whether a team is the most talented in the league on paper, or if they are expected to finish dead last in their respective competitions, team chemistry makes an immense difference in the outcomes of the team’s season.

Team chemistry can be the boost to propel teams to success, or the poison that brings the demise of entire seasons. Although largely overlooked, the impact of team chemistry on overall performance and results can be the difference between a championship and an early trip back home.