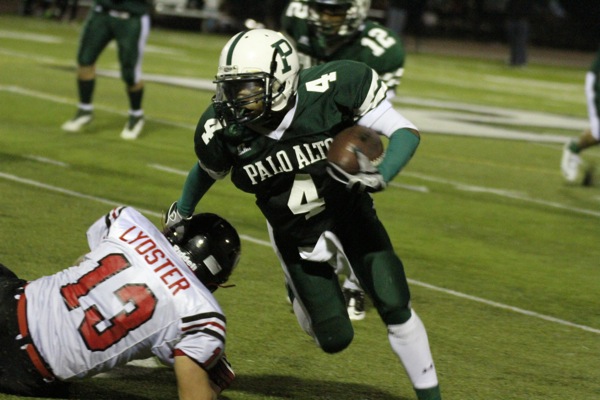 Justin Gates-Mouton ('14) bolts around Sean Lydster ('14) in the third quater of the game.

The Vikes got off to a promising start when Malcom Davis (’14) returned the opening kickoff to the Paly 36 yard line. Taking advantage of this favorable field position, Paly, led by strong running from senior running back Matt Tolbert, began to march down field. However, the drive was halted when quarterback Keller Chryst (’14) was sacked for a loss and Paly was forced to punt.

While the Titans prevented the Vikings from scoring on their opening drive, Gunn was unable to capitalize, handing the ball right back to Chryst and company after going three and out.

Like their first drive, the Vikings had no trouble driving their way deep into Titan territory. This time Paly managed to cap the 57 yard drive with a six yard Tolbert touchdown run. However, in what’s been a recurring theme for the Vikes this season, a mishandled snap on the point after attempt made the score 6-0.

Nevertheless, Gunn’s offense could do nothing with the ball, and it wasn’t long before Chryst was under center again and the Vikes were driving.  Sure enough Chryst found Jayshawn Gates-Mouton (’13) in the endzone for a 28 yard touchdown on their next drive.  A successful two point conversion would follow putting the Vikes up 14-0.

Still not finding any solutions on offense, Gunn continued to stall and punted the ball away throughout the second quarter. Paly on the other hand kept heating up. Chryst found Deantay Williams (’13) for another score but yet another issue with the PAT unit would result in only 6 points (that puts the total of missed PATs on the season at six in only three games). Paly 20, Gunn 0.

Paly would score another two times off two Chryst touchdowns to Tolbert and Davis before the two teams headed off to the locker rooms for halftime. Paly edging out Gunn 35-0 at halftime.

Not losing any steam in the third quarter, Palo Alto’s defense would continue to shut down Gunn’s offense, while the Paly O continued to score with ease.

When the final buzzer sounded the Vikings had defeated the Titans 48-0 for their 10th straight win over their cross town rivals.

“Overall it was good,” he said. “We had a game with no turnovers which is the kind of game that I love. We also got a lot of guys in to get more experience and that’s always a plus.”

The Vikes hope to maintain this momentum when they host Milpitas next Friday at 7:30 p.m..