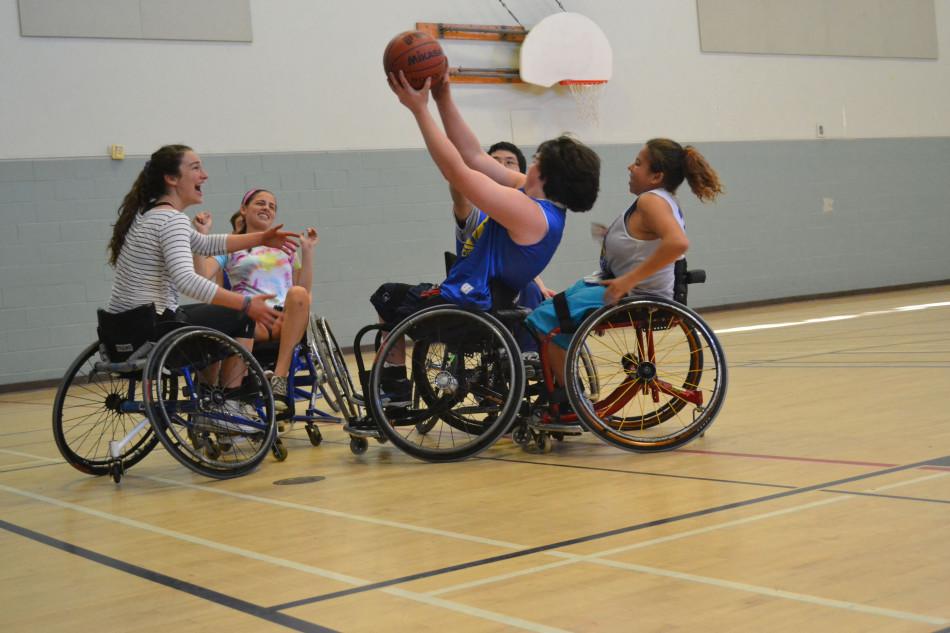 Entering the gym as a swimmer, a soccer player and a runner made us Viking staff members an unlikely group of people to partake in a sport as tough as wheelchair basketball. However, as time went on we found ourselves having been exposed to a supportive community of independent teens and a intense new sport.

Bay Area Outreach and Recreation Program (BORP) was founded in 1976 by two women with disabilities on the UC Berkeley campus in order to create access to recreation and more opportunities for a population of physically disabled people that have often been left out of many activities such as team sports.

The Golden State Road Warriors, the team The Viking practiced with, is coached by nine-time gold medalist Paralympian Trooper Johnson. Players come from as close as down the street to as far as Sacramento to practice with the team every Saturday afternoon at the James Kenney Recreation Center in Berkeley. Many of the players have been playing for years, and some even have Olympic aspirations of their own.

“BORP really blew up as it opened its doors to the community outside of the university,” Johnson said. “They understood the need for the creation of opportunities for those who fell into a group in between the able-bodied population and Special Olympics, and this group of people with disabilities fit into the BORP program perfectly.”

Us three Viking staff members made the trek across the bay to participate in an afternoon of intense physical activity. Walking into a small gym in Berkeley to see no more than 20 people on the court made it nerve-wracking to test our non-existent basketball skills. Yet, despite our intensity and experience, the existing players were exceedingly accepting of newcomers and promptly showed us the ropes.

Wheelchair basketball is essentially the same as regular basketball; however, some aspects of the game must be executed differently due to the presence of the wheelchair. When dribbling down the court, one can touch his/her wheels twice to turn or push themself forward, and then must dribble at least once to prevent being called for traveling. In order to shoot, there must be continuous movement instead of stopping the wheelchair and then attempting to shoot the ball. If one is looking to set up a screen, he/she must roll into position and then stay completely still. Such rules are what make wheelchair basketball slightly different than the commonly-known sport of regular basketball.

Aside from the difficulty of maneuvering the chair and learning the rules, The Viking staff had to come to terms with the very likely possibility of falling over. Nervousness arose upon entering the gym when we were told about how a certain part on the wheel when hit causes a flip. Despite the fact that none of the staff members flipped over, several of the experienced players did, in fact, fall over in their wheelchairs. Our initial shock was quickly replaced with a smile when the other kids laughed it off as though such a fall was a common occurrence.

After taking some time to practice our skills individually, we were soon deemed ready to play in a 3-on-3 tournament. Being placed on teams with the experienced players made for much more competitive games, yet this also allowed us to pick up the difficult sport more quickly.

Playing another staff member placed on a different team increased the games’ competitiveness and provided a positive environment for the us to learn new basketball skills. Despite our little knowledge for the game, we all handled the basketball frequently, as the supportive teammates passed the ball continuously despite our lack of experience. Passing to the us allowed us Viking staff members to gain enough confidence to even score a few points ourselves.

Going into the third game of the tournament we began to feel the fatigue and truly realize how strenuous this sport can be. Not only does the sport require constant armwork, but it also requires the player to stay stable in the chair which puts his/her core to work as well.

Feeling confident about our increased skill once the tournament had finished, we soon realized just how amatueur we really were compared to the experienced players who spend hours a week practicing their beloved sport. The kids who The Viking staff members had grown to know as their temporary teammates shared just how dedicated they truly have to be to play for the team, saying that the Golden State Road Warriors was one of the only well-managed and advanced teams for kids interested in wheelchair basketball.

Seeing that it is the only serious team in Northern California, athletes traveled from places as far as Sacramento or Napa Valley just to play, but all could agree that such an opportunity is well worth the long journey.

Not only are the teens participating in the program to further their skills and because of their love for the sport, but they are also gaining a significant amount of independence by traveling with the team to different places around the nation for multiple tournaments a year. This prompts the growth of confidence in their ability to live on their own and hopefully grow up to become less reliant on others. Nothing has detrimented their ability to maintain aspirations similar to those of any other teenager.

Coach Johnson shared several of his goals regarding the BORP program and what it does to the independence of the student-athletes involved in it.

“One thing I really want to focus on is making sure the kids in this program become fully independent,” Johnson said. I want them to be able to graduate from school, grow up living away from their parents, and be able to live successfully without relying on government support.”

Our involvement in extracurriculars made it easy for them to understand just how important activities such as sports are to be a part of, as they offer opportunities that are difficult to attain elsewhere. Programs like BORP give a sense of pride and positivity amongst an entire community that may struggle to gain acceptance into activities elsewhere, where the dominant force is a group of non-disabled athletes.

Striving towards developing a strong and independent group of young adults, Johnson and his team continue to prove that despite challenges brought about by their physical disability it is still possible to do what you love.

“It’s not getting hurt that is going to define you, it’s how you come back from it,” Johnson said, “There’s a value to getting up off the ground and learning that things aren’t always going to go your way.”