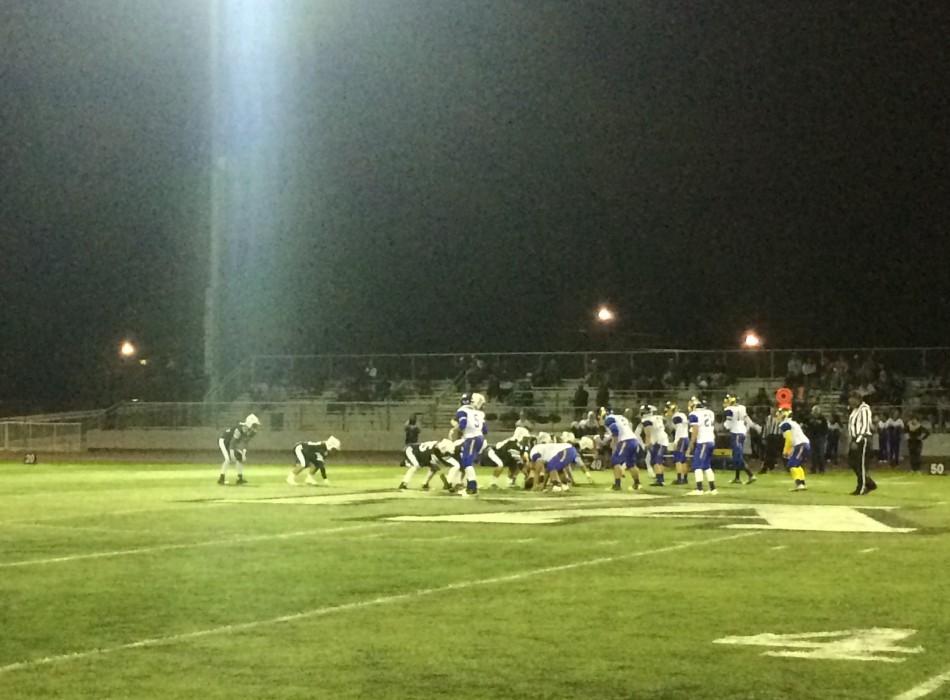 The Vikings dominated the Homecoming game on Friday night against the Santa Clara Bruins. The final score was 55-26.

Coming into the game, the Vikings were concerned about the Bruins’ ability to move the ball.

“They’re a high powered offense,” Justin Hull (‘16) said. “They throw the ball a lot, so you have to prepare for the pass and you have to be ready.”

Head Coach Halas agreed that Paly had to watch out for Santa Clara throwing the ball.

“We knew we had to run the ball and we had to stop the pass,” Halas said. “They throw the ball about 80-percent of the time, 90-percent tonight. That’s what we worked on all week, stopping the pass.”

The Vikings won the coin toss and started the first quarter receiving the ball. Eli Givens (’16) ran the ball back from the Vikings’ 10-yard line to the Bruins’ end zone for the first touchdown of the game. Jose Patino (’16) made the extra point and the Vikings took a 7-0 lead in the first 13 seconds. There was a 15-yard penalty on the return, and the Bruins were pushed back from the 45-yard-line where the receiver was pushed out of bounds. However, the Vikings committed a personal foul and a 15-yard penalty was called on them. On the next play, Thomas Wilcox (’15) sacked the Bruins’ quarterback on the third down, but the Bruins managed to complete a pass on the fourth.

The Vikings regained possession after the Bruins did not complete a pass on their next fourth down.  After several runs by Jayshawn Puckett (‘15), the Vikings had the ball on the Bruins’ 5-yard line. Hull ran the ball into the end zone for a touchdown. Paly scored its next touchdown on an 80-yard play, with a pass to Givens by Hull. Paly recovered an onside kick on the Bruins’ 47-yard line.  After two incomplete passes to Givens, Hull and Givens finally connected on a 44-yard pass for a touchdown. Paly led 28-0 at the end of the first quarter.

In the second quarter, the Vikings scored a single touchdown.  Oliver Svirsky (’16) intercepted the first Bruins pass and ran the ball. Jon Martinez (’15) scored the touchdown from first down and goal. Santa Clara’s offense attacked and moved all the way to Paly’s 11-yard line, where the Bruins scored a touchdown. The rest of the quarter, Santa Clara and Paly each gained and lost possession but neither team scored. In the last play, Paly fumbled the ball and Santa Clara recovered it. Halftime was then called, and the score was left at 34-7.

For the second half, Halas wanted his team to focus on playing strong even though they were in the lead.

During halftime, the members of the senior spirit dance performed their dance.  The dance team and cheerleading team performed a Halloween-themed routine. The band, fully dressed in Halloween costumes, played Michael Jackson’s “Thriller.”

A physical confrontation between the two teams happened after a couple more plays. As a result, three unsportsmanlike-conduct penalties were called. Two Santa Clara players were ejected and one Paly player was ejected. After a long a pause in the game, play resumed with the Vikings at second down. Paly fumbled the ball on the its own 23-yard line and the ball was recovered by Santa Clara. Capitalizing on this, Santa Clara scored a touchdown. A second Paly player was ejected for conduct and Halas received a penalty for saying something to the referee.

Halas was not pleased with the Paly players that were ejected from the game.

“At the end, some tempers flared and that’s our fault,” Halas said. “When you’re beating someone so bad, they’re going to talk trash. You’ve got to ignore it. So that hurt us. Those guys that got kicked out can’t play now. They’re kicked out of the next game. That hurts.”

In the final quarter of the game, the Vikings maintained their lead. Puckett ran after receiving a pass from Hull. A 15-yard penalty against the Vikings decreases the yards gained, but still got them a first down. Puckett successfully ran the ball multiple times again, and in his last run scored a touchdown for the Vikings. With 32 seconds left in the game, Santa Clara scored a touchdown.  The two-point conversion was no good.  The final score was 55-26.

Hull commended the team tonight, but the fight showed something different that the team needed to work on.

“I think we played really well, but discipline: we can’t get into fights like that,” Hull said. “That’s not how we play.”

Puckett was able to run through the Santa Clara offense multiple times and attributes his success to focusing on the end goal of a win.

“After that fight broke out, I knew that we needed to stay strong,” Puckett said. “We needed more consistency so that we didn’t fall off and they didn’t come back. So I just had that in my head, and coach was telling me, ‘Just keep going. Just keep staying consistent and let’s win this game.”

Looking ahead, the team would like to work on putting more effort into practice.

“We need more tempo and more fight Monday through Thursday, not just on Friday,” Halas said. “Our preparation week has got to be better.”

Paly faces Milpitas at home on Nov. 7 for Senior Night.