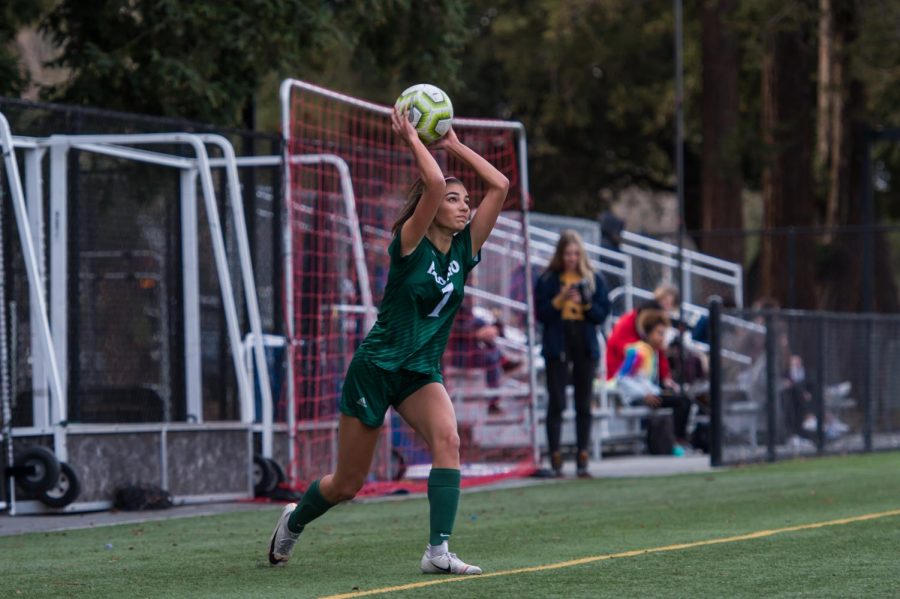 KICKING OFF — Leila Khan ('20) inbounds the ball vs Los Gatos.

The Paly girls varsity soccer team was defeated 2-1 by Los Gatos on Wednesday, in a defensively dominated game.

Palo Alto fell behind early, and couldn’t muster enough opposition to gain a lead. Los Gatos scored two goals in the first half, which put pressure on the Vikings to put up some of their own.

They would begin to increase ball movement and get more shots on goal, but few could capitalize. Towards the later stages of the game, the Vikings had many opportunities to tie the game up, but no one delivered.

Cassandra Taleno-Dee (‘22) would score the Vikings only goal on an assist from Jennie Solgaard (‘21) in the second half, but it was too little too late. This loss comes off the heels of a previous loss to Los Gatos on January 8, which is demoralizing considering the rivalry between the two schools.

The Vikings are looking forward to their final month of the season, where they will look to finish strong against some mediocre teams. Their next game is at Saratoga on Wednesday, February 5.

“We have a lot of games next month,” said Hailey Hwang (‘21). “We’ll probably focus on staying healthy and doing what we’ve been working on since preseason.”