College World Series to the Classroom: Brendan Beck Has Seen It All

At the end of his senior season, Stanford’s starting pitcher Brendan Beck decided to take his career to the next level, and Beck was drafted 55th overall by the Yankees in the 2021 MLB draft. Today, Beck works as a sub at Palo Alto High School, only a block away from his alma mater. 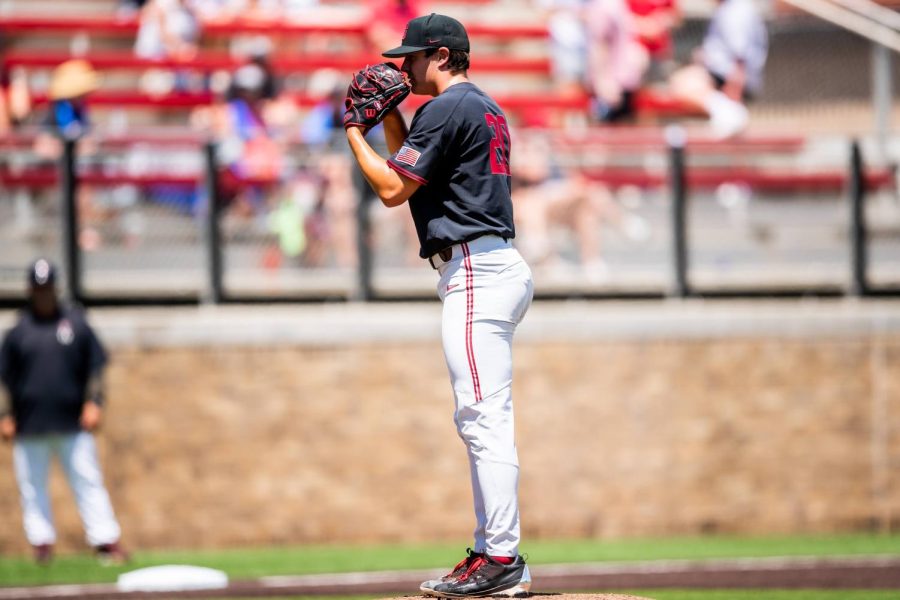 What’s harder – hurling a 95 mph fastball past a hitter, or holding the attention of 32 restless teenagers at the end of a long school day? Not many people have experienced both of these distinct challenges enough to answer this question. But Brendan Beck is one of the few exceptions.

From the time Beck started at Stanford, he was a standout player, starting all four years and being one of the four Cardinal players to make the Pac-12 All Conference Team as Pitcher of the Year. For Beck, his experience playing at Stanford went beyond just the game.

“My favorite part of the Stanford Baseball experience was forming relationships with my teammates and coaches,” Beck said. “Our team culture is so strong and the people within the team are my best friends.”

Being a high level student-athlete was a constant challenge, and taught Beck a lot about time management.

“I learned a lot about myself in terms of my priorities and staying calm mentally when there’s a lot on my plate,” Beck said. “I would advise student-athletes entering college to reflect on their priorities and what type of working is best for them.”

In 2021, Stanford baseball traveled to the College World Series in Omaha, Nebraska. Beck said that the opportunity showed that the demanding schedule of school and baseball was well worth it.

“Pitching in the College World Series was a dream come true,” Beck said. “When you play for a major program like Stanford, that’s the goal every year, and getting to achieve that my senior year was special.”

The College World Series presented an opportunity for Beck to perform in front of a full crowd, an experience that had been stripped away due to the pandemic.

“Playing the whole season in front of limited crowds and different Covid restrictions made playing in front of 20 thousand plus people all the better,” Beck said. “I wish I had pitched a little better, but the experience itself was something I’ll remember forever, and wish I had the chance to do again.”

The rest of 2021 proved to be a monumental year for Beck’s career. In addition to leading his team at the College World Series, he was presented with another opportunity to take his career to the pro leagues.

“Getting drafted was crazy,” Beck said. “I knew the morning of the draft that the Yankees were really interested in me, but I didn’t actually have 100% confirmation I was going to be a Yankee until my name got called…It was an awesome way to wrap up my college career and begin my professional one.”

During this recent off-season, Beck has been busy training at Stanford and rehabbing from an elbow injury.

“The rehab process is slow but it hasn’t impacted the lifting aspect of the off-season too much, and it’s been nice to be back around the guys on the team and have a chance to go see other teams play,” Beck said. “Stanford offers everything I need, and I’m really happy to have been in a program that works with the alumni the way that Stanford does.”

With the MLB lockout stopping practically everything going on in the sport, many professional baseball players have had to adjust their lifestyle. Luckily for Beck, however, the lockout has not affected him or his training, due to the fact that he is currently a minor league player.

“It’s weird that the sport is essentially shut down, but then again the off-season is a time where it’s up to you how much you want to work on the game, so the lockout hasn’t changed that aspect much,” Beck said.

To keep himself busy while not training, Beck decided to become a substitute teacher at Paly. Through his degree, he was qualified to get a substitute credential, and after going through some clerical details, he got the job.

“I decided to work at Paly because of its location in relation to Stanford, and because my mom has been a substitute teacher most of my life, so I was familiar with the job,” Beck said. “I had a lot of downtime, so I figured the hours and ability to make my own schedule was a good gig.”

Throughout his time spent at Paly, Beck has enjoyed connecting with the Paly community.

“The best part about working at Paly is the ease of working with the students,” Beck said. “They know exactly what work they need to do and are generally very focused and work well with each other… I look forward to being here more often.”

Beck has high hopes for his baseball career, and looks forward to what the future of playing professionally holds.

“I’m most looking forward to making my major league debut and hopefully competing for multiple World Series’,” Beck said. “It will also be really special to have the chance to play against some of my former college teammates.”

The Paly community can look forward to watching him on national television in the near future, but for now you might spot him around the Paly campus.