Mrs. E: Not Your Typical Trainer

Athletic Trainer Justine Iongi — known to students and coaches as “Mrs. E”— plays an integral role is the lives of Paly Student Athletes from the moment they first step on the field. 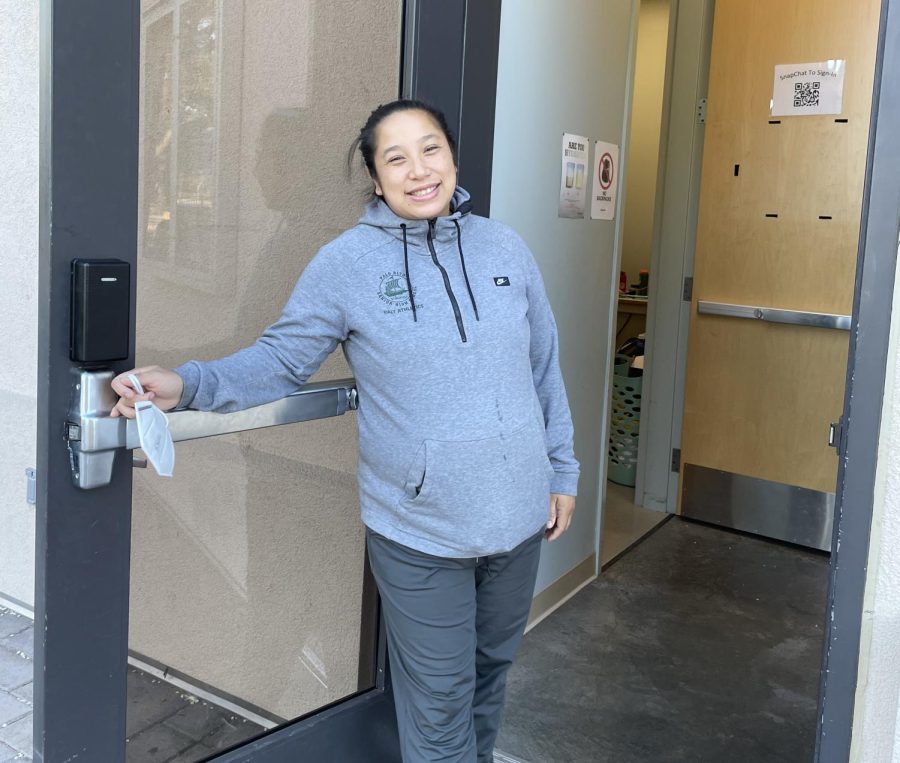 Known across Paly’s campus as Mrs. E, athletic trainer Justine Iongi has made a long-lasting impact on Paly’s athletic community due to the meaningful relationships she has built with students and the commitment and love she shows towards athletic training. Students from all sports and grade levels have benefited from the warm and welcoming environment of her office and ultimately Iongi has left her mark at Paly, on both athletes and students working side by side with her.

Iongi started her athletic training career at San Diego State University. As a student, Iongi had expressed interest in sports medicine and as a part of getting her degree she was required to take an intro to kinesiology course. Her original interest was vested in physical therapy and rehabilitation, but as the class progressed and she was exposed to more hands-on, front-line experience, Iongi’s passion shifted toward becoming an athletic trainer.

“You see it firsthand who gets involved, you’re on the sideline, you triage, you’re first on the field so that was something I wanted to do more,” Iongi said.

Her experience at San Diego State is what led her to first fall in love with athletic training, and after getting both her bachelor’s and master’s degrees, Iongi continued to work in Division 1 and Division 3 level athletics as well as for various club teams. Since then, Iongi has worked as Paly’s full-time athletic trainer since 2015 and hasn’t looked back.

The diversity of the job keeps Iongi on her feet, and is an aspect of her job that she enjoys and feels can be lacking in other fields. From volleyball to wrestling, not only are the sports themselves diverse, but some days Iongi does administrative work and if she finds herself tired from being inside, she’ll walk around and check on the athletic practices.

Iongi enjoys how her hours deviate from a typical nine to five job with her typical workday beginning towards the end of the school day and ending late into the night as she tends  to athletes and before, during, and after their practices and games. Due to her unusual hours spent as Paly’s athletic trainer, Iongi, a mother of three children, has learned to balance her home life with her work life. Her unique hours allow her to spend time with her kids in the morning before she comes into work, although she often faces challenges working late nights as Paly’s only full-time athletic trainer.

Because it is an after-school program, athletics is often a very family-friendly area and Iongi often brings her kids into work with her, allowing them to both spend time with her and athletes in her office.

“It’s fun to take the kids, Iongi said. “There’s always a high school kid who wants to play with my kids.”

In the end, being the sole athletic trainer for thousands of athletes has proved to be a struggle for Iongi to give everyone the time they need, and she relies greatly on support from her husband.

“It’s hard,” Iongi said. “I am the only athletic trainer and I oversee over 1000 athletes in all three seasons. There’s one of me. [Athletes have] seen firsthand that it gets crazy. It could be like an hour before somebody gets to really talk to me and they have to wait for my attention, but there’s a balance.”

Because Iongi often works right alongside athletes on their journey to recovery, whether it is shin splints or an ACL tear, her work with her athletes manifests right before her as she sees athletes get past their injuries and continue to thrive again, not just in their sport but in their everyday lives.

In addition to helping student-athletes physically, Iongi has fostered strong social and mentor-like connections over her time at Paly. Helping some athletes with various injuries all the way from the beginning of freshman year to senior year, she develops a special relationship with these athletes, unlike any other Paly staff member. Iongi considers this to be one of her favorite parts of her job.

“I get to meet and see how [my athletes] change and how [they] grow,” Iongi said. “If I work with you for a specific injury and see you get past that, it’s fun to see you actually excel knowing that you did everything.”

This has been the case for senior two-sport varsity athlete, Danny Peters. Peters, the starting quarterback for Paly’s football team and a pitcher and third baseman for the baseball team, has had his fair share of injuries over his time at Paly, making him a frequent visitor of Iongi’s office.

“Every year I have gotten closer and closer with her,” Peters said. “Over four years I would consider her one of the most supportive people in my life.”

Part of what makes Peters’ relationship with Iongi special is her devotion to help students with challenges beyond physical injuries. When Peters struggled with anxiety on the field, Iongi was able to help him work through them and be the best version of himself.

Aside from connections built with injured athletes, Iongi provides a unique opportunity for some Paly students who are interested in the field of sports medicine, allowing them to volunteer and work with her during the week and to witness the front-line efforts she makes for Paly Sports Teams.

This year, when you enter the training room, it is likely that you will see the current student athletic trainer, junior Isyss Grant. Grant has dedicated numerous hours of time and service each week, exploring her passion for sports medicine by helping Iongi treat athletes. The time spent with Iongi has allowed Grant to build a close-knit relationship with her and ultimately forged a long-lasting bond.

“She is like my second mom,” Grant said. “She teaches me so much, I consider her my mentor.”

Grant’s work in the athletic training office has created a unique partnership while relieving Iongi from some of her countless duties. Through Iongi’s learning valuable lessons and skills up close, Iongi and Grant have formed an irreplaceable partnership.

“She is Batman and I am kind of Robin,” Grant said.

Grant has found so much joy through her work with Iongi that she now plans to study in the sports medicine field and hopefully find a career similar to Iongi’s, in the athletic training field.

The Paly Athletic training office is open to all student-athletes and provides a variety of services including injury evaluation and treatment. In addition to athletic injuries occurring during practice, Iongi and the student trainers can help support pre-existing conditions and long-term injuries, as well as serve as a mediator between your doctor and sports team. Paly is lucky to have access to a variety of tools and treatments that are rarely available in a high school setting, and athletes across the school are encouraged to take advantage of these resources. Whether stopping by for a quick foam roll-out, ice pack, or a session of Game Ready, Iongi and her team provide a warm, welcoming environment for Paly students and encourage athletes with any type of injury to take advantage of the unique resources Paly has to offer.

Iongi’s impact at Paly is seen far beyond helping rehabilitate injured athletes. The community she has built within her office and the relationships she has made with students are what make her role at Paly integral to the athletic community.