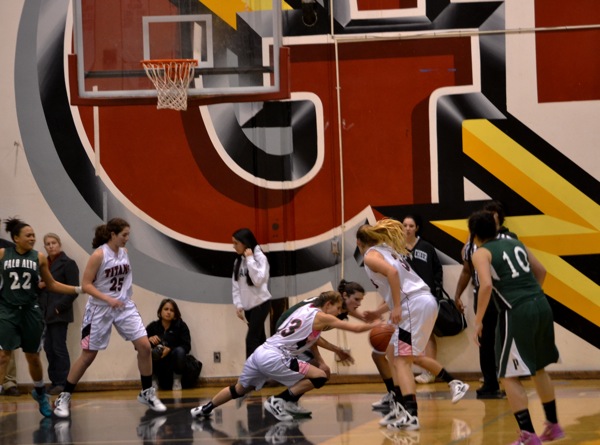 Annie Susco ('13) battles the ball away from a Gunn attacker.

The Palo Alto High School girls’ basketball team fell to Gunn High School on Wednesday, 52-42 in the rivals’ second meeting of the season.

Lindsay Black (’12) led Paly’s press, forcing turnovers in the black court, but the Lady Vikes were only able to start off with a 4-0 run in the first quarter with lay-ups by Josie Butler (’13) and Emilee Osagiede (’12). Sloppy play limited both team’s scoring, and the first quarter ended with the score 4-4, after Titan’s Emily Redfield (’13) put away jumper with eight seconds left.

Gunn started the second quarter strong, with a layup from Meghan Mahoney (’15) and a three pointer from Olivia Tapia (’15). Black responded, but Redfield hit another to maintain Gunn’s lead, 11-8. Gunn continued to build their lead, and lazy mistakes from Paly aided their effort. Zoe Zwerling (’14) hit a key three to make the score 19-14, but Lady Vikes’ Abby Strong (’14) came up with a block at the elbow and drew a foul on the opposite end of the court. She only made one of two, however, and on the next possession, Stephanie Allen (’13) picked up her third foul. Paly’s airballed threes left them unable to mount even a small comeback in the remaining 3 minutes of the half, which ended by the score of 20-16. 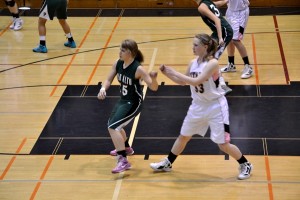 Sam Borsos ('12) fights off a Gunn defender in an effort to get open for a pass from her teammate.

Allen’s three to start off the half brought Paly within one, 20-19, but Zwerling immediately responded with two in a row, notching Gunn’s lead back to seven. Allen picked up her fourth foul with 6:52 left, and didn’t return to the court until much later on. Gunn’s physical defense left the Lady Vikes without any rhythm on offense, until a previously called back three by Annie Susco (’13) was deemed acceptable as it was attempted before the shot clock expired. Lady Titans’ Julia Maggioncalda (’12) immediately responded however, putting Gunn back into the lead, 31-24. Black responded on the next possession, making it 31-27, but Danielle Palmer (’14) committed a costly foul. Paly was unable to attempt any meaningful shots in the last three minutes, and the third quarter ended by the score of 33-27.

Only one minute into the fourth quarter, Zwerling gave three points to Gunn and followed up with a steal on the next possession. After more back and forth scoring, Gunn took the upper hand once again, making the score 40-29 before a Paly time out with 5:15 left. Allen would then score again before colliding with another player, picking up her fourth foul. With 3:39 left Black hit a jumper at the free throw line to make it 40-33, but Claire Klausner (’13) responded with the same on the ensuing possession. 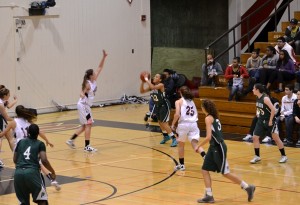 Allen hit a three with 2:21 left, after a Black kick-out. The team was then forced to foul, and with Gunn in the bonus, Perez hit both from the charity stripe, extending Gunn’s lead to 14. Black’s jumper was blocked, and Paly’s possession came up empty. Klausner made both of her free throws, and again, Paly’s shot attempt was unable to hit rim, as Black’s floater in the lane airballed. Zwerling continued the Titans’ dominance at the free throw line, making both of hers. Osagiede hit a three with a minute left, but it was unable to mount a comeback, as Klausner’s two free throws hit the bottom of the net as well. Butler’s three with 14 seconds left was too little too late, as Gunn prevailed 52-42.