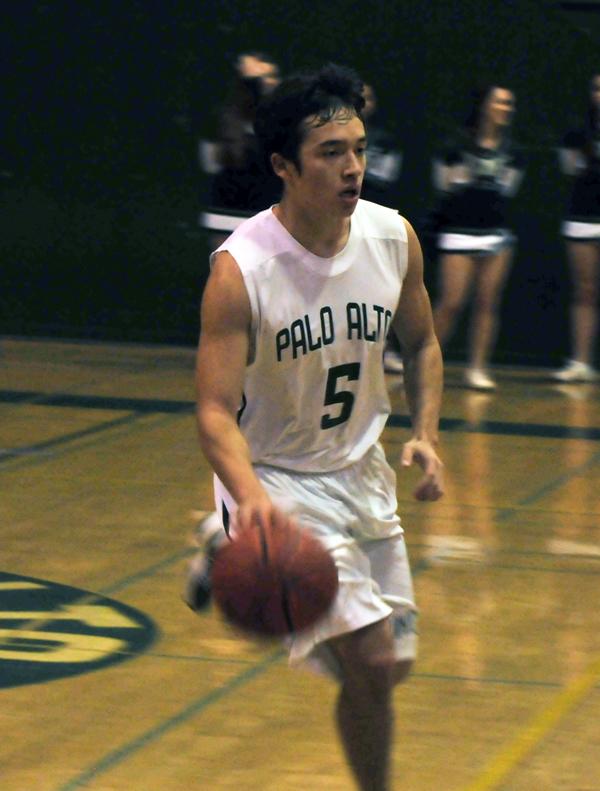 The Vikings improved to an overall 14-1 record and captured their 12th consecutive win Tuesday after a decisive, 56-25 victory over the Cupertino Pioneers.

Paly was led by center Keller Chryst (’14), who posted a team high 17 points in the Viking’s victory.

Coach Adam Sax was pleased with how his team, following Chryst’s lead, got going early in the game.

“Keller got a lot of rebounds [and] easy baskets early, which kind of set the tone for us.”

The opening quarter featured some messy play from both teams, until Paly’s forward Aubrey Dawkins (‘13) hit a pair of free throws to open up the scoring.

From there the Vikings took control of the game as  Cupertino turned the ball over multiple times and  Paly capitalized by going on a 10-0 run. The offense continued to roll as it put up 19 points in the first quarter. However, the bigger story for the Vikings was their stout defense, which held the Pioneers to just four points in the first quarter.

The Vikes carried their momentum into the second quarter as they quickly extended their lead to 24-4. With seconds left in the half, Cupertino still hadn’t found  a solution to the Vikes’ overall play, and managed to score eight total points to the Vikings’ 19.

Cupertino was never able to come back from the large deficit in the second half, even after Sax rotated in his reserves. Paly continued to outscore the Pioneers and led 50-19 entering the fourth quarter where they completed the rout 56-25. With the victory the Vikes moved to 5-0 in league play and solidified their spot at the top of the De Anza League standings.

Sax acknowledged the added pressure his team now faces as the season progresses.

“We got a target on our back,” he declared. “We’re in first place right now.”

The Vikings will travel to Los Gatos on Friday night, in hopes of keeping their winning streak alive.