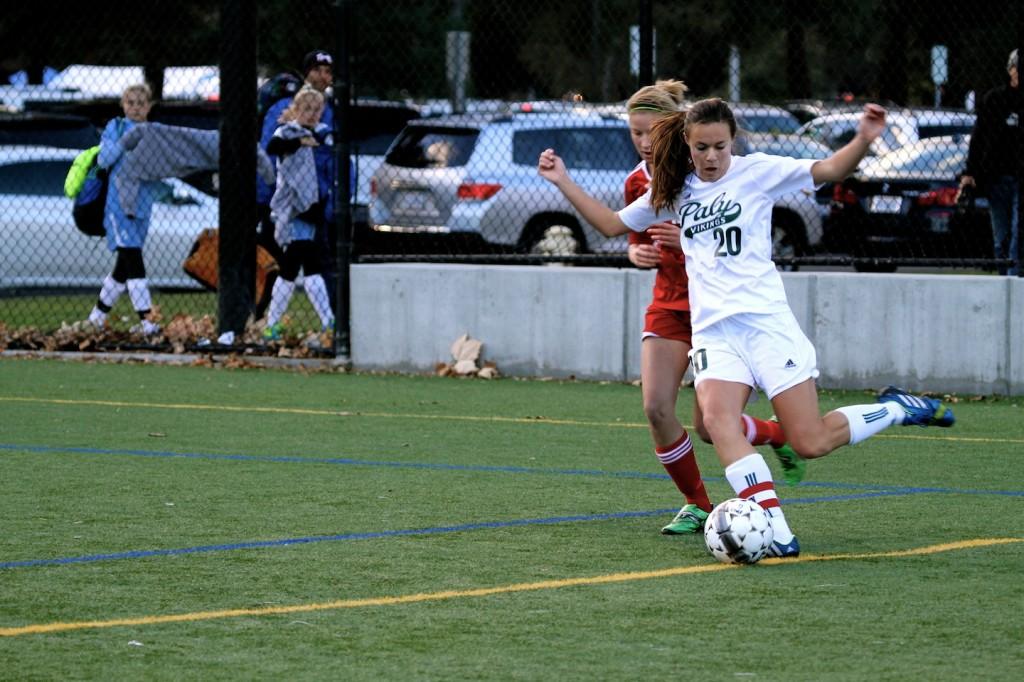 On a chilly Saturday afternoon, the Vikings had their first win of the season against the San Benito ‘Balers, 2-0.

“Our first half was really strong and we got chances and we finished them,” captain Megan Tall (‘14) said. “We definitely let ourselves go in the second half and are really disappointed in how we played.”

The game started off with back and forth passing until the ball was passed through the defense to Katherine Shan (‘15). Shan sprinted after the ball and had a break way. As she headed towards the goal, the San Benito goalie came out and Shan kicked the ball into the bottom left quarter of the net for a goal, bringing the score to 1-0. Aoi Sugihara (‘15) was tripped from behind and there a foul on the play. Sugihara set up for a free kick as the San Benito players formed a wall in front of the goal. Sugihara kicked it over the wall, and the ball sailed into the top right corner of the net for a goal. Paly led 2-0 at the end of the half.

The second half was scoreless. “We had two clear cut chances [to score] and we missed,” head coach Kurt Devlin said.

Even with the first win of the season, Devlin was unhappy with the play of the second half.

“We did great in the sense that we won our first game of the year and we didn’t so well because our play wasn’t to the standards or the ability that the girls can play to,” Devlin said. “But to be fair to them, they’ve played a lot of games in a short amount of time and they were really tired today and it showed in the game.”

Tall was glad for the first win of the season and hopes it will set the tone for later games.

“We definitely needed a win just to start off our season better because we had two losses before this so I think its going to give a positive outlook on the games to come,” Tall said.