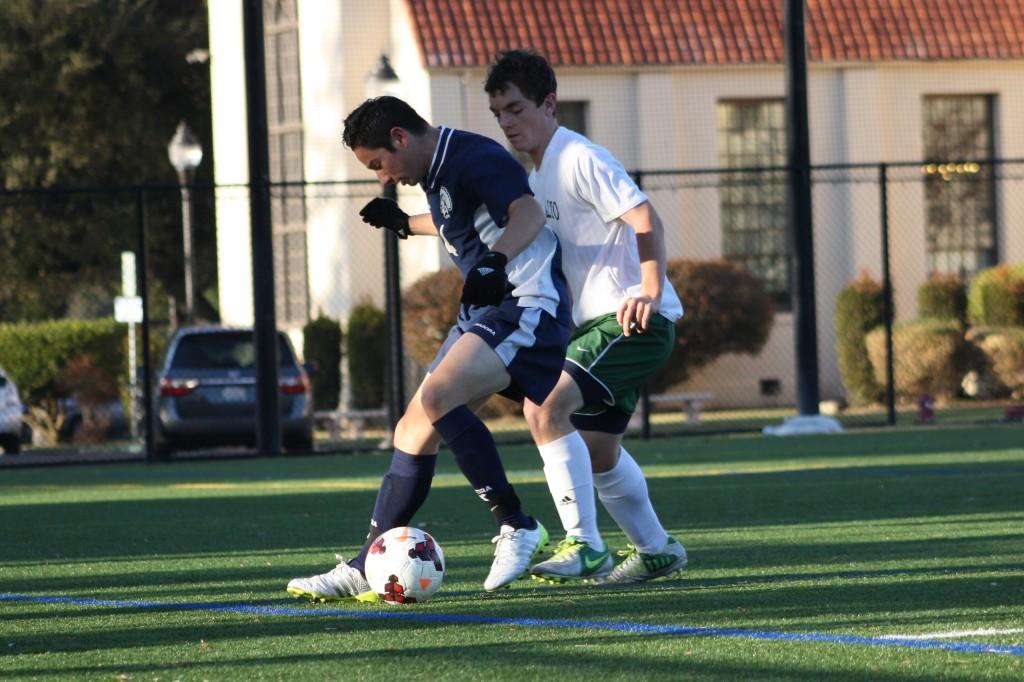 Preston Kuppe ('15) attempts to steal the ball from the Milpitas Trojans. The Vikings went on to tie the Trojans 1-1.

Boys’ soccer tied Milpitas High School 1-1 in its third game of the season.

“We came back one down, which shows the character of the guys,” assistant coach Amir Malekpour (’13) said. “We kept hustling and didn’t back down with a one goal deficit, and we just got the goal back.”

The game began with attacks on the middle by Dami Bolarinwa (‘16) and Preston Kuppe (‘15). Despite the pressure on defense, defenders Steven Blatman (‘15) and Jack Brook (‘15) managed to clear the ball out of the Vikings’ side. The boys had several breakaways leading to several missed shots by Cina Vazir (‘14) and Bolarinwa.

“[In] the first half, we started out with a couple opportunities and we didn’t finish,” head coach Don Briggs said.

Midfielder Wesley Woo (‘15) made several attacks on the goal. However, Milpitas’ goalkeeper put Woo to a stop.

“In the middle of the first half and towards the end, they were dominating, and it looked like they were about ready to score,” Briggs said.

The Vikings were tied 0-0 against Milpitas at the end of the first half.

Heading into the second half, the team looked to continue to fight against the Trojans.

“Everything’s really vertical as far as our passing goes, so we need to work on just holding onto the ball a little longer and working the ball in their half a little more because everything right now is counter-attack,” Vazir said.

As the second half went on, Milpitas began pressuring the Vikings’ defense. Driving past Paly’s defenders, Milpitas scored the first goal of the game, leading them 1-0.

“After they scored that goal, we really started playing better and were passing more,” Briggs said.

With increased pressure by the midfielders and forwards, the boys forced more offense on Milpitas’ goal. Woo brought the ball down the field and passed it to Bolarinwa, who shot and scored; bringing the score to a 1-1 tie.

“I think we brought the intensity to the game; our defense was tight, I liked that,” Vazir said. “Offensively, everything was quick, everyone really wanted the ball and everyone seemed like they wanted to win. There’s just some tactical stuff we need to work on.”

Malekpour advocates the smaller leeway the Vikings have since moving up a league.

“We’re not going to get a lot of chances during the season since we’re in the higher league now, so we need to execute with the chances we do get,” Malekpour said.

The Vikings will play in the Oak Grove tournament this Friday afternoon at Oak Grove High School.