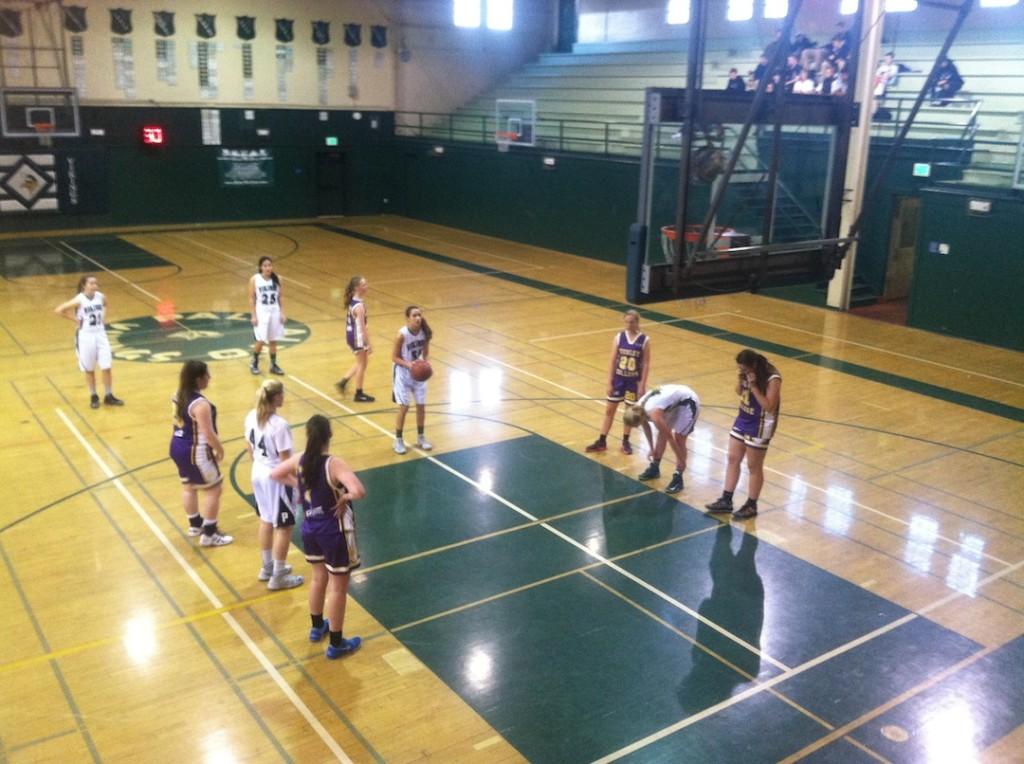 The Palo Alto High School Girls’ basketball team dominated Wesley College 68-31 in Vikings territory on Tuesday evening. The Vikings’ strong offensive side contributed to the constant lead they maintained throughout the game.

In the first quarter, the Lady Vikes immediately grabbed a lead of seven points. Amelia Schmarzo (’17) scored a three-pointer, contributing to the Vikings’ lead. However, Wesley College refused to allow Paly to gain a larger lead, trailing 12-11 as the quarter went on. The Vikings ended the first quarter with a 15-12 lead.

“I think we started off really rough,” point guard Maddy Atwater (’16) said. “But it got better as the game went on.”

A breakaway layup by Coco Lovely (’16) started off second quarter, bringing the score to 19-14. Throughout the quarter, Paly  kept the momentum on their side of the court.  Three-pointers from Atwater and Jackie Moore (’17) helped the Vikes earn a 36-20 lead in the end of the second quarter.

“We did a better job on defense this game than we’ve done in the past,” Lovely said. “We played hard and hustled the whole way through.”

Entering the third quarter, Atwater dribbled around multiple opposing players and passed the ball to Julie Chandler (’17) for a layup.  Lauren Koyama (’17) had a key three-pointer and Maya Lathi (’17) scored two consecutive free throws, helping Paly lead 53-28 at the end of the third quarter.

Siggi Bengston (’16) started off the fourth quarter with a three-pointer, bringing the score to 59-30. Reciprocating their play throughout the game, Paly continually maintained their significant lead and conducted multiple offensive plays on their side of the court. Chandler scored a free throw after sinking a layup and getting fouled; she also made a three-pointer later in the quarter. With a basket by Skylar Burris (’17), the Vikings defeated Wesley College 68-31

“I think we learned a lot, we’re working on getting better on a few defensive techniques [but] the girls are playing hard,” head coach Scott Peters said. “We’re asking girls to do things that they haven’t done as much before so they’re trying as hard as they can.”

The Lady Vikes will participate in the Pinewood tournament this week and are scheduled to play a game each day until Saturday. They will also travel to Gilroy on Monday for a game at 7:00 p.m.