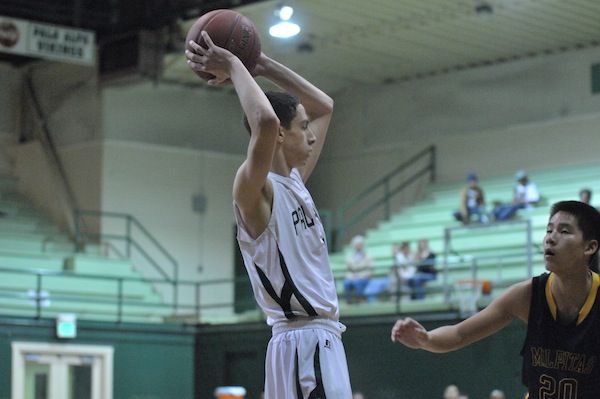 On Friday night the boys’ basketball team dominated the Milpitas Trojans in the Vikings second league game of the season.

The first quarter started off fast for the Vikings with Clark Schmutz (‘14) scoring a deep three pointer in transition off of a Milpitas turnover. Milpitas countered scoring their own three pointer. The Vikings’ momentum continued as they scored twice more before being followed by a Milpitas basket.

Schmutz found the net once more followed by Kevin Mullin (‘15) scoring his first points of the game. Following a timeout Milpitas came back strong scoring its second three pointer of the game. The quarter ended with the Vikings leading the Trojans 18-12.

Jonathan Rojahn (‘15) hit a deep jump shot to start off the second quarter. Following a Milpitas basket, Keesean Johnson (‘14) put up two baskets, scoring his first four points of the game. Heading into the half, Milpitas scored six more points but with additional points by Noah Phillips (‘14) and Mullin the Vikings held onto their lead. The quarter ended as the Vikings led 36-27.

The Vikings dominated the first few minutes of the third quarter, scoring seven points. Following a basket by Milpitas, both Schmutz and Rojahn each found the net again. Mullin scored twice more followed by Milipitas’ final two baskets of the quarter. Phillips scored the final points of the quarter, bringing the Vikings’ lead to to 53-49 going in to the fourth quarter.

Milpitas started the fourth and final quarter off strong after finding the net for their first points of the quarter. After several more baskets from both teams, Mullin and Johnson both scored one free throw each to help the Vikings finish the game with a win as they defeated Milpitas 66-56.

The Vikings were pleased with their performance and are looking optimistic towards their future games.

“I thought our team played really well,” Mullin said. “When we hit shots, it’s really hard to lose for us because we shoot a lot of three [pointers]. It was a pretty good start to the league because we are now 2-0.”

Schmutz agrees that the team did well, but sees several areas where improvement would be beneficial.

“I think we played well,” Schmutz said.”We shot the ball well, played hard on defense, and did all the little things. [For future games] I think we’re gonna work on being in the right spot on defense and not making the mental lapses.”

The Vikings will play its next league game on Wednesday, January 15 at 7 p.m. at Los Altos High School.