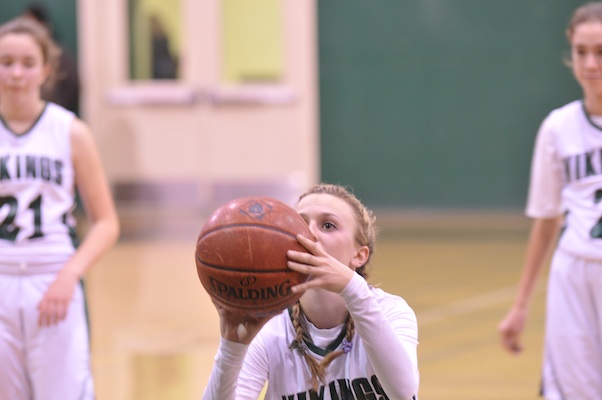 Maddy Atwater ('16) prepares to shoot a free throw for Paly. Atwater plays both center and wing for the Lady Vikes.

The Lady Vikes put on a dominating performance during Friday nights game coming back from its first loss of the season.

“We suffered a rough loss on Tuesday, so it was a nice bounce back,” Maddie Atwater (‘16) said.

The game started off strong for the Vikings, with Skyler Burris (‘16) scoring the first points. After continued possession by Paly, including a breakaway by Courtney Lovely (‘16), Milpitas brought the score up to 10-2. The Lady Vikes ended the first quarter leading 16-5.

“We started out a lot stronger this game, and I think we need to keep that up for the next game,” team captain Hope Crockett (‘14) said.

Milpitas scored the first basket of the second quarter, but was quickly faced with rebuttal when Paly gained back possession. With points by Alexis Harris (‘16), Lauren Koyama (‘16), and Siggi Bengston (‘16), the Lady Vikes maintained control over the ball throughout the second quarter. Despite a few comebacks by Milpitas, including two points scored within five seconds of one another, Paly lead 29-11 at the end of the first half.

“We just need to not get down on ourselves because we’re so young,” Atwater said. “Our biggest opponent is ourselves.”

In the second half, the Vikings’ determination continued.

“I thought we played with great energy, hustle… I was very happy with the way they played,” coach Scott Peters said.

“We need to just keep staying relaxed when we play, and trust each other and believe in ourselves and how good we play,” Peters said.

The Lady Vikes will take on Lynbrook High School next Tuesday.