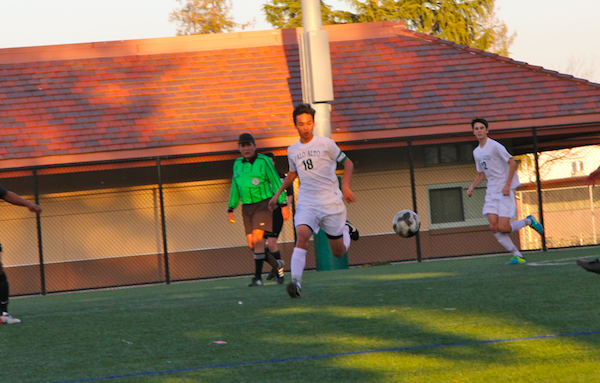 Wesley Woo ('15) follows the ball after a throw-in. Despite their long fought effort the Vikings fell to the Mountain View Spartan's 3-2.

Boys’ soccer faced a loss against Mountain View on Friday after a previous victory one week prior.

The game begun with a close match between Paly and Mountain View. Dami Bolarinwa (‘16) became injured after going for a header, but quickly recovered and went back into the game. Cina Vazir (‘14) had an intricate play, running on to Bolarinwa’s flick, but was blocked by the Mountain View center backs. The Spartans made an attempt to score, but goalkeeper Tony Maharaj (‘14) pulled off the save.

“We played pretty well throughout the game, but there was still ten minutes left in the first half when we fell through,” Vazir said.

Although Maharaj made a save on the first attempt, he pushed the ball into the oncoming Spartan strikers’ path who finished with an easy tap in. The Spartans added to their lead through a long range effort, bringing the score up to 2-0 at the half.

“In the second half, we changed the players up a lot… our general intensity changed, we just played a lot better and were more physical,” Vazir said.

The Vikings started off the second half with a goal, courtesy of Bolarwina, to make the game 2-1. After the goal, Paly began to settle down and midfielders Sid and Bolarinwa made a number of incisive runs.

“We just had a couple of defensive mistakes that we have to work on,” coach Don Briggs said. “A defender would leave the group to try to help out, and then if he got beat then they would come at us.”

Just as Paly was about to tie the game, an inswinging Mountain View corner was tapped in to make it 3-1, Spartans.

Despite the setback, Paly began to increase the pressure on the Spartans. Xavier Sherer (‘15) made the score 3-2 in the latter part of the second half,  scoring a volley from outside of the box. With increased pressure on Paly’s box, Maharaj made another good save and cleared the ball from the Vikings’ side. Despite having a free kick, the Spartans cleared the ball from their half. Maharaj made yet another critical save, stretching to his limits to keep the ball out of the net. The game ended with a 3-2 loss for Paly.

“The team needs to keep playing the way we did this game… This game, we really came together as a team and played well,” Sherer said.