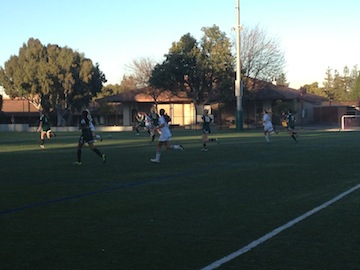 Megan Tall ('14) running after the ball in the Homestead third of the field. Tall would go on to score in the Viking's 4-0 win.

The Paly girls’ soccer team played against a competitive Homestead side, but eventually won out 4-0 after a flurry of goals from the Vikings in the last ten minutes of the match.

The game began with even pressure from both sides. Katie Foug (‘15) and Sunny Lyu (‘14) dictated the game from the center of the pitch for the Vikings, playing balls for Jacey Pederson (‘16) and Captain Megan Tall (‘14) to run on to. Heidi Moser (‘16) was another threat for the Vikings, putting pressure on the Homestead goalkeeper numerous time.

Yet despite the wealth of attacking options the Vikings had, the team’s first goal came from left-back Julia Kwasnick (‘14). Kwasnick had a series of chances from corners before half-volleying a ball whipped in from the corner to take the Vikings up, 1-0.

“We really were not creating a lot,” Assistant Coach Eric Seedman said. “But we could see that their marking was not good, so I was not surprised. Julia was in the right place at the right time.”

Despite Homestead’s efforts, the Vikings were able to maintain their shut-out against Homestead. Goalkeeper Sarah Lim (‘15) was caught out on the edge of her own 18-yard box, but managed to grab the ball that had been crossed in before the Homestead striker could finish.

Going into the halftime break, the Vikings knew they needed to tweak their style of play in order to get the win.

The communication payed off, with the Vikings creating a series of chances right from the get go. On one particular occasion, Pederson combined well with Lyu and Foug to break the Homestead defense but was marshaled out for a corner by the Homestead center-backs.

The breakthrough moment came in the last ten minutes of the game. Midfielder Tess Presing (‘16) latched on to a through ball after a series of give-and-gos and finished into the top right hand corner to give the Vikings the all-important second goal.

“The second goal was absolutely huge because it gave us a chance to relax,” Coach Seedman said.

With one eye on Friday’s game against league-leaders Los Gatos, the Vikings made a number of substitutions to rest key players. But, the high level of play remained throughout and the Vikings soon had another two goals.

Tall ran on to a Foug through ball and finished across the keeper to take Paly up, 3-0. Pederson then added to the lead after a turn by Lyu put her past the Homestead defence. Lyu then passed it to Pederson who finished past the goalkeeper to take the score to 4-0.

The lady Vikes will play this Friday at Los Gatos at 3:30.