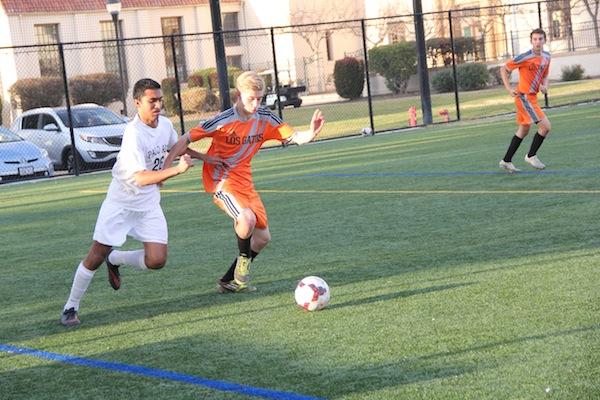 After attempting to come back from a loss, boys’ soccer fell to Los Gatos 2-0.

“All games have been the same,” Dami Bolarinwa (‘16) said. “We’ve been able to move the ball, we just can’t finish in the third. We have to learn how to shoot outside the box, and get comfortable with that with the pressure on us.”

The game began with continued pressure by the Vikings on Los Gatos’ goal. After Los Gatos attempted to take the ball down the left side of the field, they were blocked by defender Thomas Crouch (‘17). Although Paly and Los Gatos maintained equal dominance over the ball, with a breakaway down the side of the field the Cats were able to make a quick cross into the center and get the ball past goalie Tony Maharaj (‘14).

An assist by Fernando Rodriguez (‘15) put the ball at the feet of Wesley Woo (‘15), but Los Gatos’ defense was able to clear the pressure from their half. After the ball was brought into the Vikings’ half, a failed clearance by Neal Biswas (‘14) gave the Cats the opportunity to bring the score up to 2-0. Continued shots were blocked by Maharaj, as Paly brought back control to end the half.

“We always play better when we’re down, because we get more motivated,” assistant coach Amir Malekpour said. “We need to start finishing the chances we get, and we need to start shooting.”

The Vikings went in the second half with more intensity, as they put more pressure on Los Gatos’ side. An assist by Cina Vazir (‘14) to Woo lead to the ball being put in the goalie’s hands, but Paly managed to keep the ball in the Cats’ half.  After a breakaway by Los Gatos, they took a corner but the ball was quickly cleared from the half.

Although Paly attempted to score with shots by Bolarinwa and Vazir, the team was unable to come back from their two-point deficit.

“Coming back from all our losses, we need to work on our finishing,” Preston Kuppe (‘15) said. “We get a lot of chances, but we just don’t score on them.”

The Cats’ pressure on goal was again stopped when Crouch cleared the ball out of Paly’s half. After a continuation of shots on goal, the Vikings were unable to come back from their two-point deficit and ended the game with a 2-0 loss.

The team will go up against Los Altos next week.